The recent brutal assaults on Diaspora Jews, on social media, and in-person should open everyone’s eyes to the danger of hollow conversions to Judaism. Hollow conversions not only often lack basis in Jewish law, communal affiliation, and the most basic standards; most importantly, they leave our fellow Jews vulnerable to attacks, abuse, harassment and deprive them of the safe space they all deserve. The most recent assault on the Jewish state and on what it means to be openly Jewish in the public sphere highlights the profound vulnerabilities that come with the “all conversions are equal” attitude that has dominated our public discourse over the past few years. The current harsh reality has shown us that not all conversions are equal, and not all converters are equal.

Let me begin with converters.

Shortly after operation Guardian of the Walls Began, Rabbi Rick Jacobs, President of the Union for Reform Judaism, put out a strong statement imploring American Jews to show “solidarity and love” for our brethren in Israel and to combat the negative way in which Israel is often portrayed in the general media. As an orthodox rabbi, there is very little I share with Rabbi Jacobs on matters of Jewish law and theology; while I would not agree with a reform conversion from a halachic perspective, I would know that if Rabbi Jacobs set a standard of conversion and someone converted to Judaism under those auspices, that convert has a clear understanding of our shared destiny when joining our people.

By contrast, shortly after operation Guardian of the Walls Began, 100 other progressive rabbis and rabbinical students signed a letter that was highly critical of Israel. The letter stated in part:

“Our institutions have been reflecting and asking, ‘How are we complicit with racial violence?’ and yet, so many of those same institutions are silent when abuse of power and racist violence erupts in Israel and Palestine.”

The letter calls for education in the Jewish community that teaches “the messy truth” about Israel, as well as changes to how Jewish institutions fund Israeli causes and advocate for Israel politically.

“When we vote, we can vote for leaders who won’t continue paying lip service to peace while funding violence…We can use our position as citizens of Israel’s biggest benefactor to push to regulate and redirect funds in equitable ways that promote a peaceful and just future.” 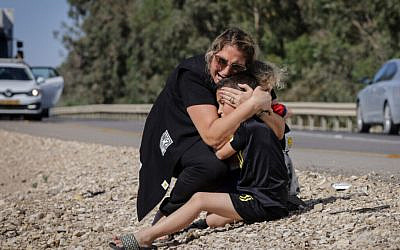 A woman and child take cover as a siren sounds a warning of incoming rockets fired from the Gaza strip in the city of Ashkelon, southern Israel, on May 19, 2021. Photo by Olivier Fitoussi/Flash90

The latter was later criticized for its one-sidedness and its complete disregard for the fate of millions of Israelis sitting in bomb shelters to the Hames’s violent assault and effort to eradicate the Jewish state. As an orthodox rabbi, I had many respectful interactions with rabbis of other denominations, and I am always happy to work with others to advance the good of our people and work on shared causes. Yet, unlike many other non-orthodox rabbis, those who signed a letter stabbing Israel in the back in times of war, these rabbis lack a shared and commitment to our shared destiny. We share little in faith and little in fate. The audacity of any of these rabbis to have the expectation that the Israeli government–or any other Jew–accept their conversions and input on the future of Jewish people when they cannot muster the decency to show sympathy to millions of Israelis huddled up in bomb shelters cannot be overstated.

Rabbis from across denominations must assess that there are standards of commitment to the Jewish people and our shared peoplehood. We will never agree on all matters of Jewish law, theology, and practice. Yet, there is nothing binding us together if we cannot agree on our most basic right to life and existence. As an orthodox rabbi, if I met someone converted by Rabbi Rick Jacobs, I may not commission them to write a Torah scroll for my shul, but I would do everything I can to help there and be there for them. There is a shared fate that we now have. If, on the other hand, I met someone who merely identifies as a Jew or that has been converted in a hollow conversion by a rabbi to whom our shared fate has very little meaning, to those, I would say we have nothing that binds us together. Sadly, the 100 rabbis and rabbinic students who signed the now infamous letter have shown there is nothing that binds us together.

Yet far more critical than any rabbinic discussion of conversion is the safety of Jews who have been targeted for their Judaism like we have not seen in more than a generation. From Eve Barlow as an example to millions of other Jews—especially young Jews—mobbed on social media for being Jewish, we have seen the mental and physical harassment of Jews for who they are. The ugliest forms of age-old antisemitism have surfaced and been viciously hurled at our fellow Jews.

As many antisemites would not express their genocidal aspirations outright, most of the vitriol was hidden behind hating “only” this kind of Jew or the other. Most commonly, the age-old hate is now disguised as hate for “Zionists” and not for Jews. This is how children in schools and students in universities were told that their friends don’t want to sit next to a Zionist, rather than being ostracized our right for being Jewish.

Adding to this pain was the resounding silence of bystanders and the lack of a strong, broad social condemnation of antisemitism. After all, the hateful attacks were not on Jews; they were on Zionists. Especially painful were then several individuals claiming to speak “as Jews,” attacking Jews who believe in Israel’s right to exist and telling other Jews why their pain is misguided and their beliefs illegitimate. As discussions intensified, it became clear that many of those using their Judaism to attack other Jews have never had any kind of conversion to Judaism; they identified as Jews.

The concept of cultural appropriation does little to capture horrifyingly egregious moral crime committed by those using an assumed Jewish identity to attack the members of the group which they claim to be part of. The abhorrently grotesque idea that someone should claim to be a member of one of the most vulnerable groups in the world, just to be able to attack its own members from within, defies words. Lacking the most minimal standards of conversion, these individuals used their illegitimate “identifying” as Jews to attack other Jews.

Being Jewish in precarious times highlights the impracticality of a no-standards-entry, Judaism. While we will never agree on what exactly the standard for converting to Judaism may be, we must all agree that there is a standard. While some denominations may put more of an emphasis on faith and others on fate, we must all agree there need to be strong standards. The idea that joining Judaism means one is committed to some kind of universal belief in goodness, social justice, or decency is void of any meaning. Most people in the world are good people with good values, that does not make them Jewish. There must be something very particular about the Jewish experience, one that speaks to a deeper connection to Judaism and the Jewish people. The path to Judaism must be one that has only a door in and no door out. Simply put, if you have a way of slipping out when things get tough, you probably should not be with us. Easy come, easy go should never be a likely scenario; if it is, then you should probably never come.

As an orthodox rabbi, I will continue to adhere to orthodox standards of conversion to Judaism; never will I ignored our shared fate as Jews or our shared faith. Knowing people who have irreversibly cast their lot with my people, I will treat those people accordingly because of our shared fate. Similarly, while I share not fate with the rabidly anti-Zionist and anti-Jewish Neturei Karta affiliates, I do have a shared faith with them. This faith ties us with a bond that transcends our unbridgeable divides of fate. Yet when it comes to those who share no fate or faith with me, they are not my people. I will stand by my people through fire and water, be it those who share a fate, faith, or both with me.

What we must never allow is for those who share neither with us to weaponize the possibility of joining the Jewish people against other Jews. Accepting hollow conversions, or worse yet, those who simply identify as Jews makes other Jews more vulnerable and denies them the safe space they deserve. Rabbis, communities, and individuals must make it very clear that being part of the Jewish community comes with a belonging—and a commitment. Hollow conversions that lack standards of faith, or fate, betray the letter of the law, the spirit of the law, and make our people vulnerable. The incessant attacks on Jews in the past few weeks, and the deafening silence of broader society, must remind us—rabbis especially–of our obligation to be there for our people and safeguard them from the most brutal forms of cultural appropriation.