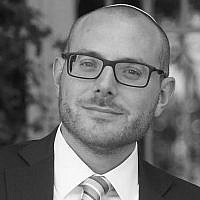 The Blogs
Jason Pearlman
Apply for a Blog
Advertisement
Please note that the posts on The Blogs are contributed by third parties. The opinions, facts and any media content in them are presented solely by the authors, and neither The Times of Israel nor its partners assume any responsibility for them. Please contact us in case of abuse. In case of abuse,
Report this post.

Tuesday’s election could well spell the end for Religious Zionism. Pure and simple. As a community, we have handed the keys over to a fringe group with extreme views. They have spewed vitriol and extremism into the mainstream of the movement, and turned what was once an open and welcoming face of Judaism into a symbol of hatred and discrimination.

When Rabbi Shimshon Raphael Hirsch wrote, “The more the Jew is a Jew, the more universalist will his views and aspirations be… the more joyfully will he applaud whenever he sees truth and justice and peace,” he could never have had in mind being represented by a political party that rejoices in hateful slogans, discriminatory rants, and sometimes open acts of violence against fellow citizens of the state.

The inciteful acts and words of Itamar Ben Gvir and his ilk have time and again lit the tinderbox of religious tensions in this region. Their outspoken disdain and active disregard for LGBT rights in particular have made all those in Israel who do not conform to their very narrow views feel deeply uncomfortable. And they do so, supposedly representing the ideals and aspirations of the Religious Zionist community – the community that believes dearly that Israel is our inheritance from God, that the Torah and the teachings of our rabbis should guide us in this world, and that ultimately, the truest expression of Judaism is to live and work in the Land of Israel.

As one who was brought up in a Modern Orthodox home in the UK, who made Aliyah, and who lives today in a National Religious community in a wider mixed city in Israel, who is raising children in the National Religious school system at some of the movement’s largest and most prominent institutions, this situation is utterly devastating and deeply concerning.

The policies the Religious Zionism Party have proposed include the trampling of the institutions of democracy, the near overturning of an independent judiciary – and constitute a clear and present danger to our civil rights.

Yes, I know, “but others also have extreme positions, and even incite hatred and drive political division”. But that doesn’t make it right, and yes, we should be better. We who have been brought up to understand the need to balance our relationship with God and our relationship with those around us – as the Ten Commandments themselves so elegantly succeeds in doing – should know better.

However, if the “Bibi-Bloc” succeeds in this election, the reality of the equation will be, that to support a Greater Israel will be, by association, to deny the civil rights of many citizens of our own state. If this bloc succeeds, the reality will be that to be part of the institutions of the National Religious community will be to sign up to, adhere to, or at best, turn a blind eye to, an extreme interpretation of our faith that is far from the ideals of Modern Orthodoxy.

Such a victory may well put the right wing in complete control, but it will be a pyrrhic victory, with no legitimacy or credibility on the international stage, and even less at home. The communities and parties that supposedly make up the base of this camp will capitulate under the lack of legitimacy of their undemocratic designs. The National Religious community in particular will be – if it is not already – utterly divided. Its institutions will split, and its unity which has always been its strength, will be torn apart.

That all said, I don’t actually blame Ben Gvir, or even Smotritch for the situation in which we find ourselves. Behind this puppet act of the rise of Ben Gvir lies Netanyahu. The Likud under his iron grip has stoked the fire and politically maneuvered the pawns on the chess board to ensure that Ben Gvir and his party were united, and assured to cross the electoral threshold.

When Meir Kahana was elected to the Knesset, Shamir’s Likud walked out – along with all the other parties – whenever he would speak from the podium. However, the Likud under Netanyahu is not only embracing the ideological descendants of Kahana’s extremist views, it is promising them senior ministerial positions. Surely the Arab Israelis who work as doctors, nurses, teachers – even serve in the army and police – surely they deserve to work for a civil service not headed by ministers who openly call them enemies of the state.

For many, this has been the final straw, but sadly, perhaps not many enough.

There is of course a party that includes strong right-wing voices, and that party is HaMachane HaMamlachti, the National Unity Party, headed by Defense Minister Gantz, and led by key voices such as Justice Minister Gideon Saar, who has heralded a revolution in judicial reforms; former Religious Affairs Minister Matan Kahana, who promoted unprecedented progress in opening up religious services across the country; and MK Sharren Haskel, one of Israel’s first female combat soldiers, who has tirelessly fought for a secure Israel with strong ties to the Diaspora.

This is the party where many former Likud voters – and indeed MKs – now find our home. But as we look to build a better future for Israel, and a strong democratic and Jewish state, we look back at our supposed co-ideologists, at our former co-party members, and we see a sinking ship riddled with holes, sacrificing all ideals and aspirations, destroying bridges with other nations and our own people in the Diaspora, all in the name of one man. A man who seemingly doesn’t care what Israeli society looks like, how healthy it is, how open it is, how democratic it is, as long as he is in the driving seat.

I am not prepared to sacrifice my community, and neither should you.

About the Author
Jason Pearlman is a strategic consultant and media advisor specializing in communications and campaigns.