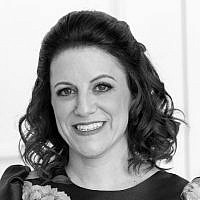 The Blogs
Rachel Goodman Aspler
Apply for a Blog
Please note that the posts on The Blogs are contributed by third parties. The opinions, facts and any media content in them are presented solely by the authors, and neither The Times of Israel nor its partners assume any responsibility for them. Please contact us in case of abuse. In case of abuse,
Report this post.

For the past several weeks, my mother has been foremost in my thoughts. My mother, Sylvia (Karwaser) Goodman, is a child survivor of the Holocaust. Like so many other seniors during this pandemic, she is living alone, as she has done for the past 15 years since my father, z’l, was moved into a nursing home. He passed away seven years ago after a long and valiant fight with Parkinson’s disease.

Before this pandemic, my mother had slowed down from a very active lifestyle but continued to socialize with her devoted children and grandchildren, with her best friends of more than 65 years, and she regularly attended lectures and classes, among other activities. Now, like so many other seniors, she is locked inside, trying to fight off the isolation, boredom and loneliness.  She is fighting the brave fight, spending her time reading, watching television, and listening to classical music, and of course, enjoying video and phone calls with her family who hover over her from a distance. You may ask, what makes my mother’s situation so unique? Is this not the case for millions of seniors around the world right now?

In November 1942, living in war-torn Belgium, my grandparents, Cyril & Gertrude Karwaser were very worried about their safety, and especially the safety of their only child, Sylvia, a toddler of only 2 years of age at the time. They, along with several other Jewish families in the neighborhood, entrusted their child to a non-Jewish woman who suggested that they give her their valuables and their children for safekeeping. The next day, the woman called the SS, who came and handed out candies to all the children, my mother included. My mother, known to be a picky but polite child, received a green candy. She hated all things green, but she was taught never to talk back to an adult and placed the candy in the pocket of her pinafore, or apron on her dress.  All the children died immediately. They had been poisoned. My mother was the sole survivor. The woman called my grandparents to pick up their daughter. That day, my Bubbie was in her kitchen crying when the landlady, Madame Pontus came to collect the rent. She found my Bubbie crying, and after hearing the story, immediately offered to take their daughter into hiding with her and her husband, although they were already an older couple in their sixties and they would be putting themselves in grave danger.

Between November 1942-September 1944 my mother was hidden by this saintly Christian couple, Alida and Charles Pontus, while her parents were interned in Caserne Dossin Malines, a transit camp to Auschwitz where most prisoners stayed only one week (but my grandparents survived for 2.5 years).  The Pontus family, who were recognized by Yad Vashem as Righteous Among the Nations in 2006, shared what little they had with this little girl and they treated her like a beloved granddaughter. They rescued her toy doll from her parents’ apartment where they were the landlords, they retrieved a photo of Sylvia with her father and they helped Sylvia say a prayer each night for her parents’ safety.  During this time in hiding, she always knew that she was missing her parents, yet she describes feeling surrounded by love and by family and was made to feel safe during a time of extreme danger.

Now, in the year 2020, my mother finds herself locked-in once again so that she remains safe from the ravages of this virus. Of course, I do not dare compare the relative ease of staying at home and self-isolating today to the perils and hardship that she faced during the Shoah. Thanks to my sister and brother and their spouses, who live in the same city as my mother, she has home-cooked meals delivered regularly, her laundry is being done for her, and her grandchildren offer her IT support on demand. And there is so much more they have done for her that I cannot even describe in words and for which I am forever in their debt.  My mother has all 10 of her grandchildren calling her regularly to just “chat with Bubbie.”

It is ironic that after the seeing the miracle of being saved, of being one of the lucky ones to survive and in finding a family and community that has embraced her that today – she is genuinely alone.  The hardest thing for me through this pandemic was watching my mother go through the process of coming to accept the fact that she would be alone for Pesach Seders this year.  Growing up, Pesach in our house was my favorite holiday, filled with family, my mother’s gourmet cooking after hours of preparations and a Seder filled with harmonious singing, lively conversation and time-honored traditions. Although my father was always the consummate leader of the Seder, my mother was at the heart of the Seder, singing along despite her lack of a Jewish education, and beaming at her children, and later at her grandchildren delivering divrei Torah and singing tunes that she knew by heart. This would be the first Pesach Seder that she would spend alone in 75 years, and we could not accept this possibility. Initiated by her oldest grandchildren, we held a pre-Pesach Zoom Seder, joining together with all our families to ensure that Bubbie spent the Pesach Seder with all of her children and grandchildren, using the wonders of technology to cancel the distance that divides us. Thirty years ago today, my sister, Ayala and I participated in the March of the Living 1990, paying tribute to all those who had perished, and thanking G-d that we had the opportunity to spend Pesach and all other days with our mother and grandparents who had survived. Fortunately, we had the memory to hold onto this year, of a new miracle of a green candy which occurred just last Pesach in Israel. We had the great fortune to travel to Israel to celebrate my brother’s son’s Bar Mitzvah. At the Kotel on Thursday morning of Chol Hamoed, our mother began to feel weak, and a relative gave her the only candy she had, a green lollipop. What saved her life 78 years ago by true miracle and intervention of G-d now came full circle, and in the Holiest place on Earth, at the Kotel, she was reinvigorated by a similar green candy, this time, to watch her grandson have an Aliyah to the Torah at the Kotel, and for her son and grandsons to bless her and the entire Jewish People with Birkat Kohanim.  At this time, we think of the millions of Jews who were slaughtered, and the many Survivors, including our grandparents, who embodied strength and love and pride in their Judaism.

While I don’t think my mother allows herself to think about “being chosen to survive,” when so many others perished with no explanation, this is something that resonates with me on a daily basis, that my entire family would not be here if it was not for that direct miracle by G-d and the generosity of spirit of one incredible couple. My mother does know well that she has been truly fortunate to continue to live and have lived a full and extraordinary life of building a Jewish family along with my father, who live Torah observant lives making Chessed a priority, after appreciating the Chessed of others that saved my mother and allowed us to come into being.   My mother chose the selfless career of teaching students French for over 35 years, and we are all now more aware than ever of the extraordinary patience it takes to be a teacher.  She has shared her survival story with numerous audiences over the years, both young and old, focusing especially on imparting the lesson of the Pontus’ legacy that one can make a difference and stop bullying in its tracks by choosing not to be a bystander, but instead to stand up for another.

It breaks my heart to know that this year, on Yom Hashoah, my mother will not be standing in front of a classroom sharing her inspiration, her strength and her resilience with the younger generation.  So instead, I share my mother’s inspiration with you. My mother, like so many seniors, may currently be physically isolated, but she is NOT alone. She has her family, her friends, her community. I have never felt so far away from my mother, despite being just a 5 hour drive away.

The message that I will take away from this Yom Hashoah, in these challenging times, is the inspiration of ALL Holocaust survivors, my mother included, who have endured such tragedy, and who have chosen to live life to its fullest, and continue to do so daily, including today, on Yom Hashoah, in spite of the difficulties of the day. During this crisis, although we must allow our children and ourselves to express our genuine feelings of loss and sadness, we need only to look to our survivors to find inspiration from their choices and their examples as to how they choose to live in the present moment, no matter what challenge that moment presents. We should find comfort in the knowledge that one day soon, please G-d, we will be together once again.  Wishing my mother and all survivors who today may be extra lonely, the best of health and a long and vibrant life.

About the Author
Rachel Goodman Aspler is a wife and mother of 3 children living in Montreal, Canada. Rachel is a clinical psychologist in private practice, specializing in working with stress and trauma, as well as memory and memory wellness. She is the co-Associate Director of the Jewish General Hospital's Alzheimer's Risk Assessment Clinic. She is the child and grandchild of Holocaust Survivors and Holocaust Education and Remembrance are among her passions.
Related Topics
Related Posts
Comments