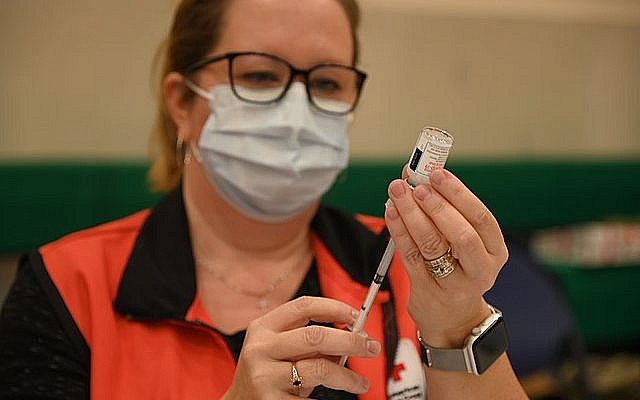 Giving the vaccine for covid-19

Remember us for life,
Sovereign who delights in life,
And inscribe us in the Book of Life,
For Your sake, God of life.
(Prayer for life, recited many times on Rosh Hashanah and Yom Kippur,
translation from Mahzor Lev Shalem)

On the upcoming Jewish High Holidays of Rosh Hashanah and Yom Kippur, which are just a few weeks away, we will say this prayer very often. It reminds us that we as Jews are meant to be a people who cherish and sanctify life. According to a recent survey, Jews are the strongest religious group in America when it comes to taking vaccines for the COVID-19 virus, not only to protect their own health, but also to demonstrate their concern for others, for the health of the general public. Yet, in Israel and America (and around the world), there are still thousands—if not millions—of vaccine deniers, among them many Jews, who not only endanger their own health but also the health of people in their communities and their societies.

How is this possible? How is it that there are still so many anti-science Jews (and others) – both fundamentalists and secularists — who deny science and live in their own fantasy worlds, with little concern for how their irrational and dangerous behaviors cause illness and death to spread, and deter the efforts of the rest of us to end this pandemic?

There are many answers offered for this phenomenon. One reason given is that these anti-vaxxers feel that the vaccines may be harmful to their health. This is based on misinformation or disinformation on various social media and on news sites like Fox news, which reject the statements of the established medical communities in Israel, America and elsewhere. The people and institutions who distribute this misinformation apparently have other sources of authority, other than the established medical communities.

Other reasons given for this are political, especially in the USA. Former president Trump was –and perhaps still is—the leader of this political anti-establishment trend. It dominates the reactionary Republican party—a party that used to be led by sane and moderate people—which has governors in places like Florida and Texas who are leading the way in creating policies that are responsible for surging hospitalizations and death rates in their societies.  The anti-vaccine craze now dominates the Republican party, so much so that their leaders are now directly  responsible for many unnecessary deaths in America. They try to sell themselves as pro-life when it comes to abortion, but when it comes to public health and eradicating this pandemic, they are clearly pro-death! This is why the few sane people who are left in Florida (my home state) are calling their crazy governor DeathSantis instead of Desantis.

The other argument you often hear from the anti-vaxxers is a reference to freedom of speech. Nothing could be more bogus than this argument in the present pandemic. This has nothing to do with freedom of speech. This is related to freedom of action. Their request for freedom of action in this matter is like asking the law to allow drunk driving or driving without seatbelts. These personal acts violate the freedom to endanger others and are therefore logically against the law in the entire world. The acts of anti-vaxxers represent a clear and present danger to the rest of us, and should definitely be outlawed. Legislation should be passed about this right away in Israel, America and everywhere else.  These people are guilty of crying fire in a crowded theatre.

The Nobel prize winning economist and columnist for the New York Times , Paul Krugman, got it exactly right in a column in that newspaper entitled The Quiet Rage of the Responsible a few days ago when he wrote:

Getting vaccinated and wearing a mask in public spaces aren’t personal choices. When you reject your shots or refuse to mask up, you’re increasing my risk of catching a potentially deadly or disabling disease, and also helping to perpetuate the social and economic costs of the pandemic. In a very real sense, the irresponsible minority is depriving the rest of us of life, liberty and the pursuit of happiness.

I am writing this blog post  partially  in response to Krugman’s plea for the responsible majority to speak up about this phenomenon.

At the end of Yom Kippur, we ask God—in a slightly revised version of the prayer above– to seal us in the Book of Life. We are a people who seeks to live in this world, and with the help of God—and science—we can do this, despite viruses and other threats to our health, which have been conquered by amazing medical achievements in recent decades.

Yet, in the meantime, so many thousands of anti-vaxxers and mask deniers will be sealing themselves –and many other people– unnecessarily in the Book of Death or of serious illness. This is so sad, since it is totally preventable. Their irresponsible behavior needs to be censored by religious, cultural and political leaders, who also need to pass legislation preventing them from teaching our children or working in our public health systems.  Also, if they don’t want to be part of the responsible majority, they should not be able to send their children to public schools, nor they should not make use of public hospitals where only the latest advances in science will paradoxically perhaps save them from their self-inflicted illnesses.

It is time for hypocrisy and blasphemy to end, so that together, we can all do our part to help put an end to this pandemic.   As it says in the one of the central prayers of the High Holidays”

May we all be bound together, carrying out Your will wholeheartedly.