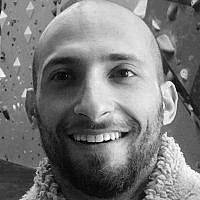 The Blogs
Elan Cohen
Apply for a Blog
Advertisement
Please note that the posts on The Blogs are contributed by third parties. The opinions, facts and any media content in them are presented solely by the authors, and neither The Times of Israel nor its partners assume any responsibility for them. Please contact us in case of abuse. In case of abuse,
Report this post.

My grandfather was born in Jerusalem in 1924. Located in the Fertile Crescent, Jerusalem is one of the oldest continuously inhabited and most fervently contested cities in the world. It sits atop the Judean Mountains at the intersection of Asia, Africa, Europe, and the Arabian subcontinent. As a result, the region has many names in many languages. Despite the significant influence of over 650 years of Turkish rule (Ottoman and Mamluk), most locals of all religions had been Arabized by the 600 years of Arab rule that had preceded the Turks. They called it “Falastin” in the local Arabic dialect and “Palestine” in English, the language of the British, Palestine’s most recent conquerors. Palestine is in the southwestern region of the Levant (Bilad al-Sham in Arabic), which by the time of my grandfather’s birth, had been divided between the British and French empires after the fall of the Ottoman Empire six years before.

In the patchwork of ethno-religious neighborhoods of Jerusalem of the 1920s and 30s, my grandfather’s crowded courtyard neighborhood in Nahla’ot was called the Urfali neighborhood. My grandfather described the Urfalim as “Syrian Jews who spoke Arabic really well.” For my grandfather, the product of a lifetime of Arab-Jewish wars, Arabs and Jews were two separate people. “Arab Jews,” or “Jewish Arabs,” were not a part of his vocabulary. Instead, he referred to people like himself as “Jews of the Arab World” or “Arabic speaking Jews.” Nevertheless, many of them might have called themselves “Musta’ribi Jews” (Arabized Jews), or simply “Arab Jews.” However my grandfather’s family roots were not in Urfa, Syria, or the Arab World at all. They were perhaps ancient Canaanite in part, but so are the roots of most Palestinians and Israelis of all religions, regardless of more recent ancestry. His grandparents had immigrated from Iran, where the family had lived for thousands of years. They came to Palestine at the turn of the century in the twilight of the Ottoman Empire, and they identified as Persian. My grandfather was an Arabized Palestinian Persian Jew, the second generation in his family raised in Palestine.

In his crowded, deeply religious home in the Urfali neighborhood of Jerusalem, my grandfather spoke Hebrew, Persian, and Arabic. Some of his neighbors spoke Aramaic and Kurdish. When in the villages surrounding Jerusalem he spoke Arabic. In school he spoke Hebrew. Jerusalem itself would have sounded a cacophony of languages representing the Abrahamic faiths of the world, Christianity, Islam, and Judaism.

In the first 24 years of my grandfather’s life, discontent under British colonial rule, waves of Jewish immigration from Nazi occupied Europe, and competing Jewish, Palestinian, and Arab nationalisms plunged the country into a civil and regional war that would turn my grandfather into one of the emerging State of Israel’s legendary warrior spies known as “Mista’arvim,” most famously depicted in the Israeli television show “Fauda.”

“Mista’arvim” is a Hebraicized word from the Arabic “Musta’ribin.” Understanding the history of these terms tells us something critical about the striking ways in which many Jews either embrace or reject Arab identity. “Musta’ribin,” in Arabic, traditionally refers to people who have been Arabized throughout history, who identify themselves with Arab culture, and essentially become Arab over the course of generations. The vast majority of Arabs of all religions are in fact Musta’ribin (Arabized people). But the Hebrew “Mista’arvim” carries with it another meaning, one of inherent violence. It is a weapon of war and a tool of deception. “Mista’arvim” are Jewish Arab spies. At the heart of this deception is the appearance that the Mista’arvim are taking on Arab identity. But the deeper implication of this term is that they are in fact rejecting it. Mista’arvim (spies) were Musta’ribin (Arabized people) before being recruited for war. They came from Arab societies and Arabic speaking homes. What they learned when they became agents of the Jewish state is not how to “become Arab;” this they already knew as Musta’ribin. What they really learned was how to falsify their Arab identity as a weapon of the state, how to profess Islam under false pretenses, how to use different dialects and live a convincing fraudulent backstory. Thus, while the term “Musta’ribin” is an embrace of both Arab and pre-Arab (in this case Jewish or Hebrew) identities, the term “Mista’arvim” implies that no matter how Arab a Jew is, his Arabness can not be authentic, only a façade.

My grandfather’s colleagues were born in places like Syria, Egypt, Palestine, Iraq, and Yemen (like my grandmother’s parents), where their families had lived for many generations. They were all Musta’ribin who became Mista’arvim — spies who identified as Arabs while under cover — but rejected Arab identity when living their true “authentic” lives as Jews. Nevertheless, they found ways to embrace Arab culture, as many Israelis do today, as long as it was not identified with Arabs, but rather with “Mizrahim,” an Israeli ethnic category that includes Arab Jews but is also broader. For example, Persian, Bukhari, Amazigh, and Kurdish Jews are also Mizrahim. “Mizrahim” means “Easterners” in Hebrew. On one hand this category can be seen as an empowering term of solidarity for many Middle Eastern Jews in the orientalist societies of the West and of Israel, where the influence of the largely Ashkenazi state-building generation and the national conflict with the Arab World have contributed lasting ethnic inequalities among Jews. On the other hand, depending on its use, this broad category can also be used to generalize, promote ignorance, and erase, especially when used by non-Mizrahim, similar to the term “Oriental” in English (“Oriental” itself meaning “Eastern”).

It may be no surprise that Israeli society is rife with anti-Arab racism, or that this would cause many to dissociate themselves from Arab identity. Within a single generation, perhaps two, the vast majority of Jewish Musta’ribin have been de-Arabized. Many Mizrahim today identify also as Persian, Kurdish, and other ethno-linguistic groups. Many identify as Moroccan, Yemeni, Iraqi and almost every other modern Arab nationality, except of course Palestinian. My grandparents, like most Palestinian Jews, ceased to identify as Palestinian with the establishment of the State of Israel (though my grandfather continued to identify as Palestinian when undercover). But very few identify as Arab, and many reject the term “Arab Jew,” if they have even heard of it at all. Very few speak Arabic anymore and most have never heard the term “Musta’ribin.” Most Jewish Israelis, including many Mizrahim today, use the terms Muslim, Arab, and Palestinian interchangeably, viewing them as hostile, “outsider” identities.

One of antisemitism’s greatest lies is not that Jews have multiple loyalties to multiple identities. Everyone has complex loyalties and identities. The lie is that we are uniquely untrustworthy in this regard. I believe that many Jews have internalized this aspect of antisemitism and have responded by expressing more exclusively singular loyalties and identities, often in the form of nationalism. In its Israeli Zionist form it is common for this to mean enmity and otherness vis a vis a crude conception of Arabness. This is why so many Mizrahim feel threatened or offended when confronted with the term “Arab Jews,” while simultaneously holding on to many aspects of our own Arab culture such as food, music, and language. It is also why many others insist on holding on to Arab identity in the face of the relentless propaganda that tells us it is impossible.

About the Author
Elan Cohen is a teacher of Hebrew and Arabic. He has a BA in the History of the Middle East from Wesleyan University and an MA in Arabic Studies from Middlebury Language Schools.
Related Topics
Related Posts
Comments