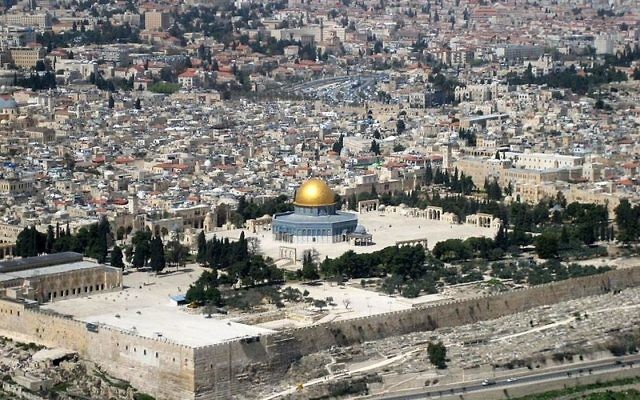 Over the weekend, four terrorists preparing a rocket attack against Israel were killed by a drone – probably Israeli – as they were getting ready to launch their lethal weapons. The group that took “credit” for preparing the terrorist attack is an Al-Qaeda affiliate calling itself “Ansar Beit al Maqdes”. Writing in response to my recent post on the origin of the name “Palestine”, my friend Ilan Pomeranc pointed out that this Jihadi group’s name witnesses to the Jewish status of Jerusalem.

“Ansar Beit al Maqdes” literally means the “Army of the Holy Temple”. Media outlets mistranslate the name as “Army for Jerusalem”, but Jerusalem does not appear in the name at all. In Arabic, “Jerusalem” is often called, in shorthand vernacular, “al-Quds”. What this term literally means is “the Holy”. “Quds” is merely an Arabization of the Hebrew “Kadosh” i.e., “Holy”. So if you put the two Arabic names for Jerusalem together what you get is “al-Quds al-Maqdes” which literally means “the place of the Holy Temple”.

Why do Arabs – in fact, all Islam – call Jerusalem by this name? Why not the “city of the Dome of the Rock”? Or the “Mount of Al-Aqsa”? After all, today the place is dominated by the Dome of the Rock and Al-Aqsa mosques. More than this, according to Islamic tradition, Muhammad took a night journey (Lailat al Mi’raj) to heaven from the rock where the dome now stands (sura 17 Al-Isra of the Quran). Why don’t Muslims refer to this night journey when speaking about Jerusalem? Why is Jerusalem not called “the place of the Holy journey”?

The answer is simple and historically accurate: everyone always knew that the reason the place was “holy” in the first place was because the Holy Temple of the God of Israel once stood there. It was built by King Solomon in the 10th century BCE and stood for some 500 years on Jerusalem’s Mount Zion. After it was destroyed by Babylonians in the 6th century BCE, it was quickly rebuilt by Ezra and Nehemiah and stood for another 500 years until the year 70 CE, when it was destroyed by the Romans. Meaning, everyone knows that for 1,000 years – a millennium! – the Jewish Temple stood on Jerusalem’s Mount Zion. You can’t just erase 1,000 years of history.

Jerusalem is central to the idea of the return of the Jewish people to its ancient homeland. The modern political movement called “Zionism” is an attempt to create a political program for a 2,000 year old yearning, namely, to return to the mountain of the Holy Temple. In the 4th century, the Roman Emperor Julian gave Jews permission to rebuild the Temple but he was cut down by an assassin before the project could be completed. To this day, on the 9th day of the Hebrew month of Av, Jews around the world fast in mourning for the destruction of the Temple. It is said that Napoleon (1769-1821) went by a Parisian synagogue once and heard wailing inside. When he asked what was going on, he was told that the congregation was crying over the destruction of the Temple. “When did this happen,” he asked? “2,000 years ago,” came the reply. His answer: “a people who mourn the destruction of a Temple that was destroyed so long ago, will see it built again”.

Recently, there’s been a renewed attempt to delegitimize Israel’s presence in Jerusalem. To this day, with a few exceptions, foreign embassies are all situated in Tel Aviv – not Jerusalem. Isn’t it ironic; Jerusalem is arguably the world’s oldest capital – always the capital of a Jewish state – and yet, its link to the Jewish people is still being disputed. Think about it, Jerusalem was the capital of a Jewish state 2,500 years before Europeans discovered America. And yet, the American embassy is in Tel Aviv, as if America’s link to Washington is somehow more legitimate than the Jewish people’s link to Jerusalem. Next door, Amman became the capital of the modern state of Jordan in 1947. It was given to the Hashemites, an Arab family from Saudi Arabia, by the British less than 70 years ago. And yet, no one disputes Jordanian sovereignty over Amman. All the world’s embassies are in Amman. But Jerusalem….that’s another matter. The challenge to Israeli sovereignty over Jerusalem is so monumentally illogical that it does not reflect normal historical processes. There must be something metaphysical to it.

And here is the ultimate irony: a terrorist group trying to wrest control of Jerusalem from Israeli hands unconsciously testifies to Jerusalem’s Jewish identity. It calls Jerusalem – “the place of the Holy Temple”.

About the Author
Simcha Jacobovici is a Canadian-Israeli filmmaker and journalist. He is a three-time Emmy winner for “Outstanding Investigative Journalism” and a New York Times best selling author. He’s also an adjunct professor in the Department of Religion at Huntington University, Ontario.
Related Topics
Related Posts
Comments