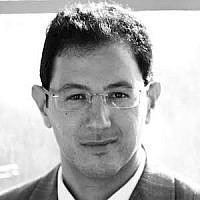 The Blogs
Binyamin Lachkar
Apply for a Blog
Advertisement
Please note that the posts on The Blogs are contributed by third parties. The opinions, facts and any media content in them are presented solely by the authors, and neither The Times of Israel nor its partners assume any responsibility for them. Please contact us in case of abuse. In case of abuse,
Report this post.

Two years ago, Naftali Bennet claimed in his first speech as a Knesset Member that 25% of Jewish Israeli couples preferred not to get married through the Rabbinate. This was a misquote from different media articles claiming that the number was 20%.

How did they reach this figure ? The Israeli Central Bureau of Statistics (ICBS) publishes information each year about the number of weddings performed abroad and then registered at the Israeli Ministry of the Interior and a press release spoke about 9,000 such weddings. Since there were some 36,000 Jewish weddings that went through the Rabbinate the same year relevant to the data (2010), it meant that out of 45,000 Jewish weddings, 9,000 were performed outside Israel, probably, according to the media, by people who wanted to protest the harsh and ultra-orthodox monopoly of the Rabbinate.

I knew such a couple. Three years ago I was invited to the Reform wedding of a colleague. She and her husband were perfectly 100% halakhic Jews recognized by the State and the Rabbinate. But while he had no problem going by the usual system, she insisted on a Reform wedding, and then a civil wedding abroad, to protest against the Rabbinate. I must admit this was the first, and since then, only time in my life I was invited to such a wedding or even knew about it. But apparently she represented a growing trend among young Israelis. Or did she ?

There are a few problems with these figures. Let’s start:

2. These were weddings of *Israelis*, not just Jewish Israelis.

3. According to the ICBS, most of these weddings were performed abroad because these people live abroad and they just reported it to the Israeli authorities while still in the foreign country or once they came back to Israel (that explains why they report weddings that occurred many years ago only now).

The latest data available about the weddings indeed performed abroad in 2010 tells us that there were 6,445 such weddings, when only 50% of the participants were Jewish Israelis, mostly marrying non-Israelis of unknown religion or non-halakhically Jewish Israelis. Very few were couples of two Israeli Jews – 1,275 out of 6,445 total couples.

The data over the years show no signs of an increasing trend, on the contrary, but of course it is incomplete, and the closer we are to our time, the more unreported the weddings. Nevertheless, these weddings are mostly of Israelis living abroad. People living in Israel tend to report them relatively fast, within two or three years, at least when the first baby is born. Overall, it seems the numbers are at best stagnant.

So we had in 2010 some 1,275 Jewish Israeli couples who chose to marry abroad. Does that mean they wanted to protest against the Rabbinate ? It appears that only 60% do marry in places like Cyprus or the Czech Republic, where most Israeli civil weddings are conducted. Many do take vows in the USA or even France, which leads us to suspect these are simply Israelis living abroad, or new immigrants going back home where all the family lives.

This means that among all the Israeli Jewish couples married in 2010 (and the same seems to be true for the following and preceding years), less than 3% did chose to get married abroad for no other reason than a refusal to go through the Rabbinate, maybe even less than 2%.

Of course, there are people who have some private weddings in Israel and no wedding abroad, or who do not report them to the State, or who do not get married at all and just live as a “known in public” couple. But we have a way to check on them — the number of babies born to non-married (according to the State) couples. It has risen from around 4% some 20 years ago, to 6% nowadays. Of course we have no way to know with the current statistics if these people do tie the knot after the birth.

So overall the numbers are low, and nothing indicates a rising trend of people rejecting the Rabbinate as much as it deserves it. They just do not care enough as I explained in my previous article.

I am not speaking here about the people who cannot get married through the Rabbinate, for example because their Jewishness is not recognized. I am speaking about Israeli Jews who despise so much the monopoly of the Rabbinate than they refuse to even get close to it.

I did not mean here to defend the Rabbinate and its way of conducting business. Only to show that despite what some media outlets and activists would like us to think, there is no change in the way Israelis conduct their weddings.

About the Author
Former Spokesman for MK Sharren Haskel, former Advisor to Mayor of Jerusalem, Binyamin is currently a consultant for public and private organisms. He made Aliyah from France in 1996.
Related Topics
Related Posts
Comments