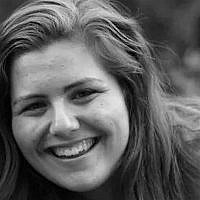 The Blogs
Risa Mond
Apply for a Blog
Advertisement
Please note that the posts on The Blogs are contributed by third parties. The opinions, facts and any media content in them are presented solely by the authors, and neither The Times of Israel nor its partners assume any responsibility for them. Please contact us in case of abuse. In case of abuse,
Report this post.

I am a writer; a friend, a sister, a daughter. I am an athlete, lover of life, a traveler. I listen to way too much music; I love to read, and I’m always asking questions. Sounds like a normal 18-year-old girl—right? Right! Well, that’s not all. Most importantly, I am a Jewish girl….a proud Jewish girl.

For the past few years, I had been on a journey to lead a more religious lifestyle. Four months ago, I decided to explore even more by moving to New York to attend Machon L’Yahadus, a seminary style program. I couldn’t wait for this new part of my life…but not everyone I knew was as excited.

I received a lot of responses, shock, happiness, tears of joy, but most of all, I was asked again and again: “Are you afraid of being oppressed?”At first, I was appalled by the question, which was followed by hurt and anger. It took me a moment to realize that people weren’t asking that question to be mean or rude—they were just curious. The unfortunate reality is that the media and secular news outlets do not necessarily portray the Jewish community—and women who live within the community—in a good way.

Here’s the lowdown on the Feminist perspective of the Orthodox Jewish community:

1)The first thing people tend to ask me is: “Why do men and women sit separately in shul?” “Are women so ‘low’ that they can’t participate as fully as a man?”

Here’s the short answer: No.

The long answer goes like this: About 3,000 years ago, praying looked a lot different than it does now. No one uttered prayers silently and no one shuckled (you know, that shaking back and forth thing you see everyone do in shul). And then came along a woman named Chana pleading for a child. She had so much intention that when she came to pray the words were not able to be said out loud, and she “shuckled”. Now, the High Priest, Eli, saw her doing this and was disgusted…he thought she was drunk! Respectfully, Chana related to him how bitter she was and how she was not drunk; rather, hopeless.

From this story, the sages teach us how to properly daven. What does this mean? All the guidelines men follow are to emanate a woman! The framework of davening is centered around emotions, asking for help, and digging deeper. So why did Chana look like a drunk to Eli? Because she poured her emotions out, something men naturally have a hard time doing. For men this could be a hard thing with woman around…hence the separation. And ask yourself honestly, would you be able to focus wholeheartedly on your relationship with Hashem with the opposite gender sitting right next to you? Women automatically feel and act differently around men, so the separation helps both men and women glean the truth.

2) Let’s talk about the ‘oppression’ thing. A prime aspect in Judaism is that the woman has the most influence on her home. She is the backbone, the foundation, the influencer. If she stresses manners and education, so will her family. If she G-d forbid prioritizes the exact opposite, it is apparent.

In Chabad specifically, the Rebbe, Menachem Mendel Schneersohn, helped institute The Lubavitch Women’s Organization. The Rebbe hoped for women to recognize how imperative of a role they play in the Jewish community. One day, a couple went to the Rebbe to tell him the exciting news that they are opening up a pre-school. The Rebbe handed them a dollar and said “Put a tzedakah box in your new school, and put this dollar in for charity.” So, the husband took the dollar from the Rebbe. He then turned to the woman and says, “You probably direct the pre-school, even more so than him.” He proceeded to give her an extra dollar. Rather than having women follow their husbands, the Rebbe helped them acknowledge their amazing feminine qualities and how they can—and should!—be embraced.

3) You know how the saying goes: men are from Mars, women are from Venus. The differences between a man and a woman are big, obviously. But it is these differences that affect how a person thinks, speaks, feels, and acts. What some people don’t realize is everyone contains both masculine and feminine qualities. But at the end of the day, you are either a man or a woman; but, these variances are not a negative. How beautiful is it that every person in this world has their other half to compliment them and bring out much more of them. Judaism emphasizes how the equal balance between a man and a woman is the basis of everything.

So, do we feel inferior as women in this community, you may ask? No! On the contrary, I have never felt more strong, dedicated, and empowered as I have as part of this community. When I gaze at the men praying from across the partition, I think of Chana’s determination. Every Jewish home I walk into exudes the glory and power of the woman of the house. When I light my shabbos candles and say a blessing every Friday night, I am overcome with joy to know that this mitzvah is for me, and me alone, a powerful, strong Jewish woman.

About the Author
Risa Mond, a 19-year-old adventurous living out her dreams in New York. As an employee of CTeen, an international Jewish youth organization, Risa believes that youth posses the power to change the world, and strives to live by example.
Comments