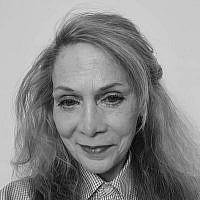 The Blogs
Ginette Weiner
Apply for a Blog
Advertisement
Please note that the posts on The Blogs are contributed by third parties. The opinions, facts and any media content in them are presented solely by the authors, and neither The Times of Israel nor its partners assume any responsibility for them. Please contact us in case of abuse. In case of abuse,
Report this post.

Is it possible to fool all of the people, all of the time?  Yes, it is.  Just mix together generous helpings of these ingredients, with guaranteed results.

Stir ingredients. Be relentless. Then sit back and savor the results. You will know your cake is done when Jews in America need to hide any signs of being a Jew when they leave their homes, when being labeled a white, colonialist oppressor, an apartheid subhuman is the new norm.  Your decades of hard work is not without its rewards. You graduated from just peddling lies to assaulting Jews, with impunity, on our streets, en route to synagogues, in restaurants, at rallies. And don’t forget to count this astonishing windfall—the totality of the collective failure of American Jewish organizations to get even basic facts about Israel to themselves, the public at large, to mainstream media, on campuses or to our elected leaders.  If you are a Jew, a Zionist, an Israel supporter, you are already on the menu for ostracization and elimination.

“The Boston area “Mapping Project”  is put together by the Boycott, intersectional, anti-Israel mob.  The map includes Jewish and Israeli institutions, such as the Synagogue Council of Mass., Harvard Center for Jewish Studies, two Jewish newspapers, and more.  It is tapping into millennia-old antisemitic tropes about nefarious Jewish wealth, control, conspiracy…Mapping Project’s “underlying messages are clear: Jews are responsible for the ills of our community and if you maintain your relationship with Jewish organizations, you will share that responsibility.”https://thejewishvoice.com/2022/06/invitation-to-violence-anti-israel-groups-map-puts-target-on-boston-jews/

Imagine if someone put out a target map of Blacks or Hispanics or Muslims.  Mainstream media would be up in arms but when it’s Jewish institutions…we hear the usual deafening silence.

“One revelation made obvious with the publication of this map is that the enemies of Zionism and Israel, who usually mask their anti-Semitism by contending that criticism of the Jewish state is never anti-Semitic, now apparently feel comfortable enough to engage in public, blatant attacks on Jews, Judaism, and Jewish communal and civil rights organizations as part of their contention that it is Jews, not just the Jewish state, who are guiding and maintaining this oppression.” https://thejewishvoice.com/2022/06/the-odious-mapping-project/

Common knowledge, bears repeating: Before and since Israel became a legal nation, they were repeatedly attacked by Arabs who eventually realized their only hope of eliminating Israel was to begin waging their biased war of words. They are winning. Several authors recently wrote about Nazi and Russian propaganda techniques which were adopted by the “Palestinian” Arabs, most notably Arafat and Abbas, who learned their goose step lessons well.  Ziva Dahl’s, “Russia Perfected Disinformation Decades Ago — Against Israel” is a definitive milestone, a must read.

Melanie Phillips, “For the Jews, History Repeats Itself in Ukraine”, says it as well:

“Now where have we heard this before, where the victims of an attempt to erase them from the map are themselves accused falsely of genocide?…This is precisely what the “Palestinians” have done to Israel. For decades, they have promoted the big lie that they are the indigenous people of the land, that the Jews were the colonizers who deprived them of their rights and that the Israelis continue to oppress and practice “genocide” against them. Every part of that is not only untrue but it is the “Palestinians” who seek aggressive conquest and the Israelis who are victims of their terror.

This big lie about Israel was created in the 1960s when the “Palestinian” terrorist leader Yasser Arafat made common cause with the Soviet Union to rewrite history, demonize the Jewish state and subvert the west by twisting its collective mind and destroying its moral compass.  This was laid out by General Ion Pacepa, the former head of Romania’s foreign intelligence service, who played a significant role in Soviet bloc operations directed against Israel and the US and who defected to the west in 1978. According to Pacepa, the chairman of the KGB, Yuri Andropov, told him, “We needed to instill a Nazi-style hatred for the Jews throughout the Islamic world, and to turn this weapon of the emotions into a terrorist bloodbath against Israel and its main supporter, the United States.”  This mind-bending has resulted in Israel’s demonization in the West.” https://www.algemeiner.com/2022/03/04/for-the-jews-history-repeats-itself-in-ukraine/

“Palestinian Authority President Mahmoud Abbas declared his support for Putin’s stance on Ukraine during a phone call between the two men on Monday. Abbas has a close personal relationship with Russia that mirrors the historically warm ties between Moscow and the PLO. In the early 1980s, Abbas studied in the Soviet Union, where he was awarded a doctorate for a dissertation falsely alleging that the Zionist movement was just as culpable as the Nazi regime for the Holocaust during World War II.”

Still wonder if you are on the menu?

“How AP Teaches Its Journalists to Whitewash the Bloody Truth About Hamas.”

“The Associated Press’ guidance for journalists on how to reference Hamas is based on a grossly inaccurate description of the organization’s mission, vision, and bloody track record.

As a result, AP journalists are being taught to whitewash the actions of a terror group that seeks to wipe Israel off the face of the Earth.

Since 2015, in print, I have relentlessly warned about this storm coming at us, asking for calls to action. I am still waiting. I am waiting for American Jewish “leaders” to put their differences aside, collaborate with Israel, (and worldwide Jewry), and fund our own giant Public Relations Agency to get basic, accurate truths out about Israel and refute the Big Lies.

I am still waiting for American Jews to unite, proactively demand Our Jewish Civil Rights, demand, not beg, the IHRA be accepted by all who walk this earth.  I have been waiting for our community to be as relentlessly aggressive as our haters are.  I am waiting for full page ads, nationwide billboards, exposing the genocidal, eliminate Israel, Arab Jew hate speech, in their words, not yours, not mine, for mainstream media, for all to hear and read, documented by Palestinian Media Watch.  In whose world is exposing Jew hate speech bigoted? Tell that to the German Jews of the 1930’s while Hitler drummed it up.

I hear only the usual reactive vs. proactive, defensive, apologetic, bent over posturing from American Jewish “leaders”, almost always only in response to the latest attack on us. And this, only some 80 years after Jewish children were thrown alive into the crematoriums, as the Allies descended upon the death camps.

If our collective wisdom is failing us, if our collective chutzpah is gone, and it is, perhaps it’s time to take some advice from an unlikely source, Saudi Arabia’s Crown Prince Mohammed Bin Salman, “In the last several decades the Palestinian leadership has missed one opportunity after the other and rejected all the peace proposals it was given,” the crown prince said according to a wire sent by the Israeli consulate in New York…It is about time the Palestinians take the proposals and agree to come to the negotiations table or shut up and stop complaining.”

I watch American Jews retreating to their respective bubbles.  They shrug with resignation at the latest instance of Jew and Israel biased hate, almost accepting of it as part of the new norm, hoping it will go away. It is not going away. It is worse daily.  If we can’t even unite and become loudly proactive when there is a literal target on our backs, then it is time to build bulletproof bubbles for your children. They will need them.

About the Author
Ginette Weiner, is a published commentator in Jewish and mainstream newspapers, and a lecturer on strategies for combating media bias, antisemitism, and BDS. She holds an MSW and a Certification in "Understanding Media Bias & Israel Advocacy: Defending Israel from Media Bias", 23rd Mission to Israel, Honest Reporting: June, 2015. She resides in Arizona.
Related Topics
Related Posts