A satellite picture of Agdam's Qizil Kengerli village shows that there is an illegal settlement set up by Armenia which they have named Nor Maraga. Agdam is one of the seven occupied districts where Armenians did not live and which was not part of Mountainous Karabakh. Photo: Google Earth

With the recent border clash between Armenia and Azerbaijan in the Tovuz section of the state border, two things became clear: the OSCE Minsk Group format to find a peaceful solution to the Karabakh conflict is dead, and the exact reasons why the “peace” negotiations are stuck.

The creation of illegal settlements and the settlement of ethnic Armenians, who are citizens of other states such as Lebanon and Syria, in both Mountainous Karabakh and the surrounding Azerbaijani districts are against international law, particularly the Geneva Convention. Settlements have been created in Zangilan, Qubadli, Lachin, Kelbajar, five villages in Agdam and at least one village in Fizuli. The Armenians are reviving irredentist nationalistic history to change the names of the districts and brand the territories part of “Artsakh”. Armenia’s leaders have utilised the Beirut blast to bring more Armenians to Karabakh. Shelli is another occupied village in Agdam where new buildings can be seen in the satellite picture. Five settlements created in occupied Agdam villages (Gulabli, Shelli, Qizil Kengerli, Boyehmedli and Papravand) connect Askeran in Mountainous Karabakh to Martakert, also in Mountainous Karabakh, so it is unlikely that Armenia will agree to return these villages if a peace deal is reached. Photo: Google Earth

One has only to look at the creation of illegal settlements to grasp the failure of the peace negotiations to achieve genuine peace between the conflicting sides. Describing the relocation of foreign citizens and creation of settlements in Zangilan, Qubadli, Lachin and Kelbajar as a strategic goal is an attempt to annex these districts. By building settlements in Zangilan and Qubadli and relocating Syrian Armenians into the area they are trying to extend Armenia’s southern border with Iran and to widen the gap between Azerbaijan and its exclave Nakhchivan. For example, the village of Khanliq in occupied Qubadli district has been turned into a settlement of Syrian Armenians, following the start of the civil war in Syria, and renamed Ishkhanadzor. The village of Xocahan in the same district has suffered a similar fate. 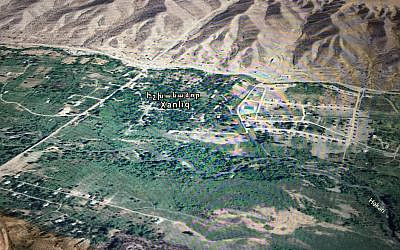 Xanlıq (Khanlig) is a village in the occupied Qubadli district. The Armenian Tufenkian Foundation is working alongside the Armenian government to create this settlement which they have named Ishkanadzor and is mainly populated by Armenian settlers from Syria and Lebanon./ Photo: Google Earth 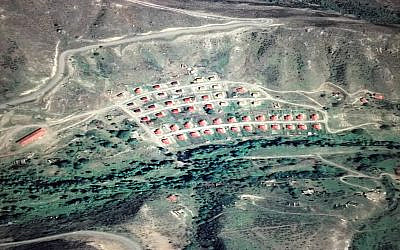 Zabux (Zabukh) is an Azerbaijani village in the occupied Lachin district. There are clearly new buildings here too.

The Tufenkian Foundation based in the United States is actively involved in financing and building these illegal settlements. The same can be said about Cahangirbeyli village in the occupied Zangilan district, close to the Iranian border. Here the Tufenkian Foundation and the Armenian government have created a settlement for Syrian Armenians and named it Van. There are dozens of settlements in Zangilan and Qubadli, including district centres. As well as giving Armenia a wider border with Iran, and extending the gap between Azerbaijan and Nakhchivan, these districts have ideal land for farming with several rivers flowing through them.

Interestingly enough, by refusing to describe officially the exact borders of so-called “Artsakh”, Armenia’s leaders are playing with words in these negotiations. When confronted with the question of the occupation of the seven Azerbaijani districts adjacent to Mountainous Karabakh, they used to justify it as necessary to ensure Mountainous Karabakh’s security from Azerbaijan. But the question is, if it is all about ensuring “security”, why on earth are Armenia and its diaspora actively creating settlements in those districts and relocating settlers from Lebanon and Syria? The strategic goal is clear and it is the annexation of those territories. The publication of artificial maps showing the seven occupied districts as part of Armenia and “Artsakh” proves the point. Yerevan is prolonging the status quo and disrupting the negotiating process as part of a policy of strategic ambiguity, which they think will eventually finalise the annexation process.

Google Earth clearly shows the extent of settlement building in Azerbaijan’s territories and exposes the lies that have been propagated for decades by Armenia’s nationalist leaders and diaspora. These acts must be condemned and pressure must be put on Armenia to stop this dangerous process, as it is leading to a new war in the region. The duplicity and unwillingness of human rights organisations to recognise what Armenia is doing, while criticising Israel for building settlements, shows how double standards are applied when it comes to Armenia.

About the Author
A native of Azerbaijan, I write extensively on political developments in the Caucasus, Iran and the Middle East. City, University of London graduate.
Comments