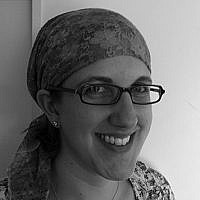 The Blogs
Gila Rose
Apply for a Blog
Advertisement
Please note that the posts on The Blogs are contributed by third parties. The opinions, facts and any media content in them are presented solely by the authors, and neither The Times of Israel nor its partners assume any responsibility for them. Please contact us in case of abuse. In case of abuse,
Report this post.

Recently, there was a beautiful display of unity in New York. Two warring Satmar groups came together to protest the Israeli government’s latest efforts to draft Haredim into the military. The enemy of my enemy, after all … So there were lovely placards stating “Orthodox Jews will proudly go to jail rather than join the Zionist army!” and statements about how ONLY Torah learning has kept our people alive.

First, I don’t understand how the ultra-Orthodox, who claim to learn God’s word all day, can blithely ignore the massive chunks of the Torah that don’t fit in with their “All We Need Is Torah” theme. You know, the parts that talk about Joshua conquering the land of Israel, about King David charging out to war, or about the hundreds of great sages and rabbis who also held down ordinary, everyday jobs (employment going hand-in-hand with army service in this country). They revere the David who wrote Psalms, but are more than willing to ignore the David who went out into battle. They like the part about the Hasmoneans sacrificing everything to learn Torah and perform brit milah and ignore the part where the Hasmoneans had to actually grab some spears and fight the Greeks. OK. Fine. So you believe that Torah study alone is what keeps us going, and you ignore the parts where we have to get our hands dirty.

But I am not arguing with the importance of Torah studying. I agree that Torah learning is what makes Jews, Jews. Without Torah, and people studying it, Judaism is just matzah balls and latkes (not that there’s anything wrong with matzah balls and latkes, of course). I am not arguing the necessity of studying Torah. “V’hagita bo yomam v’laylah (immerse yourself in Torah study day and night.)” That’s good stuff, right there.

What’s bothering me today, though, is how the Haredim have decided that they, and they alone, have the monopoly over Torah study. And we somehow have gone along with it! When did we all agree that only the ultra-Orthodox know how to learn Torah? Who decided that the Haredim must sit and learn Torah, and everyone else can go risk their lives in the army? I agree that there should be an army exemption for scholars. True scholars, who excel at learning and can commit to a lifetime of study. But who says Torah scholars have to be “Haredim?” Shouldn’t a “scholar exemption” apply across the board? A national religious, or yes, even secular Jew who shows true prowess at learning should be able to devote him (or her) self to the rigor of full-time study. And aside from those exceptions, everyone else should enlist or perform national service.

To the ultra-Orthodox, I am curious: Why is your Torah learning worth more than mine? And why is my son’s life, conversely, worth less than yours? Your way of life is not more or less “right” than mine. So why have we drawn this arbitrary line, deciding who should learn and who must serve?

My children are still young. Army service seems a far-off thing, as far off as a Shabbat nap or not having to hire a babysitter. But it’s coming. Every day, like the song says, it’s-a gettin’ closer. I look at them and know, improbably as it seems now, that one day they will leave home and proudly serve their country. And then I think about the devastating, unbearable sadness of Yom Hazikaron (Memorial Day) and then my mind refuses to go any further. So part of my riled-up-ness is that it feels very personal. I am hurt that my fellow Jews are totally OK with sending other people’s children—my children—off to fight and defend them. I am hurt that to them, my Torah study and my life are worth less.

Learning Torah makes us “Jewish.” Serving in the army makes us safe and able to continue learning all that Torah. And all types of Jews should proudly engage in both.

About the Author
Gila is a mother of 3 living in Modi'in and chief blogger for Jewish Values Online. Sometimes earnest, sometimes snarky, always honest.
Comments