To honor the growing relationship between Israel and Morocco in the spirit of the Abraham Accords, I launched Rembrandt-inspired Cyberangels of Peace on virtual flights from the Israel Museum in Jerusalem to the Marrakech Museum for Photography and Visual Art and the Mohammed VI Museum for Modern and Contemporary Art in Rabat. 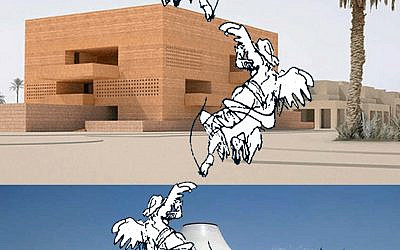 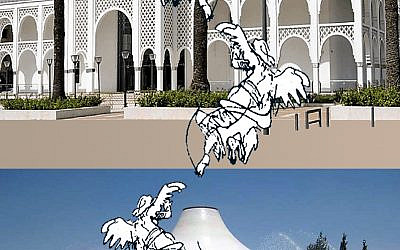 During Lapid’s meeting with Bourita, he relayed an invitation from Israel’s President Isaac Herzog to Morocco’s King Muhammad VI.

“Allow me to express my sincere appreciation for Your Majesty’s decision to establish full diplomatic, peaceful and friendly relations between the Kingdom of Morocco and the State of Israel. We are committed to deepening the strength of our relations and hope that they further expand and flourish over time.”

Herzog expressed admiration for the king’s “ground-breaking contribution to Arab-Israeli reconciliation in many countries across the region.”

Bourita said that Lapid’s visit “reflects the commitment of our two countries to strengthening our bilateral relations and give them concrete impetus through the establishment of effective cooperation mechanisms.” He plans to be on the first direct Royal Morocco flight to Israel to dedicate the Moroccan Embassy there.

Yair Lapid proposed cooperation between countries surrounding the Mediterranean Rim extending to the Gulf. He said, “Think of it as a circle of Israel and Morocco and Egypt and Jordan and in some ways you can say Cyprus and Greece, Bahrain, the United Arab Emirates. All of the countries that are religiously moderate with truly infinite economic potential.”

In response to Lapid’s visit to Morocco, Nimrod Goren penned an article in the Jerusalem Post “Israel should introduce a regional agenda for Israel-Morocco ties” in which he proposes ways for making Israel a key player in a Mediterranean Rim dynamic between the 21 nations bordering the Sea. He writes:

“Israel lies at the crossroad of the Middle East, Europe and the Mediterranean. These regions are strongly linked, and each provides Israel with options for integration and belonging”

As president of Mitvim – The Israel Institute for Regional Foreign Policy, Dr. Goren emphasizes the significance of adding a regional framing to bilateral ties that would contribute to upgrading Israel-Morocco relations and yield substantive benefits for both Israeli and Moroccan foreign policy.

As an experimental artist who has worked on a global canvas for decades, I am conceptualizing an artwork that radiates from Israel across Europe on the northern tier of the Med Rim from Spain and across North Africa on the southern tier to Morocco. It will include the 21 Mediterranean Rim countries from Spain, France, Monaco, Malta, Italy, Slovenia, Croatia, Bosnia-Herzegovina, Montenegro, Albania, Greece, Turkey, Syria, Cyprus, Lebanon, Israel, Egypt, Libya, Tunisia, Algeria, to Morocco.

Cyberangels carrying messages of peace, friendship, and brotherhood will be launched from the Israel Museum through art museums in all the other 20 countries.

I had created a related artwork in 2008 that I called MERIWIP: MEditerranean RIm WIkiart Project that can be seen at Wikiartists. MERIWIP invited people living in the countries that surround the Mediterranean Sea to be wikiartists by collaborating in creating a web-enabled peer-produced artwork by exchanging wedding photographs and flowers between nations. Participants sent photos of flowers grown in their country to a couple from another Med Rim country though the Wikiartists blog.

This artwork evolved from my 2004 exhibition “Cyberangels: Aesthetic Peace Plan for the Middle East” at the Jewish Museum in Prague. It proposes peace between Israel and the Arab countries based upon Islamic values expressed through counter-patterns in Moroccan kilim rugs. My exhibition displayed actual rugs woven with traditional Islamic patterns beside digital enlargements of their counter-patterns printed out on canvas. The exhibition presented an interplay between Arab Islamic art and the European Christian art of Rembrandt-inspired cyberangels mediated by an Israeli Jewish vison of aesthetic peace. See Aesthetic Peace. 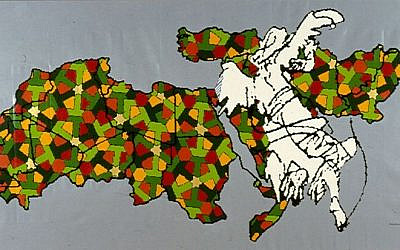 FM Yair Lapid discussed how Israel and Morocco are reviving a centuries-old friendship between the Jewish people and the people of Morocco by establishing diplomatic relations.

Jews have a long history of living in Morocco. After the establishment of the State of Israel, most of Morocco’s Jewish population moved to Israel where they contribute to all walks of life. Today, about a million Israelis have family origins in Morocco.

In 1977, my wife Miriam and I moved from New York where I was professor at Columbia University to Yeroham, a town isolated in the Negev desert, where I founded a college. Most of its population had moved there from Morocco. When our new neighbors learned that we were Americans, they said to us in Hebrew, “Americayim Moroccayim, almost the same thing.”

Our family became one of the families with origins in Morocco. Our New York born daughter Iyrit is married to Dr. Yehiel Lasry who was born in Morocco. His family moved to Ashdod when he was six years old when it was a small town on the sea. He is now the mayor of Ashdod that has grown under his creative leadership into one of Israel’s largest cities and its major port. He studied medicine at Ben-Gurion University, was Surgeon-General of Israel’s navy, specialist in internal medicine at Kaplan Hospital in Rehovot, member of Knesset (Israel’s parliament), and a founder of the Andalusian Orchestra that creates a cultural bridge between Israel and Arab countries. Four of our grandchildren are half Moroccan.

My wife and I live in Ra’anana, the same city north of Tel Aviv where Israel’s Prime Minister Naftali Bennett lives with his wife and children. Before partaking of the Sabbath eve meal, our Jewish families sing, “May your coming be for peace, Angels of Peace, angels of the Exalted One.” The song begins with the words shalom aleikhem (may peace be with you). Shalom aleikhem is the traditional Hebrew greeting when people meet. It is akin to the Arabic greeting salam aleikum.

May the Hebrew Malakh Shalom and the Arabic Malak Salam be recognized as one and the same Angel of Peace.