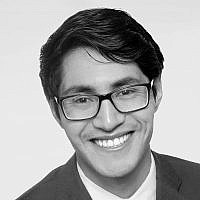 The Blogs
Manilan Houle
Let's change the world, together.
Apply for a Blog
Please note that the posts on The Blogs are contributed by third parties. The opinions, facts and any media content in them are presented solely by the authors, and neither The Times of Israel nor its partners assume any responsibility for them. Please contact us in case of abuse. In case of abuse,
Report this post.

Recent preliminary data by the ADL shows that reported antisemitic incidents in America have increased by 75% during this last escalation between Israel and Hamas.  No, these are not simply protests against a foreign government’s policies. These incidents were attacks against American Jews simply because they were Jewish and are the latest manifestation of the oldest hate in history, antisemitism. As somebody who’s worked in progressive campaigns and organizing for the better part of a decade now I know that we must name it before we can confront it.

For the last two weeks I’ve seen too many of my long-time personal friends remain silent as we witnessed libels and misinformation spread against Jews, not only in Israel but around the world.  The deeply biased Instagram and TikTok campaigns that by now we have all become well aware of. And for the last two weeks, I have heard far too many in the American Jewish community ask, “where are our allies?”

And my heart broke as each time I would scream into the void, “I see you. I hear you. I’m sorry so many of my friends have so much work to do.”  But that’s the truth, for folks like me on the political left, we have work to do. Antisemitism is not just something found on the right.

If you were to ask me four years ago to name an act of antisemitism all I would be able to say is that the white supremacists marching in Charlottesville chanting, “Jews will not replace us” were antisemitic.  I could do it because I couldn’t see myself in them. And surely I was not antisemitic, I surely never pedaled in tropes that put a community I barely knew in danger. The truth was, I didn’t know what antisemitism was and how deeply pervasive it is in all corners of our society.

In the fall of 2016, as progressives reeled in the wake of the election of Donald Trump, my friend Carly reached out to ask my thoughts on what was going on with the Women’s March.  She expressed how certain members of the leadership team made her community, the Jewish community, feel uneasy and even unwelcome to be part of one of the greatest protests in history because of antisemitism. And I had to ask, “what have they done that’s antisemitic?”

I am forever grateful for her response because now I know how much unlearning and relearning I have to do around the most persistent and consistent hatred in the world, antisemitism.  Until then I had it let run wild among my circles while I turned a blind eye, never noticing it, never calling it out, because I simply didn’t see it.

On October 27, 2018, the unthinkable happened, a gunman walked into the Tree of Life Synagogue and murdered eleven Jews.  As I heard the breaking news my heart sank into my chest and all I could think to do was call Carly, who for the last year had told me that rising antisemitism would end with “blood in the streets”.  Well, now that had happened and I felt responsible.  That night on the phone with Carly after over an hour of sharing tears I promised that I would continue showing up, when nobody else would, even if I didn’t know how.

In the aftermath of the Tree of Life shooting, I found myself with so many questions. How do I name antisemitism? What do I do if I’m unsure something is antisemitic? Why does it seem not a single other one of my friends is willing to dive deeper on this with me? Is it even my place to try and address this if I have so much to learn? But all of these questions were met with open and honest answers by folks who have since become very dear friends. Our deep relationship cultivated in questioning and in many ways healing.

In May of 2019, I traveled to New York City for my very first time. The months leading up to my trip had seen a spree of violent attacks against the Chasidic community.  A community I knew nothing about, so I reached out to a rabbi on Twitter, Rabbi Mordechai Lightstone and asked whether, if I could make it to New York, he could show me his community and share just a piece of their history.

I was thrilled when he agreed. My new friend Barbara, reached out prior to the trip offering me a place to stay with her family in Flatbush and a seat at her Shabbat table. I would spend 11 days in New York City. Touring Crown Heights, getting a behind-the-scenes tour of 770, meeting with dozens of Jews (secular, reform, orthodox, survivors, and descendants) hearing first hand the story of the vibrant Jewish community that makes up New York.  Every person I met I’d ask even more questions and I was met with smiles and brutally honest answers. But, I was also asked questions back. The more I asked to hear the stories of their families the more they wanted to hear about my family.

A couple years have passed since my first trip to New York but those relationships and stories have not simply blown like sand in the wind, they have been etched into my memory. The laughs. The tears. And yes, even the tastes of the food. So when I am asked why I see antisemitism when it seems others do not, my response is, because I’ve been shown by people who will show up for me. Relationships matter.

Today if you were to ask almost anybody on the street if they knew that there had been a long trend of rising antisemitism in America I would bet my bottom dollar that their answer would be something along the lines of “there’s always been a little bit of that” and that they wouldn’t know that for the last 5 years the Jewish community has seen a consistent and steady rise in hatred and bigotry online and in the streets. Let alone be able to speak on the recent spike of incidents we’ve witnessed the last two weeks. I say that because just a couple years ago I was one of them.

We have a long way to go in rooting out antisemitism, wherever it persists. But we can and should call it out whenever we see it. We also must cultivate spaces for people like me to learn, to ask questions, to grapple with the systems that have let anti-Jew hate go unchecked within our own social and political circles for too long.  Maybe then will more folks be able to name antisemitism and rise against it whenever and wherever it rears its ugly head.

About the Author
Manilan Houle is an award-winning activist and organizer. As a tribal citizen of Fond du Lac Band of Lake Superior Chippewa, he has spent the last decade organizing and advocating on LGBTQ rights, anti-poverty policy, youth in foster care and foster policy, and Indigenous rights. Manilan, is part of the 2020 Bronfman Convener's Program with the Israel Policy Forum and works as a political consultant for progressive organizations and campaigns.
Related Topics
Related Posts
Comments