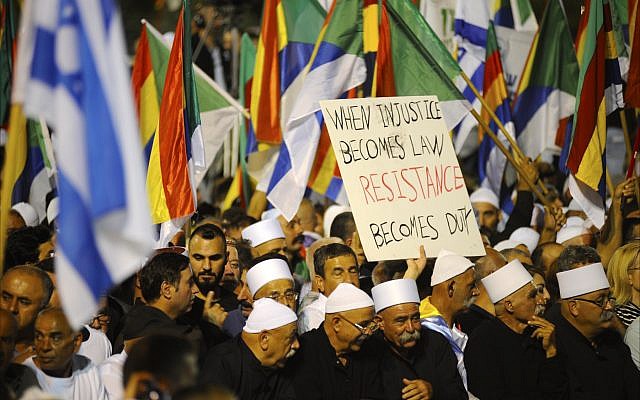 Three days after as many as 90,000 people waving Druze and Israeli flags gathered at Tel Aviv’s Rabin Square to demand “equality” — and four days before a similar but much smaller protest at which Palestinian flags were also waved — panelists on a transatlantic conference call struggled to make sense of Israel’s latest political firestorm.

The Aug. 7 call-in was hosted by the Washington-based Wilson Center, a nonpartisan think tank. It comes amid broiling controversy over the new nation-state law, which the Knesset passed last month, and which for the first time defines Israel as “the national home of the Jewish people.”

The law also states that “the right to exercise national self-determination in the State of Israel is unique to the Jewish people” while downgrading Arabic as an official language on par with Hebrew to a language with “special” status.

“This law carries momentous consequences for governance, politics and national identity in Israel,” said the Wilson Center’s director, president and CEO, Jane Harman, a former U.S. congresswoman who has visited the Middle East no less than 25 times. “It raises serious concerns for minority groups as to their place and role in the so-called Jewish state.” 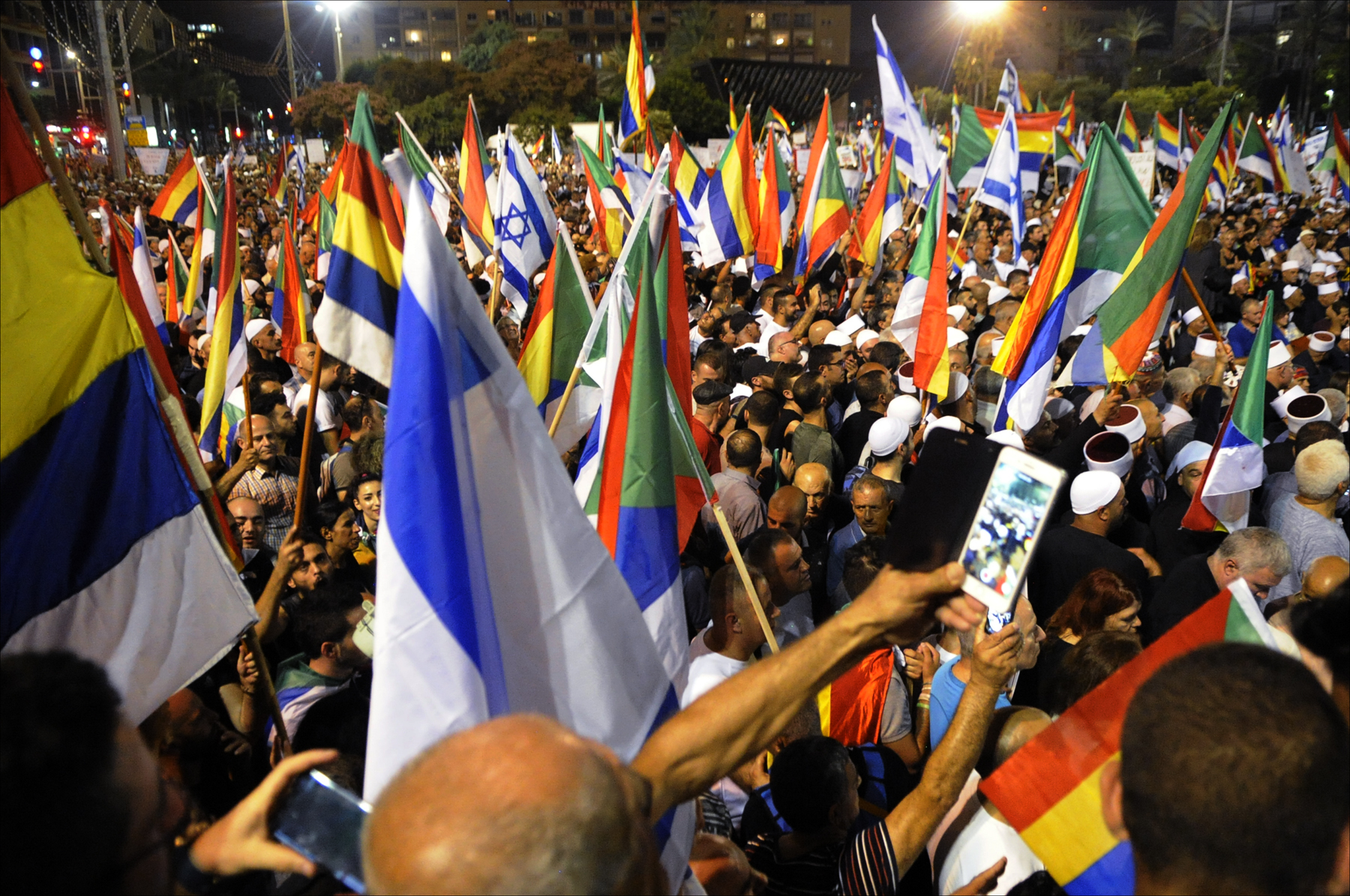 Shibley Telhami, a political science professor at the University of Maryland, cited a recent Pew survey indicating that 79% of all Jews in Israel — including 69% of secular Jews — believe Jews deserve preferential treatment in Israel.

“Because Druze serve in the military — unlike haredi [ultra-Orthodox] Jews who don’t — this law says the haredim are more Israeli than the Druze. It legitimizes a certain discourse,” warned Telhami. “Even though it may not have direct legal consequences for today, it opens up the possibility for claims down the road, such as encouraging Jewish settlements. A future government or Supreme Court might refer to this law to legitimize actions that are further discriminatory. It’s very troubling.” 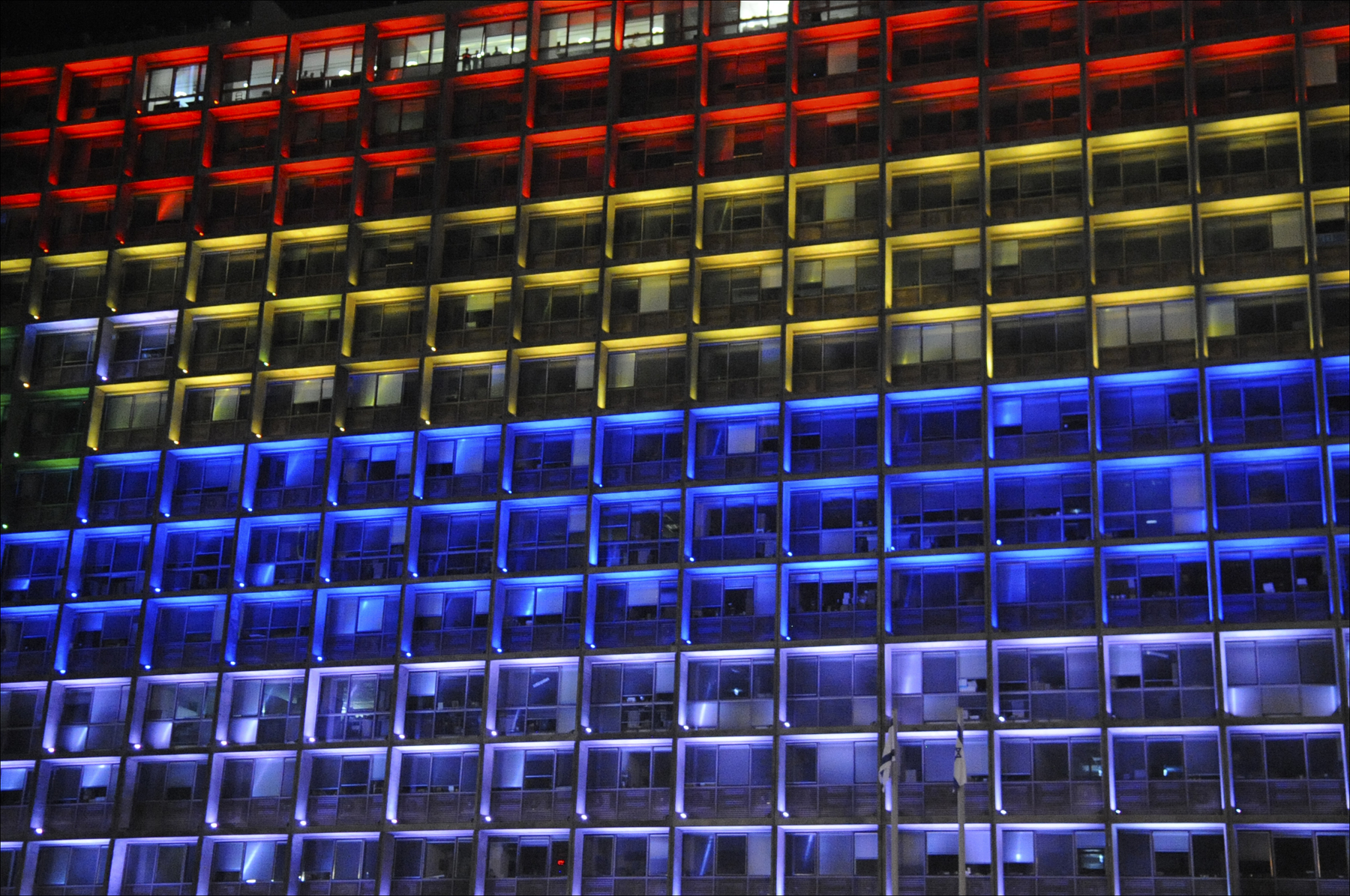 Tel Aviv’s City Hall is lit up with the colors of the Druze flag as up to 90,000 people rally Aug. 4 against Israel’s new nation-state law. (Larry Luxner)

Yet Israel is hardly unique when it comes to grappling with the challenges of minorities, said the panel’s moderator, Aaron David Miller.

“In the United States of 1846 — 70 years after our independence — you would have found a similar situation,” said Miller, who advised six U.S. secretaries of state and is now Middle East program director at the Wilson Center. “America was a very different country in the 19th century, and its public square excluded, in a far more cruel and egregious way, so many more groups than we find in Israel. Blacks were slaves, women were unemancipated, and Native Americans were repressed and hounded; so were white males who did not own property.”

Noted historian Martin Kramer said people should remember that even Israel’s own Declaration of Independence was divisive when it was signed on May 14, 1948.

“The Jewish state arose not to privilege the Jews, but to protect them. It was to be a safe haven for the Jewish people, because elsewhere they proved to be uniquely vulnerable,” said Kramer, the founding president of Jerusalem’s Shalem College. “People forget history: Israel — by conception and design — is a nation-state and of the Jewish people.” 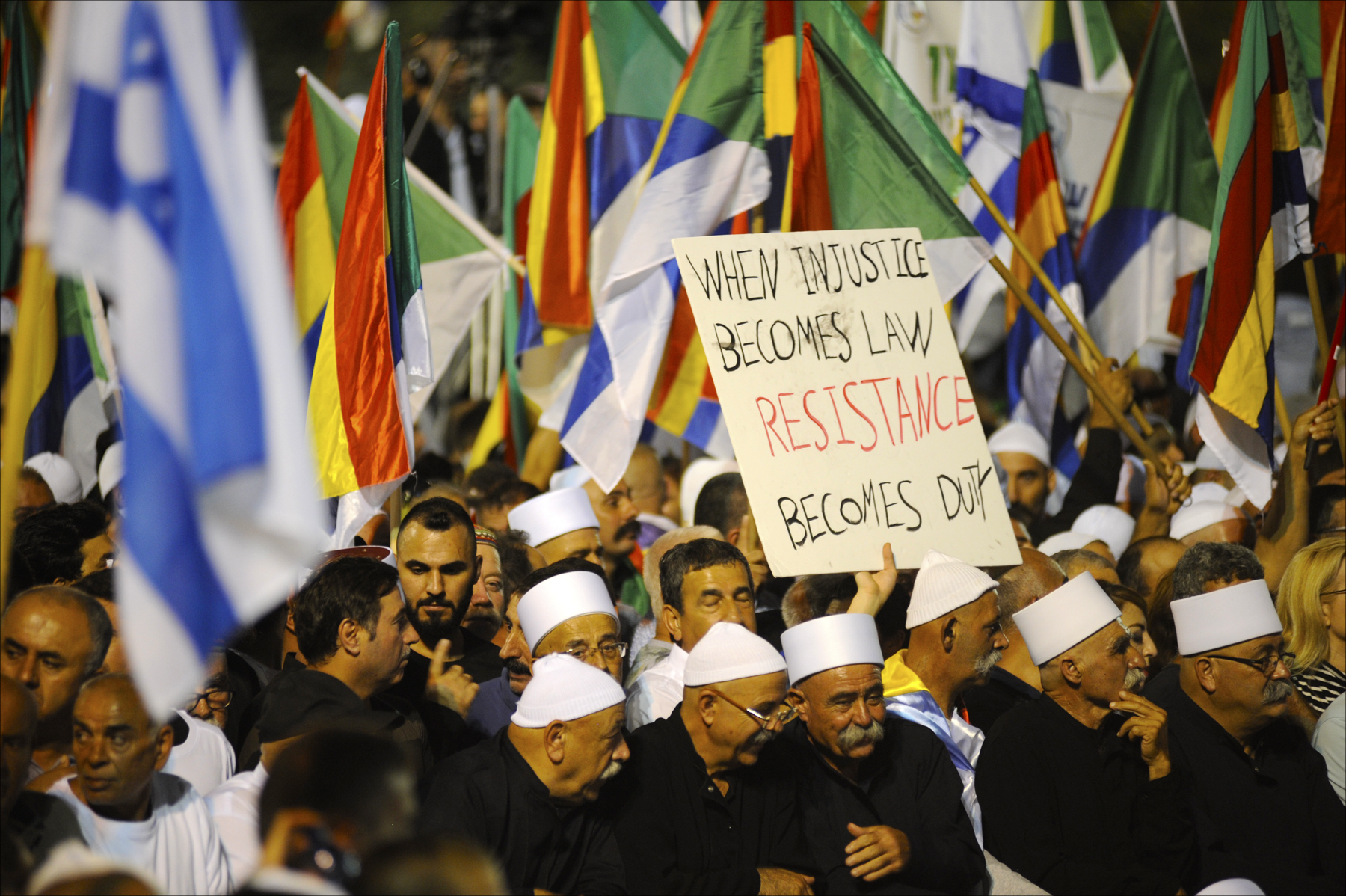 Kramer added: “This law doesn’t enshrine individual rights, but it wouldn’t make a difference. It has been said that this law is divisive, but even the declaration of independence was divisive. This law changes nothing. Every article in it fortifies the status quo.”

If nothing changes, then why pass it in the first place?

Anshel Pfeffer, veteran Jerusalem correspondent for Haaretz, says it’s all a “cynical ploy” by Prime Minister Benjamin Netanyahu to shore up support ahead of next year’s elections.

“This law is not new. It was originally tabled over a decade ago and has been in committee for the entire time Netanyahu has been in power,” he said. “Why double down on the law now, knowingly antagonizing the Druze? The answer, of course, is politics.” 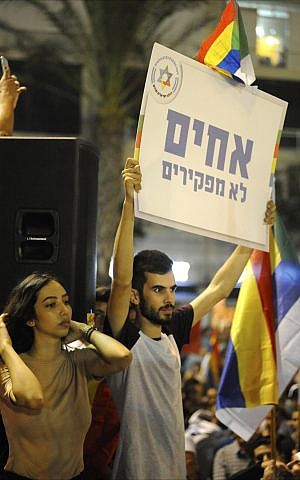 Although scandal-plagued Netanyahu is currently the front-runner, Pfeffer says he needs three things to ensure victory in 2019: “to keep the opposition weak, divided and discredited; to ensure that most of the right-wing votes go to Likud, and to frame the terms on which the election will be fought” — and to prevent the main issue from being his own suitability for office.

Pfeffer noted that, with two-thirds of Israeli voters unhappy with the prime minister’s handling of the ongoing Gaza crisis, this was the perfect time to “suddenly ram through” the nation-state bill.

“Netanyahu sees this law as a way to distract attention from his own legal issues with an anti-Arab law which is popular with his base. The real target of the law is his opposition — both within the right wing and on the center-left. Of course, he doesn’t give a damn about Israeli Arabs,” said Pfeffer. “It’s a nasty, undemocratic law that serves mainly to offend Israel’s non-Jewish minorities.” 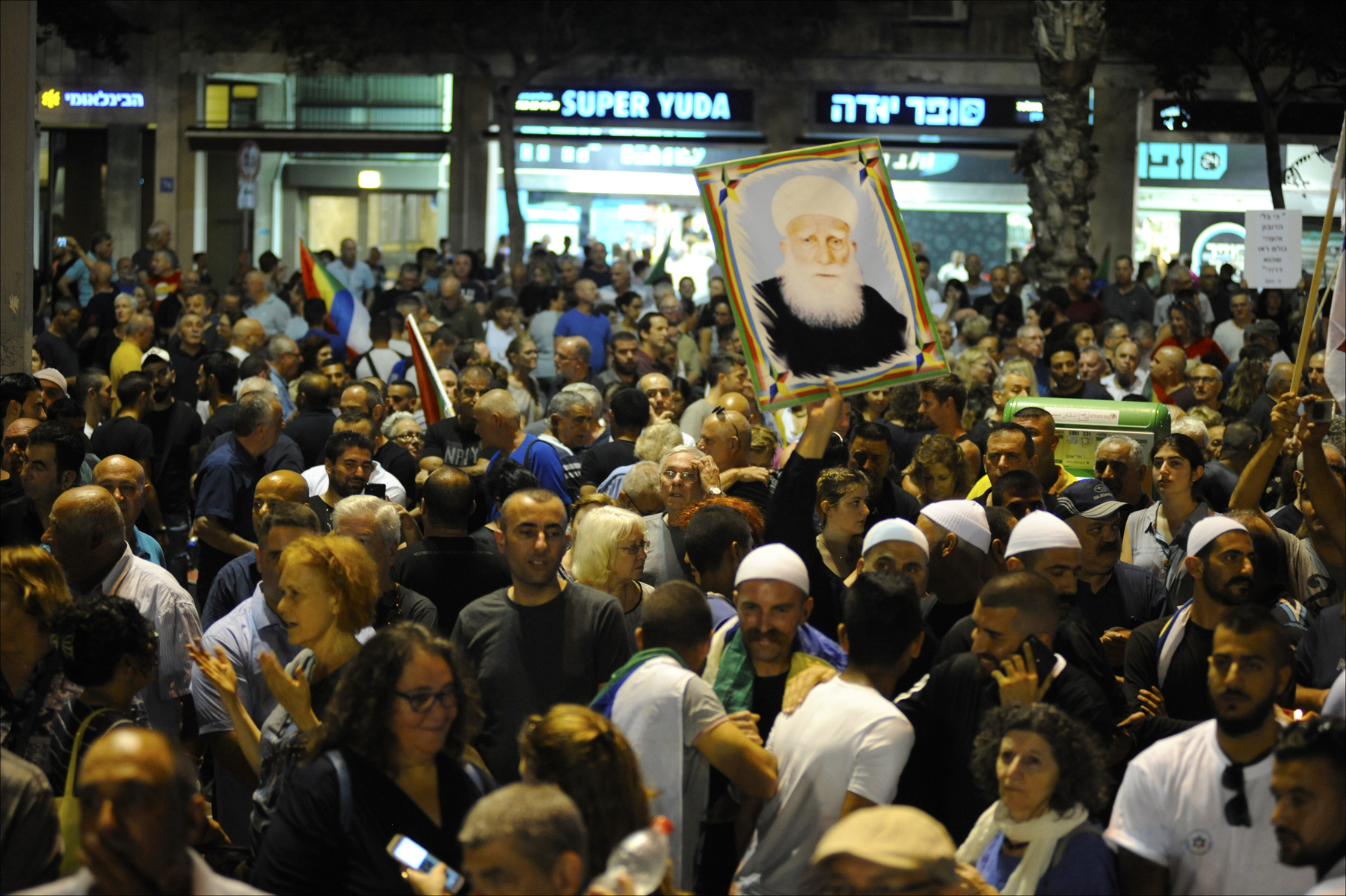 “Demoting the status of Arabic is just pouring salt in the wounds. The Arabic language never carried out a terror attack or posed a security threat,” he said. “So suddenly, Bibi decides that he’s more patriotic than Ben-Gurion or Menahem Begin, and demotes the status of Arabic.”

Odeh, who spoke at an Aug. 11 rally in Tel Aviv before 30,000 people — some of whom were openly waving Palestinian flags and chanting anti-Israel slogans — said earlier efforts to include the words “democracy” and “equality” in the now-passed law fell on deaf ears. 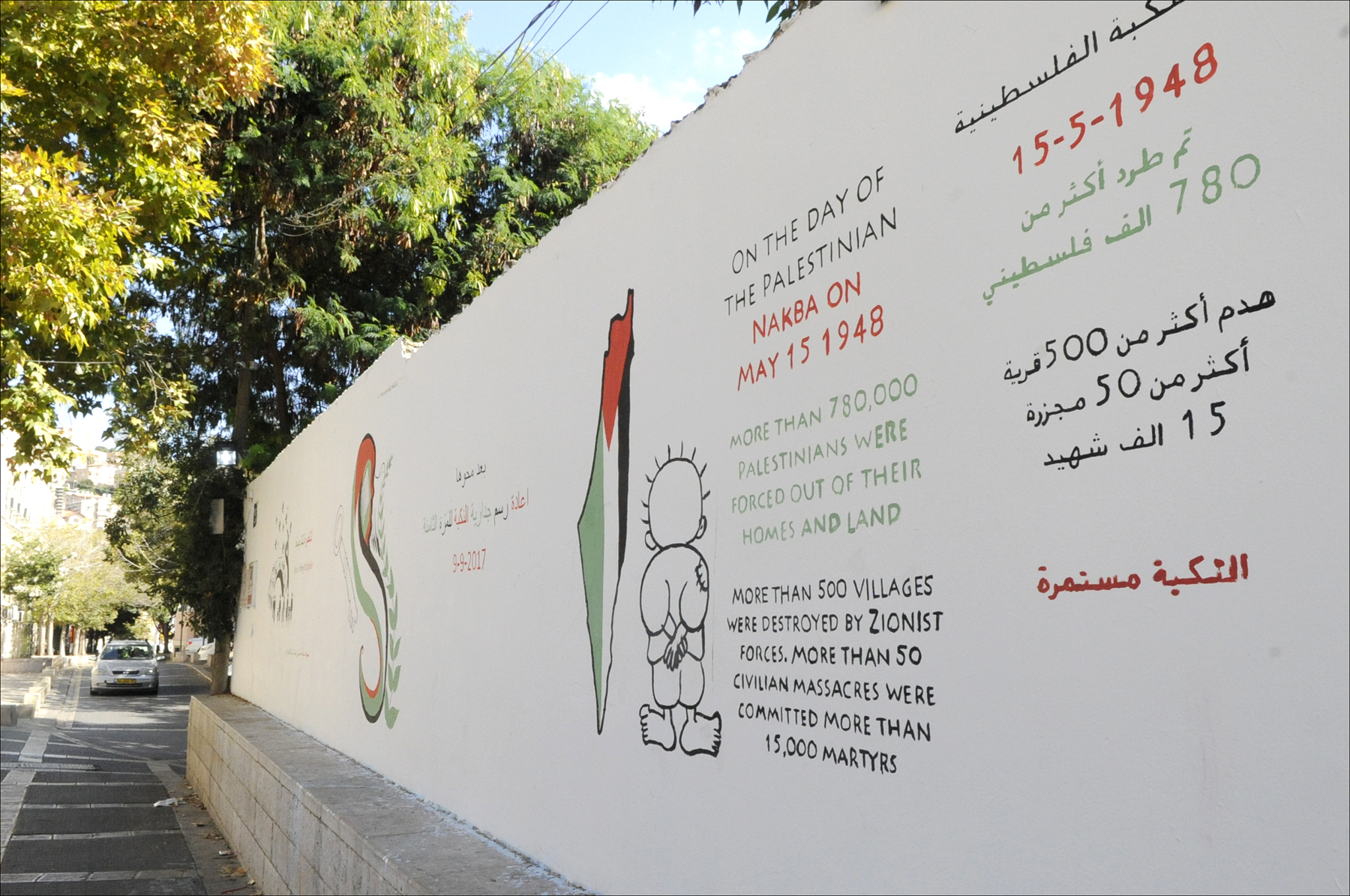 A mural in the predominantly Arab city of Nazareth calls attention to the Palestinian “Nakba” [catastrophe] of 1948 that coincided with the establishment of Israel. (Larry Luxner)
“Netanyahu was completely uninterested,” he charged. “From the very beginning, he wanted this law to secure national status for Jewish people in Israel. I also question the argument between the left and right wings. The left says this must be a Jewish and democratic state, but they don’t see the inherent contradiction between both concepts. They say this law contradicts Israel’s Declaration of Independence — yet even the Declaration of Independence was written and signed exclusively by Jews.”

Odeh insists he supports a two-state solution — “a democratic Palestinian state within the ’67 borders alongside a democratic Israeli state.” He added, however, that “Israel was built on the ruins of our Palestinian nation, and did not recognize the Nakba, the destruction of 400 villages, the land expropriations and the massive demographic shifts it created.”

What’s new about the nation-state law is that for the first time, it calls Israel’s status as a Jewish and democratic state into question.

“This is all part of Trump’s ‘deal of the century,’ because it’s the first law since 1948 that uses the term ‘Land of Israel’ without explaining what that land is,” he said. “We are living in the 21st century, in which people should be respected for their humanity, and all citizens should be offered equal rights. All we want is peace and equality between Arabs and Jews.”