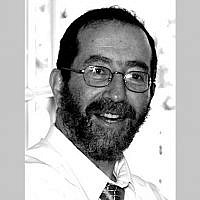 The Blogs
Avraham Edelstein
Apply for a Blog
Advertisement
Please note that the posts on The Blogs are contributed by third parties. The opinions, facts and any media content in them are presented solely by the authors, and neither The Times of Israel nor its partners assume any responsibility for them. Please contact us in case of abuse. In case of abuse,
Report this post.

am one of those who have been impressed by the achievements of the current government.  Everyone has wisely allowed everyone else to do their thing, the alternative being the collapse of the government. I am particularly gratified to see the efforts to bring down the cost of living. That the Jewish state is financially brutal to live in for the have-nots is to our shame.

This is a government of efficiency and that is to their credit. However, I can’t help feeling that there is something missing – something big. That something is the “why” of the State of Israel. What vision are we working towards? What goal is all this new efficiency meant to serve?

I imagine that, were I to ask the likes of an Avigdor Lieberman what his vision of that state is, he would describe the likes of a vibrant, secular democracy – a Western liberal state. (I apologize if I got this wrong.) Let’s see what that looks like: Bloomberg recently ranked Israel as 19th in Covid resilience – whoopee.  World Population Review ranks us as the 35th least corrupt state. We have  the 31st largest economy by GDP, way behind Poland, Thailand and Iran. (Worldmeters) We have the 8th highest cost of living. (Theglobaleconomy.com). We may be the start-up nation, but the average Israeli is struggling.  We are the 35th easiest country to start a business in. (tradingeconomics.com).  I could go on: Housing relative to income; income gaps between the top 1%, the top 10% and the bottom 90% and so on. In all of these things, Israel is mediocre. We won a nobel prize last year. The previous noble prize we won was eight years before that. We are 16th by country in the total amount of prize winners.

We can be proud of some of this. In most of these categories almost any advanced Western country comes before us. How long do we want to explain this away by saying that we are a new country with a small population that has fought several wars?  “We are mediocre. True. But we have plenty of excuses. We have, after all, been victims of war, and boycotts and newness and smallness and …” We are the almost-successful nation, and that is nothing to be proud of.

Is this the end-game of our glorious civilization? The Jews who contributed such a disproportionate amount to the world lands up as another goodish Western country. Hurray for the blah-ness of normalization! A nation almost like all others!

Chanuka was a battle of Athens versus Jerusalem, man-made wisdom pitted against its Heavenly alternative.  The Greeks understood exactly why the Jews were so powerful and it was not because the Jews were so clever. Take the G-d out of the Jews, the Greeks said, and we will out-wisdom them on our grounds. Their wisdom will become but a little department in the world of Hellenism. Let Shimon Hatzadik and his people keep their temple – we are reasonable people after all, said the Greeks. What we want is their minds.

There is one thing, and really only one thing, that we can excel in: Being Jewish. A democratic state of all of its citizens (including non-Jewish ones) – yes. But that is only a framework. A means to an ends. We have to develop a sense that our tikun is vital to redeeming this fractured world. We have to believe that we are capable of making the entire world a better place – by example, by sanctifying the material and by dedicating resources to the entire nation becoming more Jewish – not by force or law – but by showing the beauty of Judaism to all.

We have to feel that it is an amazing privilege to be living in this Holy Land. Ben Gurion quipped, “In Israel, to be a realist you have to believe in miracles.” I think we all believe in the miracles that have allowed the State of Israel to get this far. But those miracles and that privilege come with a price-tag – responsibility; responsibility to make our country a place of moral and spiritual excellence; of brilliance in Torah wisdom; of grace and kindness and gentleness of character.

So let’s light another Chanuka candle and begin to shine a light for the world.

About the Author
Rabbi Avraham Edelstein is the educational director of Neve Yerushalayim College for Women and is the executive mentor of Olami. He is the author of ‘the Human Challenge – on Being Jewish in the 21st Century.'
Comments