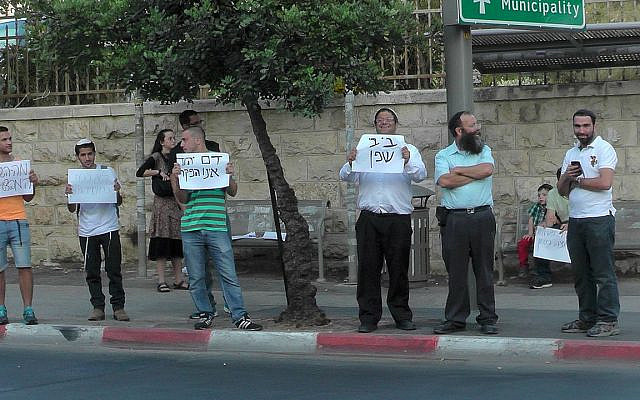 Otzma Yehudit head Itamar Ben-Gvir and his supporters protest against a Gaza ceasefire agreement in 2014 (Wikimedia).

With the 4th Israeli elections over the past two years in the books, political analysts are discussing which of the smaller parties might throw in a few extra seats to either the pro or anti-Netanyahu blocs to avoid 5th elections.

One party, though, which has 6 MKs and has already committed to the pro-Netanyahu bloc, is the Religious Zionist Party. The Religious Zionist Party is headed by MK Bezalel Smotrich and includes Itamar Ben-Gvir’s Otzma Yehudit party and the Noam faction. Together, they hope to create an exclusive right-wing government in Israel to promote their policies and ideology.

Regardless if there is going to be a government or not though, the Religious Zionist Party will still have 6 ministers in the Knesset until the next round of elections and, as Zionists who care about Israel’s future as a Jewish, democratic, and secure state, we must speak loudly and proudly against them.

It is also important to understand why we as Zionists, even those who live in the diaspora like myself, have a right to stand against the Religious Zionist Party.

Some might argue that it is not our place as American Jews to oppose the results of Israel’s elections because we do not live there. Of course, Israelis certainly have the right to vote for whoever they want. It may also not be appropriate for us in the diaspora to oppose domestic policies that impact Israelis’ daily lives. However, as Jews who uphold the values of Zionism and care about Israel’s safety, it is absolutely our place to have a say on parties and policies that affect the security of Israel and its moral integrity.

Although we live in the diaspora, the existence of a Jewish state provides Jews like us in places like America a sense of security. As Israel Policy Forum’s IPF Atid Deputy Director Shanie Reichman wrote last year, “As diaspora Jews, ensuring a safe and secure Israel is in fact ‘our business.’ It directly impacts our lives; I am one of the many American Jews who believes that no matter where we live, we are safer because of the existence of a Jewish state. That state, and its destiny, are not separate from us, not someone else’s responsibility or mandate.”

Indeed, the security situation in the Jewish state is tied to the Jewish diaspora as well. That is why many American Jews like myself at IPF Atid have been working with many of Israel’s top security officials, such as Commanders for Israel’s Security (CIS), the past few years to come up with creative ideas to ensure Israel’s security. One issue we have put particular emphasis on is the security consequences of West Bank annexation. For instance, about 85% of Israel’s security establishment believe unilaterally annexing large parts of the West Bank would result in significant security ramifications for Israelis and that the best way to ensure Israel’s long-term security is preserving the viability of a two-state solution with the Palestinians.

The MKs of the Religious Zionist Party, however, are some of the ideological leaders of annexation and are trying to prevent the possibility of a two-state solution. Thus, Zionists across the spectrum, including those in the diaspora, who care about the safety of the Jewish state and its citizens must speak out against them and their calls for annexation.

Another reason why Zionists should stand against the Religious Zionist Party is because they may also jeopardize the narrative and values of Zionism. As I wrote last year, I have proudly advocated for the State of Israel for years, such as on my university campus and as an intern for the American Israel Public Affairs Committee (AIPAC). I did so, and hope to continue to do so, because I espouse the values of Zionism. I grew up admiring Zionism because it provided a state for my people while also seeking to uphold the values of democracy and pluralism. Even when I did not agree with Israel’s policies or actions, I still advocated for the Jewish state because I felt it always respected the basic norms of human rights and democracy.

However, the issue with the Religious Zionist Party is not just about policies we may disagree with. Their members also seem to violate some of the most basic principles of tolerance and human dignity. For example, Itamar Ben Gvir, who is third on the list, is a disciple of the notorious anti-Arab figure Meir Kahane. He also has a portrait of Baruch Goldstein (a man who raided a mosque and killed 29 Palestinians in 1994) hanging in his office and has called to expel Arabs who are not “loyal” to the State of Israel — a term many countries throughout history have used as a pretext to target ethnic minorities.

Even Bezalel Smotrich, the supposed moderate of the party, has indicated support for expelling Arabs from Israel. For instance, last year in a twitter response to a couple of Israeli-Arab MKs, he quoted a phrase from the Book of Numbers that Meir Kahane often referenced when calling to expel Arabs from Israel: “But if you do not drive out the inhabitants of the land, those you allow to remain will become barbs in your eyes and thorns in your sides. They will give you trouble in the land where you will live” (Numbers 33:55).

If people like them find a place within Israel’s government, the narrative and identity of Zionism may fundamentally change to something that I, and many other self-identified Zionists in Israel and abroad, will not be able to identify with.

One might argue that the Religious Zionist Party does not pose a significant threat to Israel’s security or the values of Zionism because they only make up 6 out of the 120 Knesset ministers. However, as Harvard Professors Daniel Ziblatt and Steven Levitsky discuss in their book, How Democracies Die, one of the ways democracies have slid towards authoritarianism is when the larger mainstream parties choose to partner with the smaller radical parties. This is because when you include even the smallest party into your coalition, you are still granting them a certain platform and allowing their ideas to be normalized into the broader society.

In the case of Israel, Prime Minister Benjamin Netanyahu and his Likud party may not uphold the same ideology as the Religious Zionist Party does, but by including their ministers into their coalition, they will be legitimizing them and their ideas. Whether including them in a cabinet or just the coalition, partnering with figures like Ben-Gvir and Smotrich may embolden them because it offers them a certain platform and allows their ideology to be normalized into Israel’s broader society.

This is something we cannot stand for. We should make it clear to Netanyahu and others in the Israeli government that we are vehemently opposed to the inclusion of the Religious Zionist Party, not because we are anti-Israel activists who support the Boycott, Divestment, and Sanctions Movement (BDS), but because we are in fact proud Zionists who care deeply about Israel’s moral standing and future as a Jewish, democratic, and secure state.