Anyone who views the work of the organization that I head up, The Elijah Interfaith Institute, will see that our organization is tied to UNESCO. 18 years ago, in an attempt to signal that our interfaith work represents equally all religions and is not dominated by one tradition, we turned to UNESCO to obtain sponsorship. Today, I am ashamed to acknowledge this association. It is not simply that UNESCO has issued a false statement. Nor is it just that the power of good, the lessons of rationality and the very raison d’etre of the organization, as a neutral body entrusted with advancing educational goals, and one that seeks to cultivate a culture of peace, are hopelessly shattered by political realities that make all the principled intentions of UNESCO useless. The frustration, and shame, are deeper, because of the hopelessness of bringing about change in this political organization and because the voices of sanity within the organization have not been powerful enough to stop the insanity. Let us revisit the story and allow me to relate to two such voices.

The UNESCO statement on Jerusalem has been in planning for some time. Yesterday’s news of the recent statement is a continuation of previous statements by UNESCO.

Israel has found itself time and again on the receiving end of difficult UNESCO statements, drafted by Arab countries. At the heart of the present discussion is a document that is one-sided in its affirmation of Palestinian rights and of a Muslim narrative concerning Jerusalem and the Temple Mount, as well as Hebron and other holy sites. The document dismisses Jewish narratives concerning local holy places, expressed symbolically by referring to the Western Wall in quotation marks, while its Arab name, named after a Muslim view of the place, is presented as the true name of the site. In other words, UNESCO issues a statement that relates to a contested holy site by effacing the narrative of one side and doing injustice to historical memory. The statement was made by the Executive Board of UNESCO, at the initiative of Algeria, Egypt, Lebanon, Morocco, Oman, Qatar and Sudan, and is therefore highly colored politically.

The statement from yesterday is nearly identical to a statement issued several months ago within UNESCO.

The Voice of the Director General

One of the tensions that makes the work of UNESCO complicated and often ineffective, is the tension between members states and their initiatives and the work of staff, headed by UNESCO’s Director General, the Bulgarian Irina Bokova. Staff is more professionally oriented and as in the present case, would seek to diffuse unnecessary tensions. 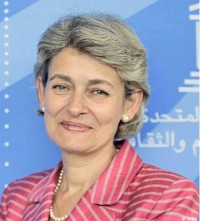 Bokova issued the following response to the earlier statement: “Jerusalem is a Holy Land of the three monotheistic religions, a place of dialogue for all Jewish, Christian and Muslim people, nothing should be undertaken to alter its integrity and authenticity… Only respect and dialogue can build the trust we need to move forward — this is the strength of UNESCO, for the benefit of all.”

This is, in and of itself, a very appropriate response, and it offers the right direction for how work should be undertaken.

What has remained of this valiant attempt to be balanced? The new document, Clause 3, reads: “Affirming the importance of the Old City of Jerusalem and its Walls for the three monotheistic religions”. On the face of it, we have a balanced statement, recognizing Jerusalem’s sanctity for all three faiths. However, not only is this a token statement that is emptied of meaning by all that follows. Note what is important in Jerusalem – the Old City and its Walls. Well, it is not the walls of the Old City that are important to Judaism. These were built by the Turks. It is the very heart of Jerusalem, the Temple Mount, whose Jewish associations are being effaced in the document. Substituting the periphery for the heart of Jerusalem is a farcical show of even-handedness. Put differently, the voice of sanity, represented by the senior staff of the organization could do no more than lead to a pseudo-balanced introductory clause. The rest is hostile politics.

The Voice of Scholars

There is more to UNESCO than the member states and its own staff. UNESCO brings together a significant body of international scholars. UNESCO’s UNITWIN program creates networks of cooperation between scholars worldwide, in a variety of areas, all relating one way or another to its mission.

One of these networks is involved in interreligious and intercultural studies and I know this network intimately, having been involved in it since its inception.

It was clear to me that the recent UNESCO statement violated the guidelines that academics, dialogue specialists and peace seekers would expect from the organization. And it was important for me to give this voice a hearing. Following the earlier round of attention, the UNESCO statement on Jerusalem got, I turned to members of our network and asked them to sign with me a letter to the Director General that would give voice to an alternative approach for how UNESCO should go about the business of religion, especially in situations of conflict.

The message of scholars to the Director General sought to affirm two principles, and had these principles been followed, the recent statement could not have been issued:

a. Any representation of a situation of conflict, especially one with deep historical roots, must be faithful to the multiple narratives of all sides. No side must feel that its historical memory is being erased or sacrificed in favor of another.

b. For any dialogue work to succeed, it must be based on all sides feeling they have been heard and for processes of understanding and healing to emerge out of fair-minded, historically balanced, presentations of all sides to a conflict.

The scholars asked that their expertise be consulted when situations of religious conflict are brought to UNESCO’s attention. (For the full text, click here)

A meaningful number of scholars and experts from around the world, ranging from New Zealand to the United States, and representing 3 faith traditions, were able to identify with the message to the Director General.

What happened to that voice? Nothing really.

This is a moment of frustration and shame. There are forces of good in UNESCO. Yet, at crucial moments, they are not strong enough to keep in check the forces that use the organization for political ends.

Naturally, I ask myself why should I stay with UNESCO? There are, I suppose, two senses to “resignation.” I could resign from UNESCO. Such resignation would be as inconsequential as the good words of the Director General and of the scholars whose support I obtained. I could also resign myself to the situation as a kind of evil one has to live with, in order to cultivate positive relations and do good work, away from the moments of scandal and far from the public eye. I suppose this is why Israel is not withdrawing from UNESCO. At the end of the day, the opportunities for doing some good seem more significant than the frustration at my inability, and that of the organization, to keep politics in check and to advance a purer program of global educational activities. So I may not resign, but I can be ashamed. And that I am. UNESCO — Shame on you and what shame I feel to be a part of you!