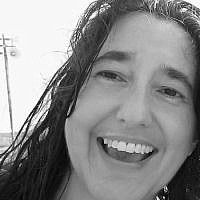 The Blogs
Loolwa Khazzoom
Apply for a Blog
Advertisement
Please note that the posts on The Blogs are contributed by third parties. The opinions, facts and any media content in them are presented solely by the authors, and neither The Times of Israel nor its partners assume any responsibility for them. Please contact us in case of abuse. In case of abuse,
Report this post.

“Can you believe she’s Jewish?”

The photo featured a young woman with straight blonde hair, blue eyes, and a turned-up little nose. It was sometime in the 1990s, and I was looking at the ad for a Jewish dating site.

I was a young Jewish woman with wild, dark, curly hair, dark eyes, and the classic Jewish nose featured prominently on my face. Girls like me were told, routinely – by family, by peers, by media – that we were not pretty, because we did not look like, well, that photo on that there Jewish dating site.

In high school, I went through numerous major magazines targeting girls and young women, counting how many models had dark hair and dark eyes. In that entire collection, I could count the dark-haired models on one hand, and there was exactly one with dark eyes – in an ad for the brand new option of blue and green contact lenses, with the tagline, “Now you, too, can have beautiful eyes!”

It’s been nearly four decades, and I still remember that tagline, word-for-word.

At Barnard College, I loved the sight of classmate “Tamar”, a drop-dead-gorgeous Jewish woman with jet black hair, flashing black eyes, and an exquisite Jewish nose. Seeing her, and recognizing how stunning she was, not despite how Jewish she looked, but because of it, reflected back the beauty of my own features, most importantly, my nose.

Then, like so many Jewish girls and young women on the East Coast, Tamar got a nose job.

After that, she looked plain to me. Ordinary. That realization, perhaps the most powerful of all, drove home my understanding not only that I was beautiful, but that my own Jewish nose was a distinct part of my beauty.

As most people forget or choose to ignore, the Jewish people hail from the Middle East, and therefore historically share the physiological traits of others in the Mediterranean region – including the “JewFro” and the “JewNose,” which are not, in fact, exclusive to Jews but are shared by Arabs, Italians and the like. Through mixing with the locals in Central and Eastern Europe, over the generations, the skin and eye color of Ashkenazim got lighter, but other racial/ethnic traits remained.

For decades, a nose job – the act of erasing one of the last remaining physical marks of Jews’ indigenous Middle Eastern roots – has been a rite of passage for Ashkenazi girls. By way of comparison, through generations of blending with other ethnicities in the United States, there are now African-Americans (including African American Jews) with light skin and blue eyes, who for the most part can pass as White, but who still have the kinky hair and nose shape of their African ancestors.

Here too, Black women routinely alter their appearance, most commonly by chemically straightening their hair – thereby erasing a physical mark of their African roots. While nose-bobbing and hair-straightening certainly may be a matter of personal preference, that preference, in turn, may be the result of internalized racism slipping by, unexamined, as an aesthetic proclivity. Like when I kept buying blonde Barbie dolls as a kid because they were “prettier” than the darker ones.

Today, 30 years after I graduated from Barnard, Jewish women are still mutilating their beautiful Jewish noses, as well as straightening their fabulous dark brown JewFros and dying them blonde, even when doing so requires the use of chemicals that have been proven to cause cancer. It’s all in the name of looking “beautiful,” or more to the point, “not Jewish.”

You know, so they can appear more like that Aryan woman in the ad for the Jewish dating site.

For all these reasons, and a handful of others, my band is releasing a new single and music video, “I Love My JewFro!” in which I flaunt the very Jewish features that have been denigrated for centuries, and that I and other family members felt shame or self-hatred about growing up. The song incorporates the traditional Iraqi Hanukkah song, and I am releasing the single and music video on Hanukkah. That’s because the holiday celebrates a bold insurgence, an uprising against assimilation, an expression of radical self-love, a willingness to stand up to the most powerful forces on the planet and defiantly declare, “I am a Jew. This is my home.”

And I want the Jewish body to finally, finally feel like home.

About the Author
Loolwa Khazzoom (loolwa.com) founded the band Iraqis in Pajamas (iraqisinpajamas.com), which combines Iraqi Jewish prayers with original punk rock. Her work has been featured in NY Times, CNN, Rolling Stone, and other top media. Her two books, The Flying Camel: Essays on Identity by Women of North African and Middle Eastern Jewish Heritage and Consequence: Beyond Resisting Rape, have been taught at Ivy League schools and universities throughout the USA.
Related Topics
Related Posts
Comments