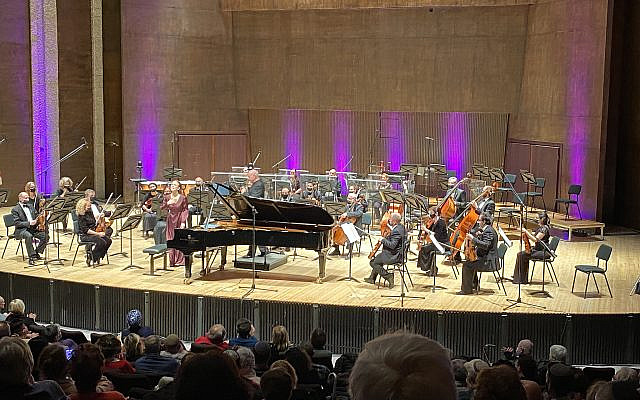 After a year of living in a cultural desert, the ban on public performances in Israel has finally been lifted. And last night when we were able at last to attend a real live concert.

The requirements were clear: anyone who had bought tickets had to provide proof of having been vaccinated twice, as well as a certificate of identity. The seating arrangements were equally stringent, with an empty seat between anyone not from the same household (very handy as a place to put one’s coat). We were told to come at a set time before the concert so that arrival times would be staggered. This being Israel, however, that particular requirement was tossed aside as people struggled to locate the necessary documents on their mobile phones and had to be helped in this by the staff. Although there is no age limit on getting vaccinated in Israel, the vast majority of the recipients are the over-sixties, and it was that age-group that constituted the majority of the audience.

Despite all the restrictions, the atmosphere was joyful. As is customary with the Jerusalem Symphony Orchestra, since this was the first concert of the season a chocolate treat (a Ferraro sphere) was handed to each member of the audience as they entered the building. The familiar foyer of the Jerusalem Theatre was as festive and welcoming as ever, and even though social mingling was not allowed, there were many smiles and waves as people recognized familiar faces they hadn’t seen in over a year, and even strangers enjoyed one another’s company – from a distance.

Once everyone was seated, in accordance with the Coronavirus regulations, the orchestra filed in and took their places on the stage to enthusiastic applause from the waiting audience. The members of the orchestra replied in traditional manner by stamping their feet or tapping their instruments, thus creating a thunderous noise. Like the audience, all the players were wearing masks, except for the wind and brass players, who were seated behind perspex screens.

More applause greeted the entry of the conductor, Doron Solomon, who was evidently moved. From the dais he turned to the audience and spoke briefly, saying how happy and honoured he was to be conducting the wonderful orchestra at this landmark concert, adding that he admired and respected every single member of the audience.

With the first strains of the music, Schubert’s overture to Rosamunde, the peace that only music and harmony can bestow on hundreds of assembled souls descended on the auditorium. No one coughed, no cellphone ringtone rang out and everyone was on their very best behaviour, treasuring the moment as a precious jewel to be stored in one’s memory of momentous events.

It bears noting that while in the past it was almost trivial, or at least routine, to go to a concert, last night’s performance was a momentous event. How I – and I believe many others – had longed for that moment when the orchestra began to play!

Needless to say, the music was inspiring, and the piano concerto by Haydn was played with aplomb by the very talented Ofra Yitzhaki. As an encore, after enthusiastic applause, she treated us to a delicious arrangement of a charming Israeli song disguised as a lied by Schubert (I wish I knew who arranged Schubert’s ‘Serenade’ as the introduction and accompaniment).

In line with the Coronavirus restrictions, there was no intermission, as that would have been the signal for the traditional social mingling. Hopefully, that, too, will come in the fullness of time and vaccinations. The concert ended with a fine performance of Schubert’s fifth symphony, followed by more long and enthusiastic applause, and then it was time to venture out once more into the cold Jerusalem night.

But our hearts were warm.