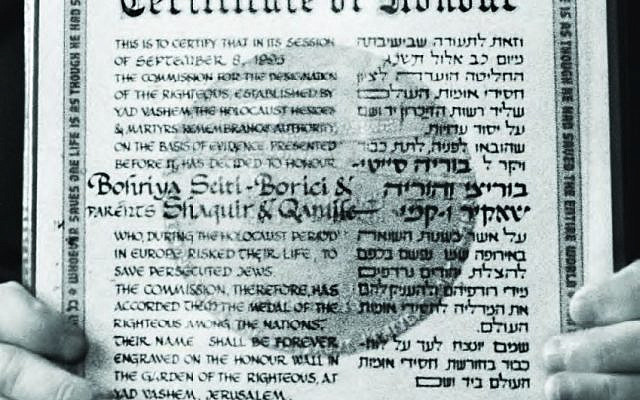 At a time of rising Islamophobia as well as anti-Semitism both at home and abroad, Stephen B. Jacobs says the world must never forget how the predominantly Muslim nation of Albania told its wartime Nazi occupiers in no uncertain terms: Leave our Jews alone.

As a 5-year-old boy from the Polish city of Lodz, Jacobs had already survived the horrors of the Piotrków ghetto prior to its liquidation in 1942, as well as Germany’s infamous Buchenwald concentration camp, before ending up in the camp hospital’s tuberculosis ward. But he wasn’t sick. His father, a physician, had arranged to hide him and another boy there—knowing no German would enter such a place—until Buchenwald’s liberation a short time later by the US Third Army on April 11, 1945.

Jacobs—who was born Stefan Jakubowicz—grew up to become a prominent New York architect. And even though by some miracle his entire immediate family survived, the nightmarish experiences of the Shoah never left him.

On Jan. 24, Jacobs gave the main address during an online program organized by the Atlanta-based nonprofit group Am Yisrael Chai to mark International Holocaust Remembrance Day.  Among other things, he described the deprivations he lived through, and why the Holocaust memorial he designed in Tirana, Albania’s capital, means so much to him. 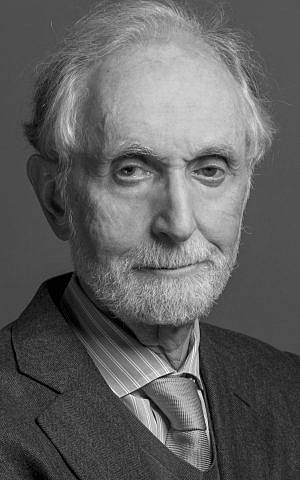 “Albania is a Muslim-majority country, and this story about Muslims saving Jews is very relevant for us today, particularly because of the ways Muslims are being stigmatized,” he said Jacobs, now 81. “We need to combat this horrible stereotype.”

Since Albania’s emergence from 45 years of Marxist rule in 1990, numerous stories have emerged of the bravery of its inhabitants who, during World War II, protected not only the country’s own 200-member Jewish community but also another 1,500 to 2,000 Jewish refugees from Bulgaria, Greece and other nearby countries. No fewer than 75 Albanians are honored as Righteous Among the Nations by Yad Vashem in Jerusalem.

“Albania is the only occupied country that had more Jews after the war than at the beginning,” noted Andrea Videlefsky, president of Am Yisrael Chai and the evening’s master of ceremonies. “They did this through good faith, unconditional solidarity, trust, and a deeply rooted cultural belief in besa—the promise to do better, to be better, to help fellow human beings in a time of need. We can learn so much from the principles of besa.” 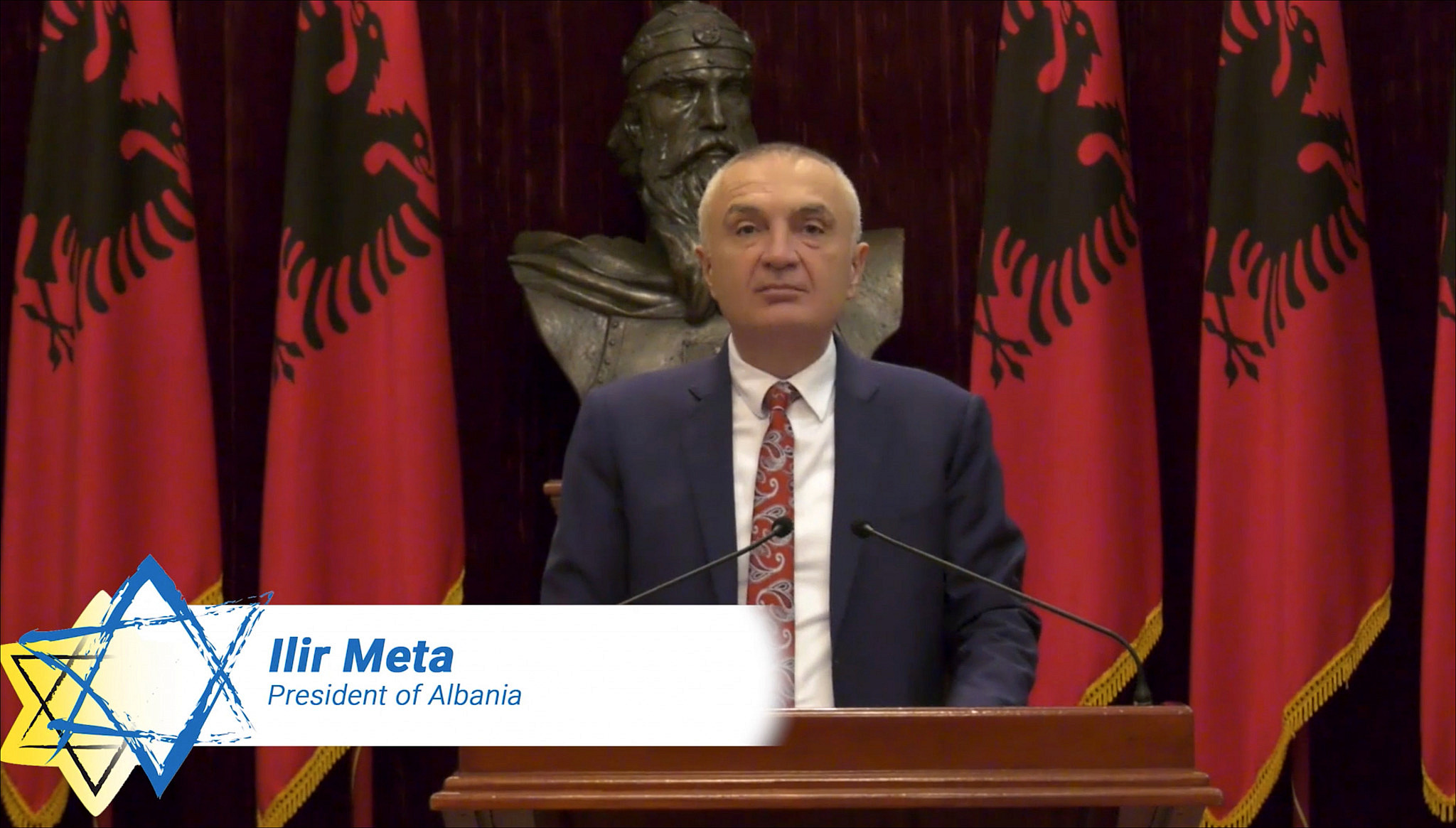 That message was reinforced during a four-minute video greeting from Tirana by Albanian President Ilir Meta.

“Our two peoples are linked with the historical bond of friendship that has transcended many generations,” said Meta, flanked by a row of red-and-black Albanian flags and a bust of the national hero, Skanderbeg. “It is this bond that compelled Albanians to extend our hospitality and shelter to the local Jewish community and to all those who were escaping from almost certain annihilation during the violent darkness and horrors of the Second World War.”

Regarding the German occupation of his country, which lasted from September 1943 to November 1944, the president added: “Not a single Jewish life was lost in Albania, and not a single Jew was handed over to the Nazi occupiers. Many Albanian families risked their lives for the noble mission of protecting Jewish lives.”

Jacobs: ‘Unfortunately, history does repeat itself

Even though Jacobs had no personal connection to Albania, its hospitality towards the Jews resonates deeply in an era of rising intolerance and xenophobia—whether by Donald Trump rallying against Central American immigrants fleeing violence across the US border with Mexico, or his supporters in Charlottesville, Virginia, screaming “Jews will not replace us!” Or by far-right Europeans protesting the recent influx of Muslim families escaping civil wars in Syria, Iraq and Afghanistan. 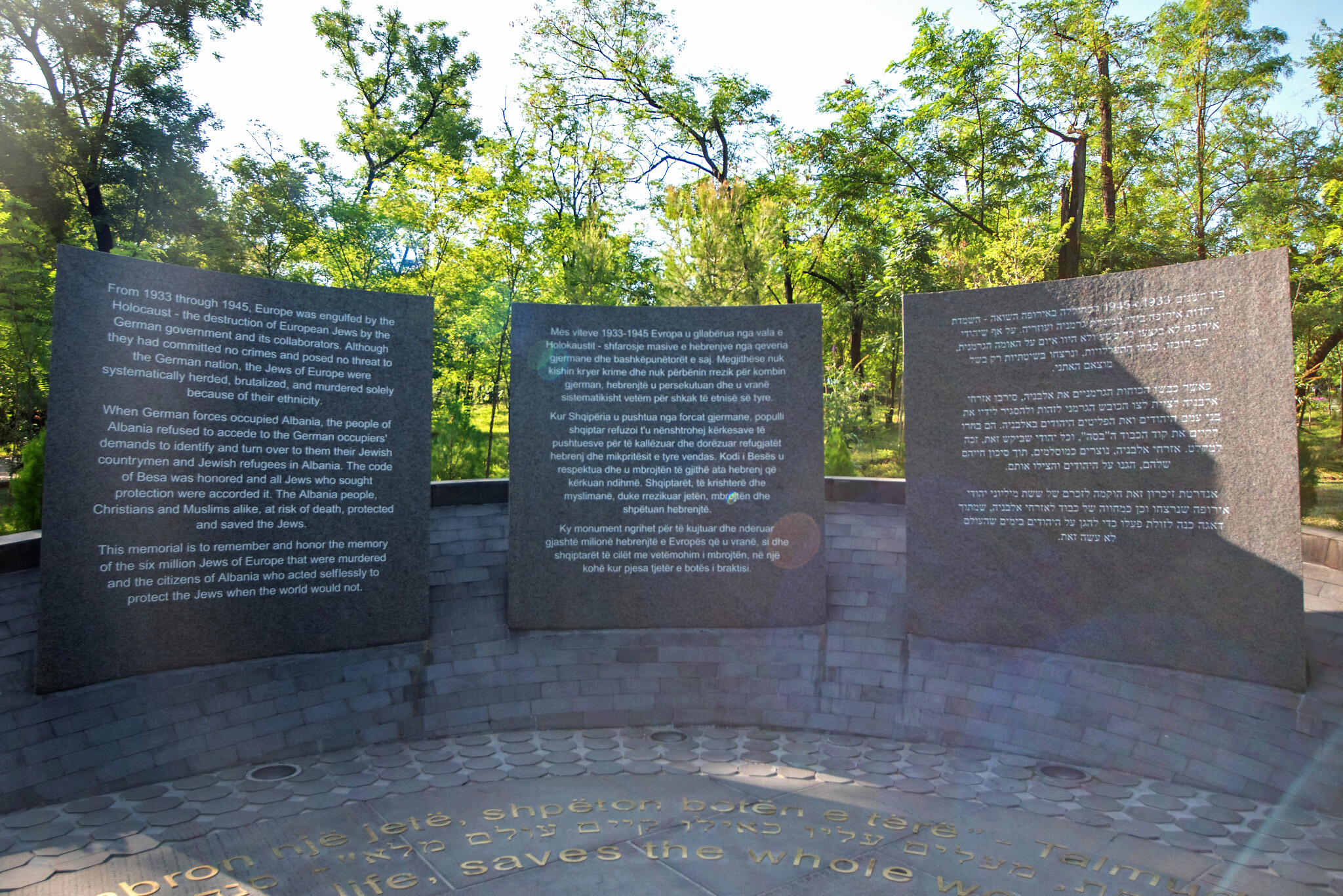 New York architect and Shoah survivor Stephen Jacobs designed this monument in Tirana, Albania, to the six million Jews murdered during the Holocaust. (Photo courtesy of Stephen B. Jacobs)

“Today’s attitudes toward refugees are so reminiscent of the attitude toward Jewish refugees in the 1930s. I identify with the refugees of today as much as from the time I myself was a refugee, because unfortunately, history does repeat itself,” said Jacobs, whose views against the former president are well-known.

“Fascism doesn’t come in an instant,” he added. “It comes by small increments, and small increments get people used to accepting the unacceptable. That’s the danger of what we’re in today. It doesn’t have to end that way, but it will unless there is a strong and concerted effort to expose this for what it is, and two, to put all our energies into not letting it happen again.”

To that end, Jacobs—who with his family lived in various refugee camps in Switzerland for three years before arriving in New York in 1948—is convinced he’d never have survived if not for the underground partisan movement which protected him and 1,100 other children. 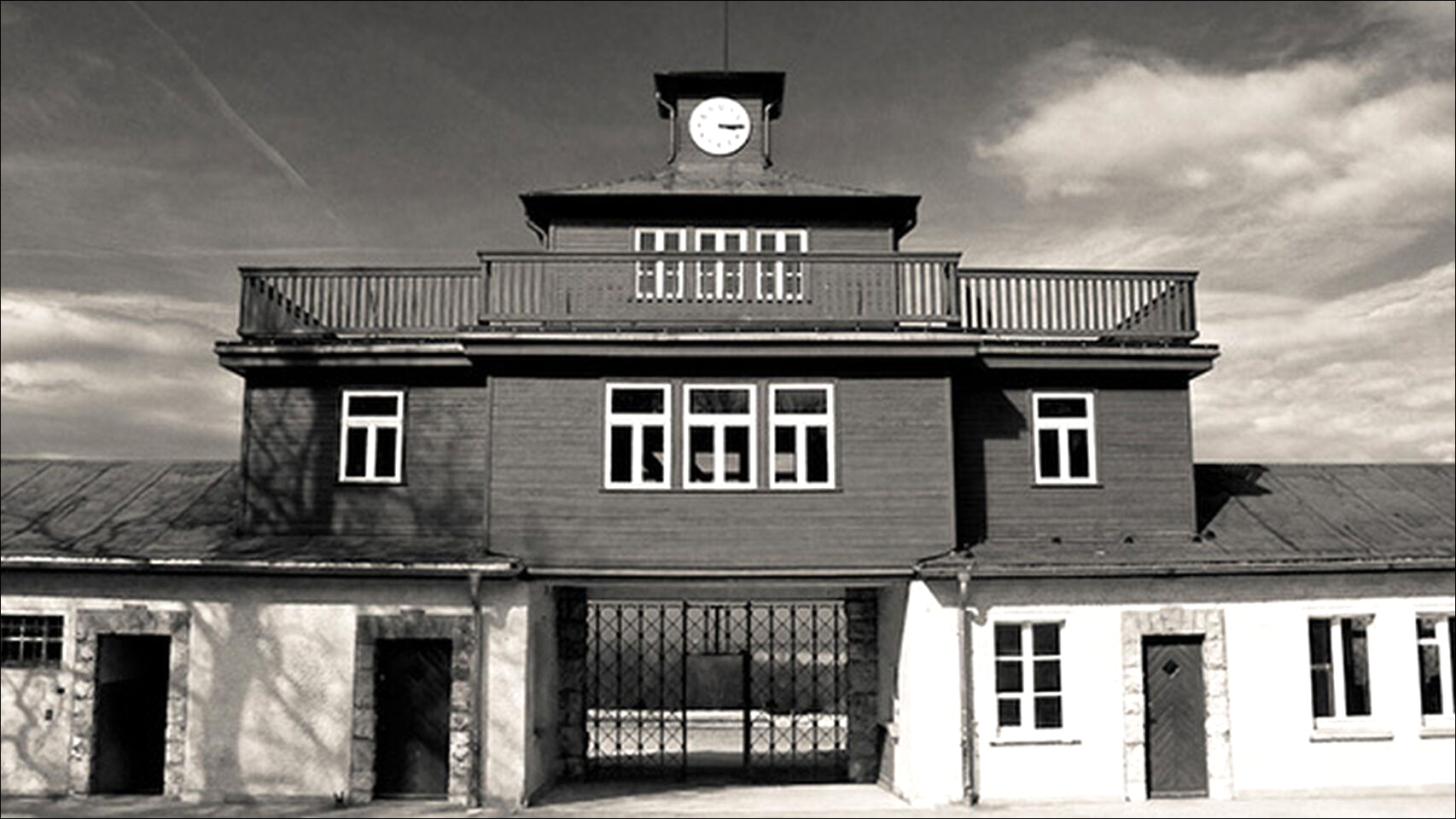 Jacobs, the only known Shoah survivor to have designed a Holocaust memorial in Europe, was present at the 2002 dedication to his monument at the “little camp” of Buchenwald—a quarantine zone where new prisoners, including himself, endured brutal conditions.

“The gates of Buchenwald are still there,” he said. “It was very important to restore that site and create a space for quiet contemplation, where you could put your thoughts together as to what you had just experienced. We are not doing this for us, but for future generations of German schoolchildren.”

1.5 million daffodils to remember the kids

Due to the coronavirus pandemic, Jacobs couldn’t attend the July 2020 inauguration of his memorial in Tirana, which features three marble slabs—in English, Hebrew and Albanian—that simply tell the story of the Shoah, and Albania’s role in saving Jews during the war. It’s located at the entrance to the capital’s Artificial Lake Park, close to Mother Teresa Square.

“In recent years, I’ve come to the realization that I’m among the last of a generation of Holocaust survivors who can testify to this event through personal experience,” he said. “It’s very important to maintain the memory of the Holocaust because it has universal significance — and because there are so many revisionists of history who will wipe out this memory because it suits their narrative.” 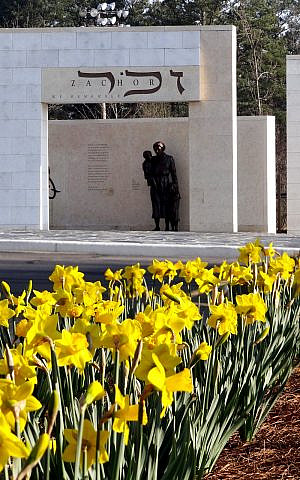 The Worldwide Daffodil Project hopes to plant 1.5 million daffodils to honor the 1.5 million children murdered in the Holocaust. (Photo courtesy of Am Yisrael Chai)

Among other initiatives, Am Yisrael Chai’s Worldwide Daffodil Project aims to plant 1.5 million daffodils in memory of the 1.5 million children who died in the Holocaust—and for children suffering in humanitarian crises around the world today. To date, about 664,000 daffodils (most of them in Georgia) have been planted in 266 gardens throughout the United States as well as the Czech Republic, Canada, Israel, Japan, Poland and the Netherlands.

By coincidence, Am Yisrael Chai’s online event took place only a week before the official establishment of diplomatic relations between Israel and Albanian-speaking Kosovo, a breakaway republic of Serbia that, like Albania, was also occupied by the Nazis during World War II.

“Hashem has been good for the people of our nations, and has blessed us with peace and freedom in our lands,” said Meta, the Albanian president. “We welcome the most recent developments between Israel and our brothers in Kosovo for the pledge to recognize Kosovo as an independent state. We’d like to take advantage of this opportunity to thank the leadership of our mutual friend, the United States, for this historic development.” 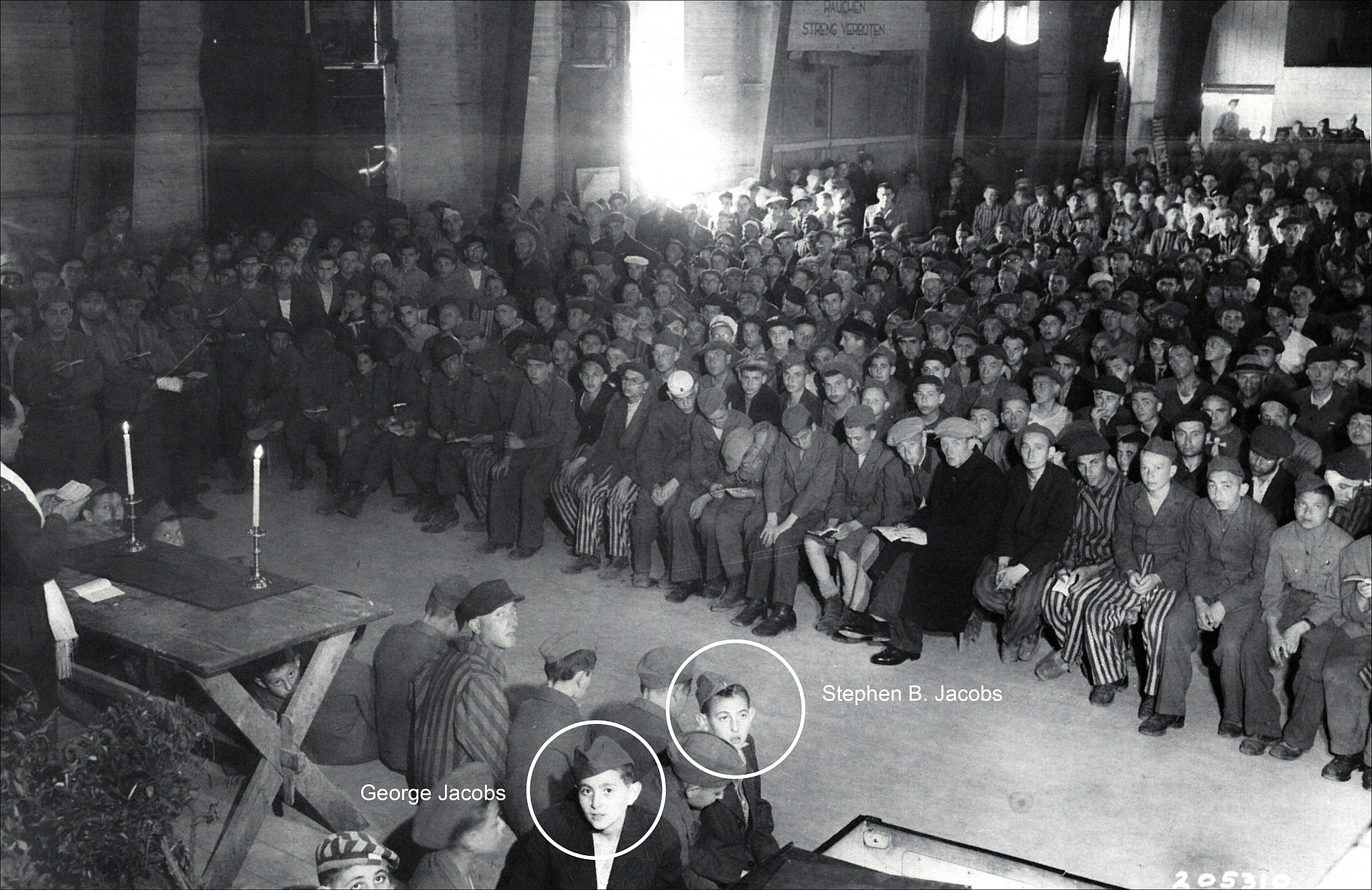 “It is for me a particular honor to be able to link myself with someone who met my father in hell, in Buchenwald, so many years ago,” the Yeshiva University professor said of Jacobs. “I feel that this evening is a Buchenwald memorial and reunion.”

“Following the German occupation in 1943, the Albanians remarkably not only protected all of their Jewish citizens, but also provided sanctuary to all those Jewish refugees who arrived to Albania who now found themselves in danger of deportation to concentration camps,” said Sultan-Dadon. “Albania—the only European country with a Muslim majority—demonstrated moral clarity where other European nations failed.”

Added Mayor Paul: “As the Bible says, ‘there grew up a pharaoh who knew not Joseph.’ Well, if we don’t keep talking about this tragedy, unfortunately it will be lost to history.”