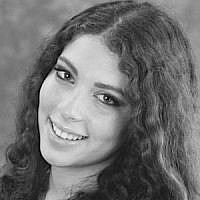 The Blogs
Hadassa Raice
Apply for a Blog
Advertisement
Please note that the posts on The Blogs are contributed by third parties. The opinions, facts and any media content in them are presented solely by the authors, and neither The Times of Israel nor its partners assume any responsibility for them. Please contact us in case of abuse. In case of abuse,
Report this post.

Recently returned from the annual CAMERA on campus conference in Boston, Massachusetts, I am filled with conflicting emotions.

The conference included four intense days of workshops, discussions and speeches to prepare us to return to campus and effectively defend Israel. I learned many practical things during the four days, like how to fight BDS or how to determine if an article is misconstruing facts. I made many new friends and my love for Israel blossomed further.

I was proud and inspired by all the Pro Israel student leaders that surrounded me, but I quickly noticed I was one of very few religious students. I was disappointed to see that, knowing how important the Jewish homeland is to us as well.

I understand that not all of us Jews agree, quite the contrary, actually. There are so many different beliefs and attitudes towards Israel amongst the many shades of Jewish faith, and unfortunately, it divides us.

Many Jews do not agree with a lot of what goes on in the Israeli government. Some believe there shouldn’t even be a sovereign Jewish nation. However, I know we all agree that the land of Israel is our Gd given homeland. I know that every Jew believes that our nation has a right to exist, to flourish, and be free to practice our beloved faith. This cannot be argued; in this we stand united.

Therefore, how can we sit by idly while people filled with hate and perversion attempt to pave a path toward our destruction? How can we close our eyes and turn our faces while they try to take our homeland from us, laugh at our G-d and defame our name?

I was quite honestly embarrassed at the lack of support and passion in the religious communities.

Anti-Semitism has a new face, Anti-Zionism. A new name for the same disease. Many of the students I met during the conference shared stories that chilled me. Being called names like “baby killer” and “ZioNazi” were daily occurrences for some of them. Hate-filled students wave posters depicting IDF soldiers with Nazi swastikas on their breasts. They wave banners featuring Jews with peyot and pointed teeth, red blood dripping from their hands, modern day blood libels…

These people do not want peace between the nations. They don’t want a two state solution or more land. These people want death and destruction for the entire Jewish people.

Anti Israel groups do not make a distinction between Jews and Zionists, right wing or left, religious or not. Why should we?

We must band together. The religious community must stand up for our beliefs and defend our Jewish homeland. We need to join the fight alongside our brothers who have been fighting without us all this time. We need to show the world a united front, prove we treasure our land and we will fight for her, because she is rightfully ours.

So please, I am begging you. Set aside your problems with the state of Israel and its politics, because the security of Israel and our people is more important. Push away your reluctance to work with those different from you; show the world we care. We need join the front lines of the fight.

This is our battle, too.

About the Author
Hadassa is currently a student at SUNY Rockland, and the founder and president of the pro Israel club on campus. She is a religious Jew, with an unwavering passion for Israel.
Related Topics
Related Posts
Hadassa Raice
Comments