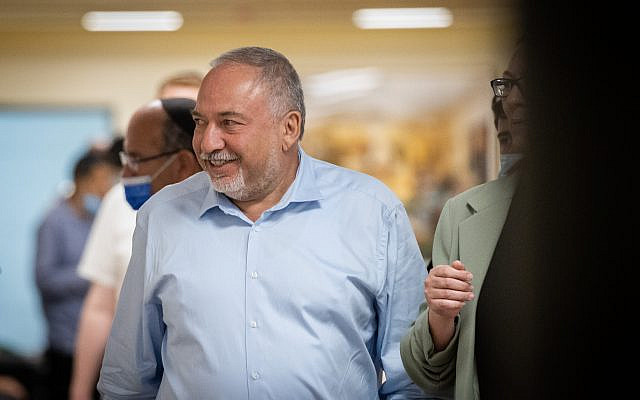 Yisrael Beytenu party chairman Avigdor Liberman arrives at a faction meeting in the Knesset in Jerusalem on May 31, 2021. (Yonatan Sindel/Flash90)

Finance Minister Liberman has announced that the state will no longer give child care subsidies to families in which one parent (who is physically and mentally fit) does not hold paid employment of at least 24-hours a week. The measure targets the Haredi sector, with its system of kollelim – yeshivot for married men – who, supposedly, are studying Torah all day so cannot (and should not), work for a living and support their own families. This subsidy has been a perk of the growing Haredi sector and in particular, a tchupar, to use IDF lingo, for the Haredi parties, more about whose involvement in all this, below.

If this measure holds, meaning, that Bennett and Saar don’t reel Liberman back because they anticipate someday needing the Haredi parties in order to be prime minister in a government less in need of constant massaging and compromise than this one, this could be huge.

The men this measure targets have no work skills. They can’t just go out and get jobs; they are illiterate in anything but Talmud. Even the market in menial, minimum wage jobs can’t suddenly absorb an influx of tens of thousands of these men. So it would make sense to phase this in over, say, a year, and give these men time to learn some skills.

But in this case, a gradual ramp-up doesn’t make sense because Liberman can’t be sure this government will be in power in a year, with him in charge of the Finance Ministry. There is no delaying this move.

If it holds, it will be the first real measure toward ending Israel’s endemic dysfunction and corruption about and in the Haredi sector since its beginnings under David Ben Gurion.

The corruption part is that many of the men who supposedly are studying Talmud all day are doing nothing of the sort. We all know this but I have heard it directly from someone who was studying for real, full time, for years, in prestigious kollelim. He was once in a kollel of two, he and the only other real student. The rest of them with that status were…who knows where. They could be working in the “gray” market – the huge off-the-tax-roll economy, which hurts the rest of us tax-paying types as much as the subsidies these men get, on top.

The ones who want kollel participation to serve as their army exemption need to get a note from a rosh yeshiva that they are – wink, wink – studying Torah all day. For a price, they get that, and are never seen in the yeshiva, never mind on any army turf, again. Which means that this system is a racket for the heads of the yeshivot, who don’t want it to end. Which means, despite what they or their representatives say, they want the draft requirement and the exemption provision to continue. And they’ve had the Haredi parties protecting all that. These are parties that hold on to their voting constituency by keeping that constituency impoverished because then they need the Haredi parties to keep the subsidies coming. On our tab.

The draft exemption con should be next on someone’s agenda. This would appear to be Defense Minister Gantz’s opening. Unless he has the Haredi parties on his radar. But Liberman has upped the game about all this.

His measure has the blessed potential to break the political power of the Haredi parties, of that whole theocratic, misogynistic, homophobic establishment. In which case, ambitious politicians would have far less need of the Haredi parties. To be ironic once again, mitsva goreret mitsva: one good deed brings others in its wake. Let us hope.

Liberman, like many others in this wild government, is not my cup of tea. But, pardon me, he’s doing God’s work here, and I hope he pulls it off.

About the Author
Shulamit S. Magnus is a professor of Jewish history, author of four books and numerous articles on Jewish modernity and the history of Jewish women, and winner of a National Jewish Book award and other prizes. She is a founder of women's group prayer at the Kotel and read Torah there in the first such service, in 1988. She is first-named plaintiff on a case before the Supreme Court of Israel asking enforcement of Jewish women's already-recognized right to read Torah at the Kotel, using scrolls held there. Her opinions have been published in the Forward, Tablet, EJewish Philanthropy, Moment, and the Jerusalem Post.
Related Topics
Related Posts
Comments
Advertisement