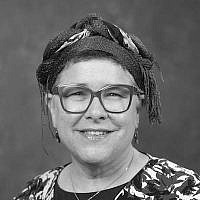 The Blogs
Susan Hornstein
Apply for a Blog
Advertisement
Please note that the posts on The Blogs are contributed by third parties. The opinions, facts and any media content in them are presented solely by the authors, and neither The Times of Israel nor its partners assume any responsibility for them. Please contact us in case of abuse. In case of abuse,
Report this post.

Parashat Vayera contains a pair of stories about Avraham and his sons. These stories are in adjacent chapters, and contain such strikingly similar language that the Torah seems to be begging us to compare and contrast them. In Bereishit Chapter 21, Sarah orders Avraham to expel Hagar and Ishmael from the house. Avraham objects, but God upholds Sarah’s command and Avraham dispatches his eldest son from the household. In Chapter 22, the Akedah story, God commanded Avraham to sacrifice Isaac, his only remaining son. Avraham follows God’s command, brings Isaac to the appointed place, and binds him to the altar.

The themes of the stories are the same: Avraham has to get rid of his son. In both stories, Avraham rises up early in the morning, behaving with the alacrity reserved for the performing of God’s mitzvot: וַיַּשְׁכֵּם אַבְרָהָם בַּבֹּקֶר. In both stories, the young man nearly dies until an angel of God calls out and saves him.  In the story of Ishmael the angel calls out to Hagar, urging her not to fear that God will kill Ishmael. While in the story of Isaac, the angel calls out to Avraham, stopping him from slaughtering Isaac. In both stories this angelic message is followed by a sort of revelation: God opens Hagar’s eyes, revealing the lifesaving well of water and Avraham lifts his eyes and sees the ram that he will substitute for Isaac’s sacrifice. At the end of both stories the boys survive. Indeed, everyone lives happily ever after.  Ishmael in Paran and Avraham in Be’er Sheva.  God bestows the blessing of numerous offspring on the boys at the end of both stories.

How do the stories of Ishmael’s expulsion and Isaac’s near sacrifice differ? In the story of Ishmael the expulsion is instigated by Sarah, who has her eye on Isaac’s status as inheritor of the covenant, and God approves Sarah’s plan. In the story of Isaac, God alone commands Avraham to sacrifice his son. To me the most glaring difference lies in the sentence:

Which matter was that, you ask? Sacrificing Isaac? No.  This sentence appears in the story of Ishmael, whose expulsion pained Avraham. Only after God assures him that Ishmael will survive, and even flourish, does Avraham rise up early in the morning and send Hagar and Ishmael away as he had been commanded. In Isaac’s story, God commands Avraham and Avraham immediately rises up early in the morning to fulfill God’s command; the Torah tells us of no retort, no question, no feelings at all. His son is in mortal danger.  God is requesting his life and Avraham — the same Avraham who argued at length in favor of the people of Sedom whom he didn’t even know — leaps at the opportunity. What could account for this?

I believe the difference lies in the two distinct roles that Avraham fulfills: Avraham the Family Father and Avraham the Covenantal Patriarch. Avraham’s only role with respect to Ishmael was that of a father. Avraham loved his son indeed — Ishmael was the first son to be born to him. God had made clear to Avraham that Ishmael would not inherit either his fortune or his dynasty. Avraham, then, may have had a legitimate fear for Ishmael’s life, understanding that sending the defenseless pair into the wilderness would be the death of them both.

On the other hand, Isaac was the heir to both Avraham’s fortune and the covenant of the founding of the Jewish people. Over and over again God blessed Avraham with the promise of numerous offspring, an everlasting covenant, and a land for his people to call their own. In Chapter 12, when God commands him to “Go” לֶךְ־לְך , he promises these things to Avraham’s offspring, using the word זרע, seed or offspring. In Chapter 13, when Avraham separates from Lot, his relative, God reassures him that his legacy is not in danger as a result, again using the word זרע. In Chapter 15, God promises again, disabusing Avraham of the idea that his servant Eliezer would be his inheritor. Here God explicitly states that the legacy will come from Avraham’s own offspring and again uses the word זרע. The same thing happens in Chapter 17, at Brit Milah.  Here God states clearly that Ishmael would not carry that legacy, though he would have a legacy of his own, but rather a son born of Sarah would go on to sire the Jewish people. When God assures Avraham in Chapter 21 that he should expel Ishmael, he clarifies that the word זרע refers exclusively to Isaac. And then, at the end of our story, after Isaac’s near-sacrifice, the promise is reiterated for a final time.

How could Avraham have been afraid for Isaac’s life? He already had five promises from God that Isaac would carry on his holy mission. Avraham, the Covenantal Patriarch, knew that the continuation of that role would flow to Isaac. Avraham, Isaac’s father, had no need to fear. His lack of emotion at the Akedah was not because he loved Isaac any less than Ishmael, but because the test was not about his role as a father, it was about his belief in God, his trust in God’s promises. It was about his role as the Patriarch of the nascent Jewish people.

About the Author
Susan Hornstein is an educator and a change-maker. Susan holds a BA from Brandeis University and a PhD in Cognitive Psychology from Brown University. Susan has a background in computer system design, Jewish education, and is the conductor of the Central Jersey chapter of HaZamir, The International Jewish Teen Choir. She has learned at Hebrew University, Michlelet Bruria and Yeshivat Har Etzion. Susan is a founder and gabbait of the Women’s Tefillah Group of Raritan Valley, where she works on education and inclusiveness. She serves on the board of her Modern Orthodox synagogue. Susan lives in Highland Park, New Jersey with her husband, and has three grown children, all working in Jewish education.
Related Topics
Related Posts
Comments