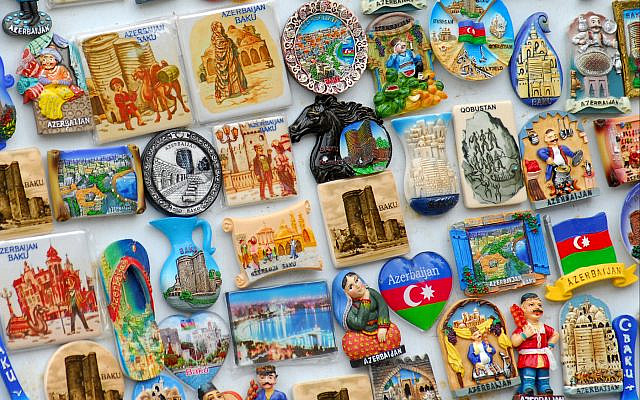 TEL AVIV — Azerbaijan, a Muslim-majority, oil-exporting republic along the Caspian Sea, hopes to strengthen its relations with Israel — and eventually establish an embassy in Tel Aviv.

Last week, a five-member delegation from Baku came to Israel. Among other things, the group, led by Fuad R. Muradov — chairman of Azerbaijan’s State Committee for Diaspora Affairs — met with leaders of the Azerbaijani Jewish community in Israel as well as local business and government officials.

“The diaspora isn’t only about nationality; it’s also thoughts and feelings,” Muradov told me during an interview at Tel Aviv’s Royal Beach Hotel on Sunday, the evening before his return flight to Baku. “Some members of our diaspora have never been in Azerbaijan and don’t speak the language, but others have strong affiliations there and we’re trying to get them back to Azerbaijan for various reasons.”

According to Muradov, Israel is home to about 70,000 people of Azerbaijani origin; the largest communities are in Tel Aviv, Haifa, Jerusalem and Akko. The two countries enjoy excellent diplomatic and trade relations; despite the fact that 89% of Azerbaijan’s 10 million people are Sunni Muslims, the former Soviet republic is staunchly pro-Israel and, in fact, is a major buyer of Israeli armaments. 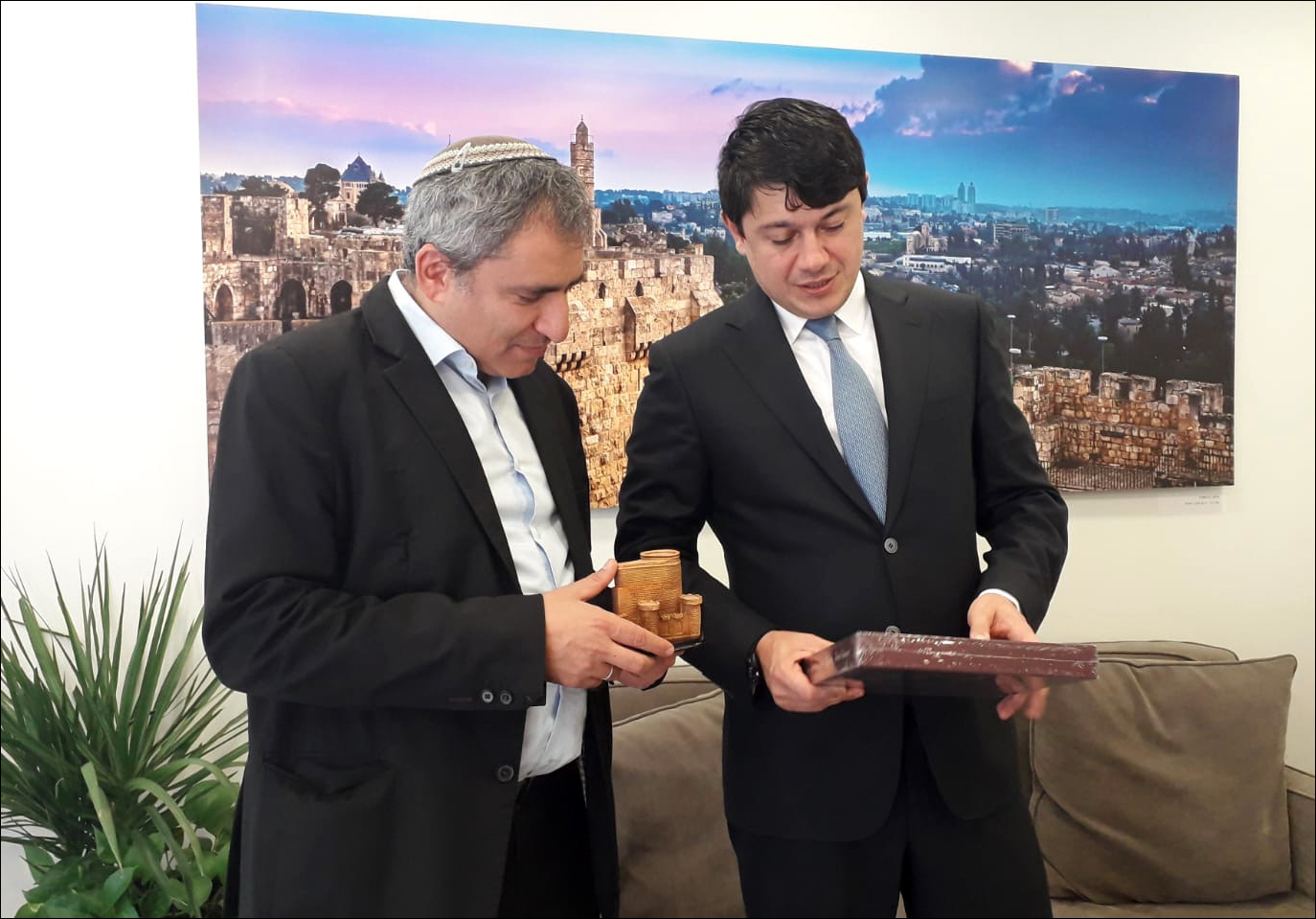 Last year, bilateral trade exceeded $1.3 billion, most of that oil. In fact, Israel is the country’s third-largest customer for petroleum after Italy and Turkey, buying 7% of all exports in 2018. Israel is also considering joining a branch of the $8.5 billion Trans-Anatolian Natural Gas Pipeline (TANAP), which was inaugurated in 2018 and already links Azerbaijan to Italy.

“The State of Israel has always supported our independence and territorial integrity,” he said. “We have very good economic and military cooperation. This year, we had 40,000 Israelis visiting Azerbaijan, with direct flights from Tel Aviv to Baku once a week, and we also have Israeli IT and energy companies working there.”

Muradov, 40, studied at the Azerbaijani State Oil Academy and has a master’s degree in environmental science. In 2001, he became chairman of the country’s largest non-governmental organization, the Azerbaijani National Youth Council, and four years later he was elected as a member of parliament.

Since starting his current job last year, Muradov has traveled to 17 countries with the goal of strengthening Azerbajan’s relations with the diaspora. This is Muradov’s sixth visit to Israel, but his first as a member of the president’s cabinet; previous visits were as a member of the Azerbajiani-Israeli Parliamentary Friendship Group. 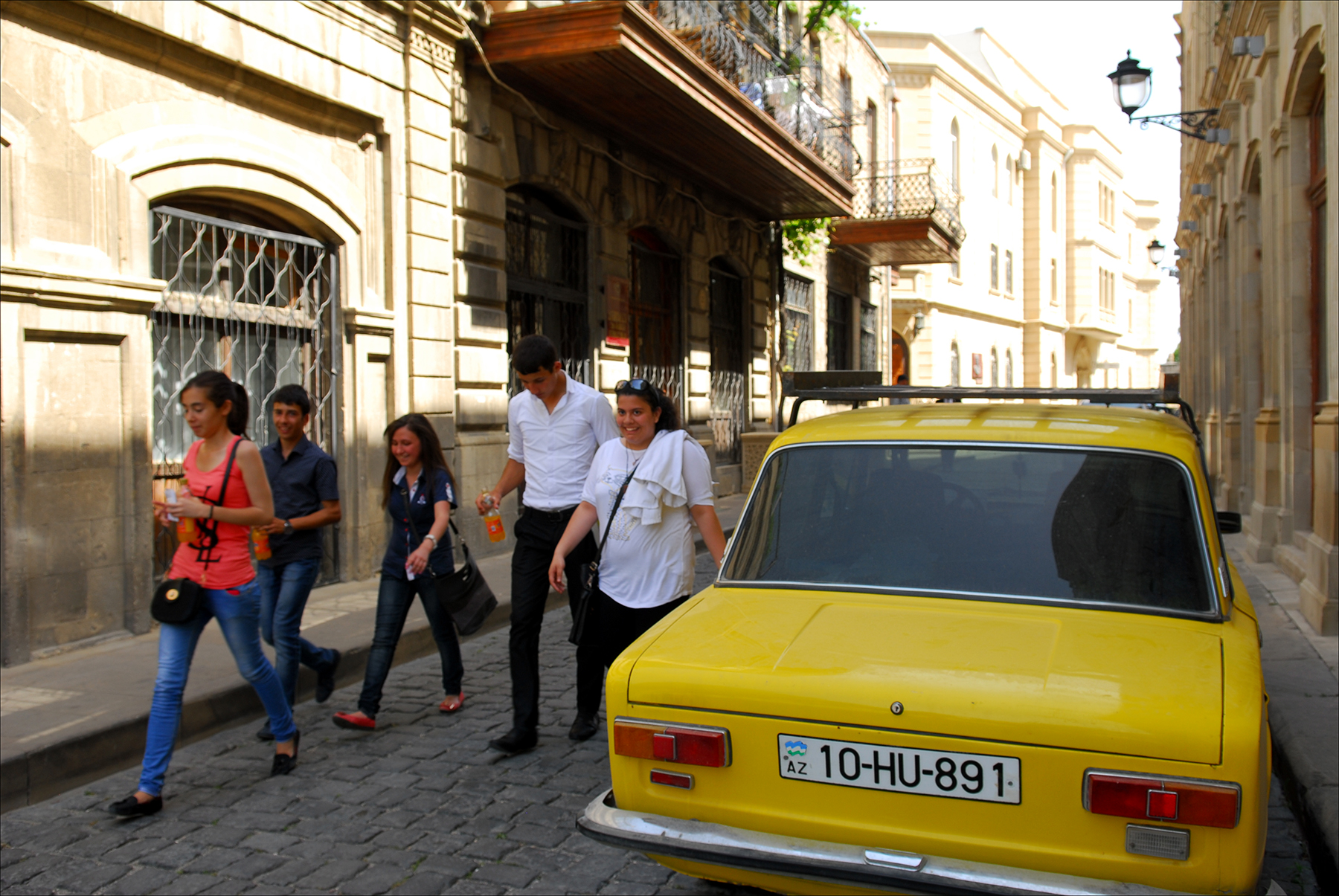 Young people walk along a narrow street in the old city of Baku, capital of Azerbaijan. (Larry Luxner)

Among those accompanying Muradov on his mission to Israel were committee officials Heydar Atayev, Salhat Abbasova, Elxan Samadov and Bronislava Hasanova. The group met a number of Israeli officials including Likud MK Ze’ev Elkin, who serves as Israel’s minister of environment as well as chairman of the Israel-Azerbaijan State Commission.

Muradov and his team also met with 100 or so Azerbaijani Jews in Akko, and attended a reception at the Dan Panorama for 200 people organized by Lev Spivak, general director of the Azerbaijan-Israel International Association (AZIZ).

Azerbaijan’s largest diaspora community is in Russia; some half a million Azerbaijanis live in Moscow alone. Other major overseas communities thrive in Germany, Italy and the United States (mainly New York, Boston, Houston and Philadelphia).

This effort to reach out to Azerbaijanis living abroad began in 2001, when President Heydar Aliyev — who ruled his country from 1993 until shortly before his death in 2003 — invited hundreds of emigrants to an event in Baku known as the World Assembly of Azerbaijan. Aliyev soon established the State Committee for Diaspora Affairs, which Muradov now heads. 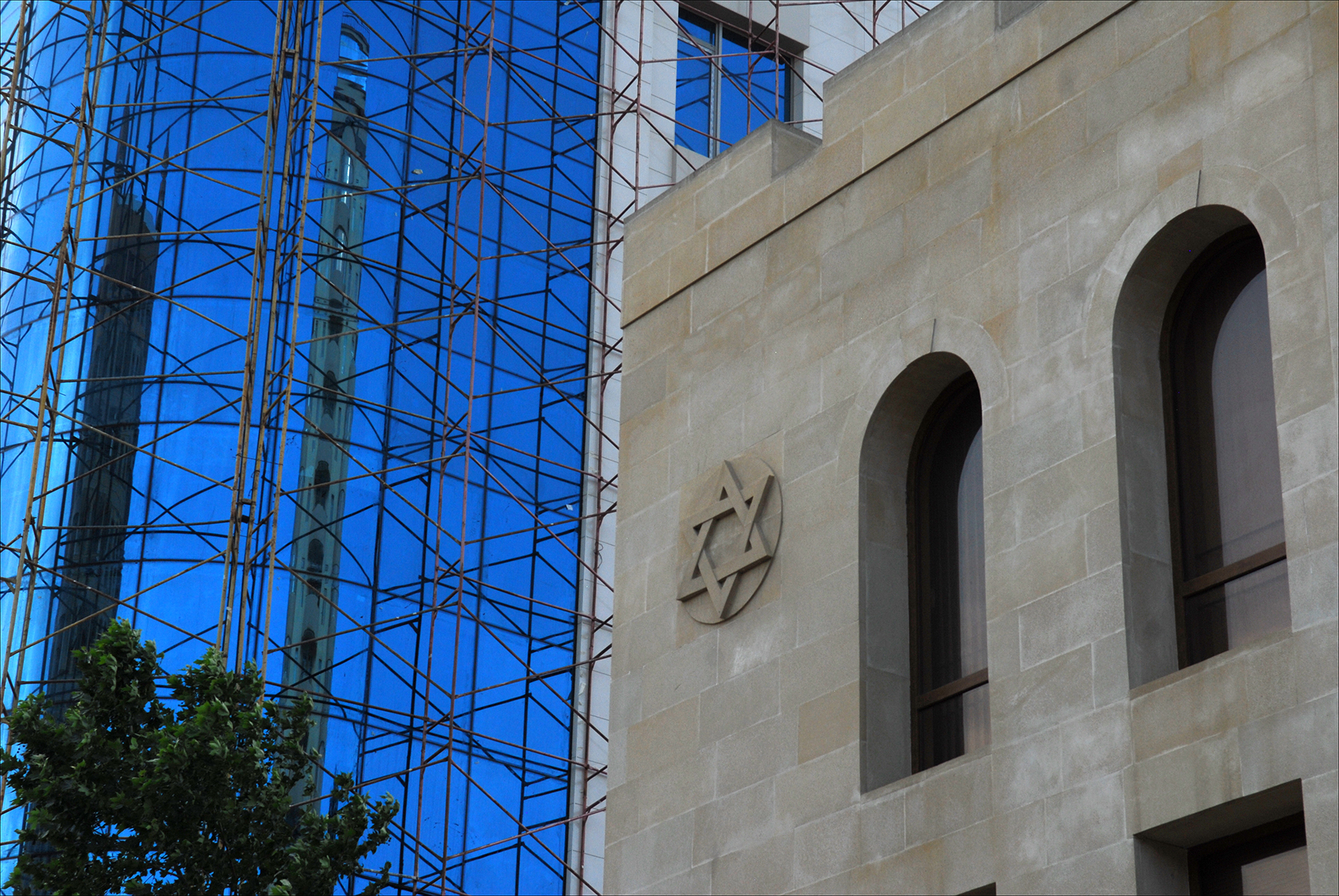 Georgian synagogue in Baku, home to many of Azerbaijan’s estimated 30,000 Jews. (Larry Luxner)

“Today we have Azerbaijanis living in 65 countries worldwide, though we don’t consider all of those living abroad as being part of the diaspora, because some of them are the original populations of those countries,” Muradov said. “For example, in Georgia we have whole villages of Azerbaijanis. There’s also a very large community living in Iran.”

The earliest wave of immigration came in 1918 — when Azerbaijan enjoyed a brief period of independence — then after the Soviet Union’s collapse in 1991, when the country went through economic and political instability.

One prominent Jew of Azerbaijani origin is Yosef Chagall, Israel’s ambassador to Belarus. Israel’s current ambassador to Azerbaijan is 35-year-old George Deek, an Eastern Orthodox Christian from Jaffa and the first Israeli Arab Christian ever to hold an ambassadorial rank.

Muradov’s office recently began promoting a sort of Azerbaijani “Birthright” program to encourage members of the country’s diaspora to “come back home” for a week. 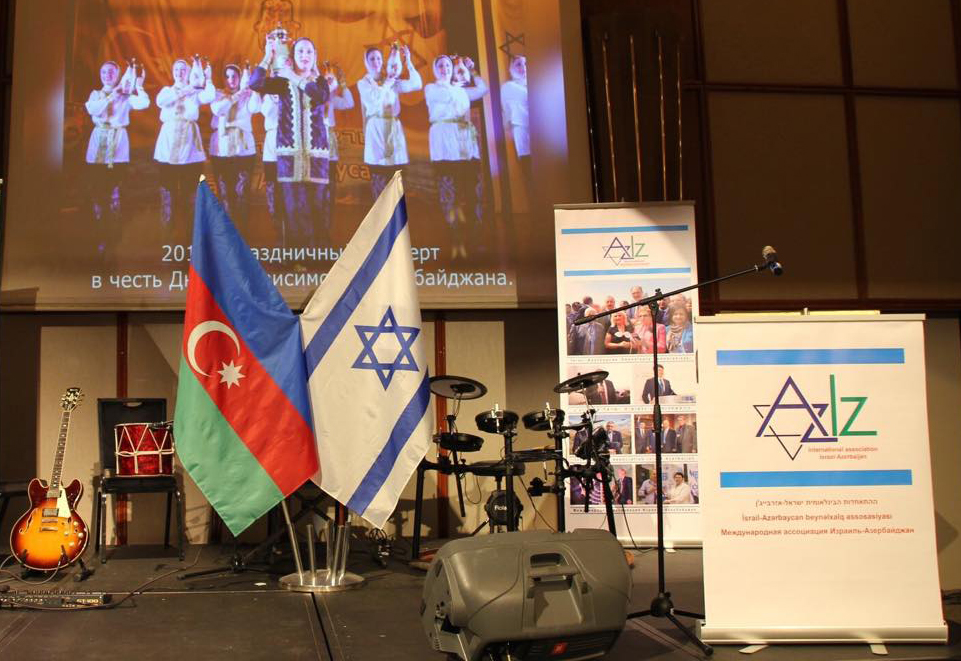 Flags of Azerbaijan and Israel decorate the podium during an reception at Tel Aviv’s Dan Panorama sponsored by the Azerbaijan-Israel International Association (AZIZ).

No embassy in Israel — yet

“It’s not the same as what you have here, because the idea of Birthright is that Jews living abroad will come to Israel,” he explained. “In our program, every year we do a summer camp for Azerbaijainis aged 18 to 30. We have 700 applicants for only 200 spaces. They stay one week in the mountains — at Shemakha and Sheki — where they learn about the Azerbaijani language, dancing and food. They meet with our soldiers who fought for independence and liberation of our territory.”

“The new generation is not as linked as their parents were,” he lamented. “The older people have memories of Azerbaijan and still have friends there. But the new generation was born outside Azerbaijan, and many of them don’t speak the language.” 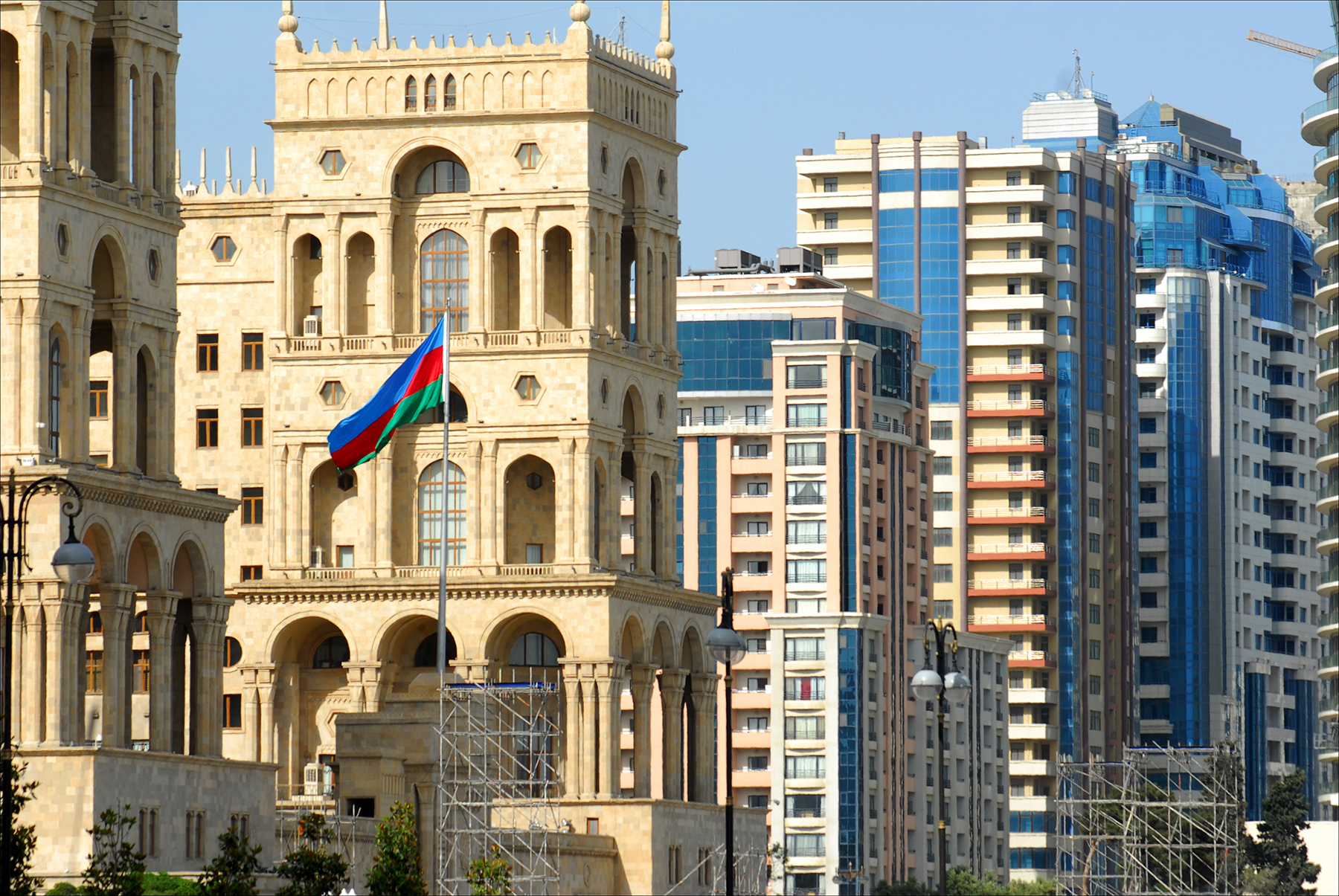 By the way, Azerbaijan doesn’t have an embassy in Israel, though that was one of the subjects under discussion during this visit. Muradov said the fact that neighboring Armenia — with which Azerbaijan fought a bloody war over the disputed territory of Nagorno-Karabakh — plans to open its own embassy in Tel Aviv later this year or in early 2020 “doesn’t concern us.”

What does concern Muradov is Armenia’s current efforts to convince Israel to officially recognize the Ottoman-era massacre of an estimated one million Armenians in 1915 as a genocide.

“We are explaining to people that this would harm relations,” he said, suggesting that it would be hypocritical for the Jewish state — or anyone else, for that matter — to recognize the tragedy as a genocide while ignoring the slaughter of 613 Azerbaijanis by Armenian troops in February 1992.

The bitter ethnic conflict over Nagorno-Karabakh began in 1988, when both countries were Soviet republics. It erupted into a full-scale war that continued until a 1994 ceasefire, yet tensions continue. As many as 230,000 Armenians from Azerbaijan and 800,000 Azerbaijanis from Armenia and Karabakh have been displaced as a result of the conflict, with subsequent outbreaks of violence in 2016 and 2017. 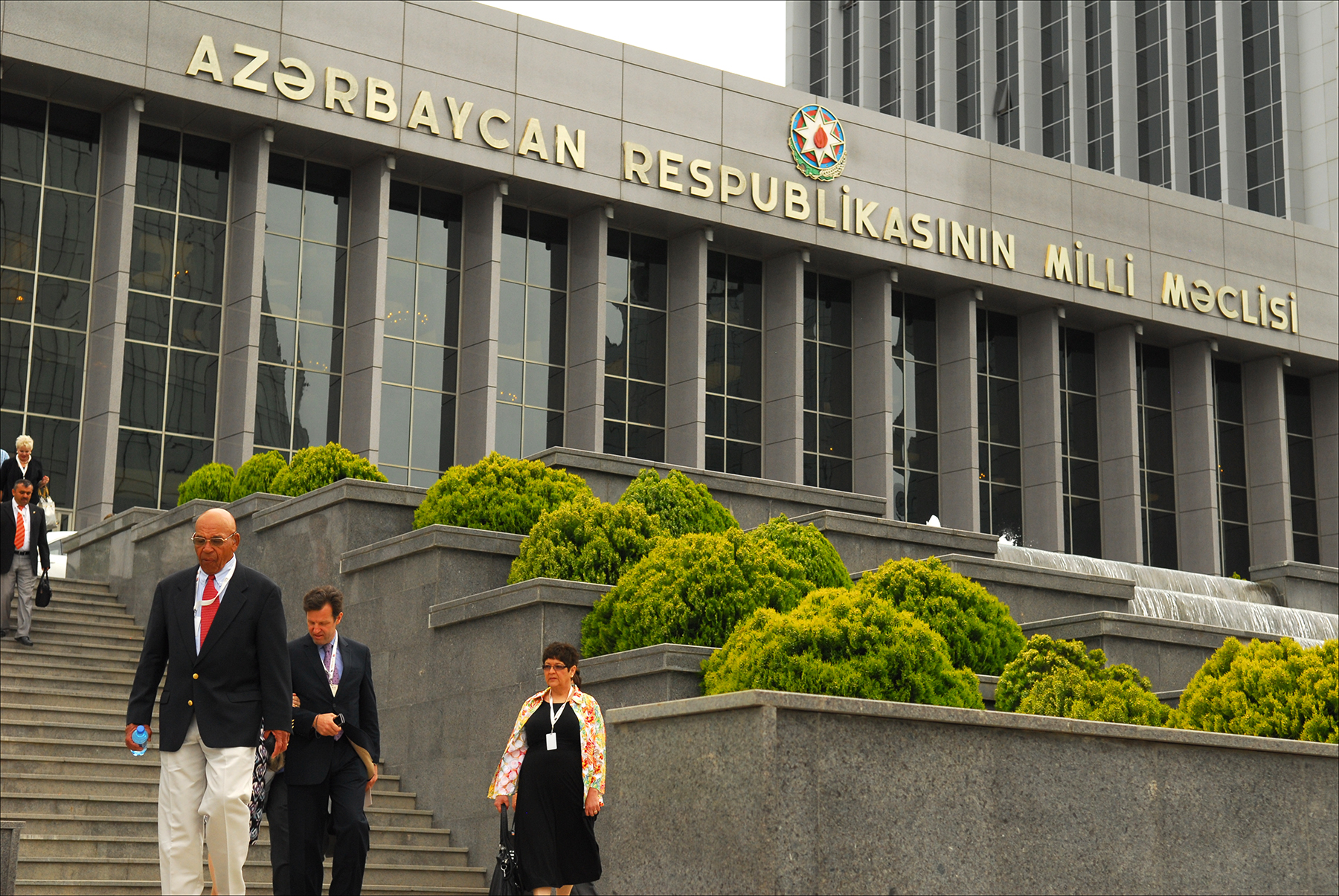 Israel, Turkey and Pakistan have all supplied weapons to Azerbaijan, while Armenia has received massive military assistance from Russia; as of this writing, no solution seems to be in sight.

“This is a big game of theirs. The Armenians want to put their [World War I] genocide on the same level as the Holocaust, this genocide which never happened,” Muradov claimed. “They’re saying our clash is based on religion — that it’s between Muslims and Christians — which of course is wrong, because Azerbaijan is a very modern, secular country.”

Muradov added: “We were the first Muslim nation to give women the right to vote and be elected. And we have an Armenian Orthodox church in Baku. However, all our mosques in occupied territory have been totally destroyed. Not a single Azerbaijani is living in Nagorno-Karabakh, which is about 20% of our territory.”