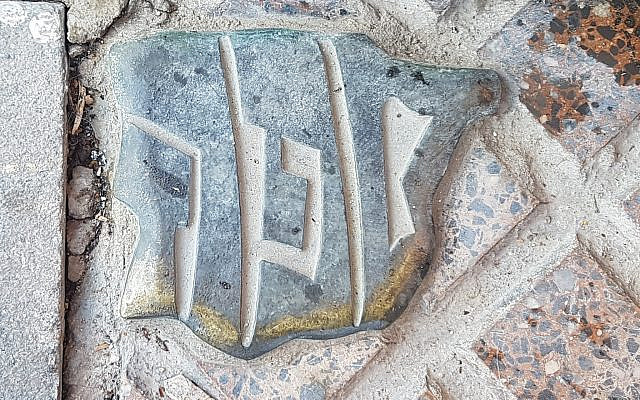 These bricks mark old Jewish areas all over Spain, put up by the Network of Spanish Jewish Quarters. It says "Sefarad" (Spanish Jews) in Hebrew. In the spaces, it says "Zachor" - Remember. (Source: the author)

I never really understood Chanukah until I went to Spain.

Standing in a church that had been a synagogue until the Jews were all either expelled or murdered, looking at the crucifix hanging where the ark had been, I understood the Maccabees in a whole new way. I understood the feeling that my sacred space had been desecrated. I understood the desire to tear out the image of someone else’s god and reclaim what had once belonged to my people.

I had this feeling in a lot of places in Spain. In many places, Spain seems to have barely gotten out of the Inquisition. Given that the Inquisition was not disbanded until 1834, perhaps this should not have surprised me.

This week’s report of an incredibly tasteless Holocaust-themed carnival float brings Spain’s problem into the news. A troupe of dancers – half dressed as Nazis and half as concentration camp inmates waving Israeli flags – followed a float bearing a menorah and two crematorium chimneys.[1]

Although antisemitic imagery has started to show up in parades across the globe,[2] the people who created the Spanish float apparently meant it as a commemoration of the Holocaust. The fact that this could pass anyone’s muster is a testament to how far Spain still has to go in educating their people about Jewish history, both their own and that of the rest of Europe.

In truth, though, I think this ridiculous float may be an indication of education that is beginning to happen, if not woke-ness. When I visited Spain earlier this year, I could see that a new awareness was slowly beginning to dawn across the country. Educational programs are beginning to appear in towns across Spain, designed to teach about Judaism as a living religion and about the history of the Jews.

My family and I are in Toledo, just south of Madrid. After admiring the beautiful, Moorish-style sanctuary of the old synagogue there, I enter the Museo Sefardí in back, opened in 1971 by royal decree. On my left is a display of pre-historic Canaanite artifacts, most of which have nothing to do with Jews. What an odd way to start, I think.

The museum continues with artifacts of Jewish life in Spain and elsewhere. It has a very strange feel, though, as if it is describing a dead culture rather than a living religion. There is no recognition that Jews still exist in the world. It feels like a museum to extinct peoples. This has to be one of the creepiest experiences of my life.

The biggest shock, though, comes at the end of the museum. Here I find artifacts from the Inquisition, presented as part of Spanish Jewish history with no obvious judgment. “Here was a culture,” the museum seems to say, “this is where it came from, this is how it manifested, and this is how we destroyed it.”

Somewhat shaken by this experience, we walk down the street to Toledo’s other former synagogue. This one is now a church. It is a pretty little church, but no sign of Jews remains. It leaves me feeling completely cold.

Two days later, we visit Segovia, two hours north of Toledo. Following the Sefarad bricks[3] that mark the old Jewish quarters all over Spain, we come to the Centro Didáctico de la Judería. This little museum and education center, built in 2014, is the complete opposite of the museum in Toledo. This is a museum to a living culture.

Display cases and wall signs talk about Jewish worship and ritual, describing customs and holidays. A holographic video shows Jews as they would have been praying in the old synagogue in town, describing the service in present tense, as what Jews still do.

Walking through the exhibit, I find myself impressed by their descriptions of the Jewish quarter and Jewish life here. Again, the biggest surprise comes near the end of the museum. I find a memorial plaque on the wall with a list of names of Jews who once lived in Segovia. At the bottom, the plaque says:

“Most of the houses of the medieval Jewish quarter are well preserved. We even know, in most cases, the name of the [people] who inhabited each house. The synagogues they built that remain to our days are devoted to other religions and purposes. However, this quarter will always be the testimony and memory of those who raised it up.”

Just down the street from the Centro Didáctico, there is another synagogue that is now a church. It is, in fact, very similar in style to the one in Toledo. In Segovia’s synagogue-turned-church, however, I discover that Toledo’s was not nearly as bad as I had thought.

Facing me as I walk in to the church/antique synagogue is a huge painting depicting stereotypically big-nosed Jews attempting to burn a communion wafer, which hovers above the pot. The Jews cower away from the “miracle” of their inability to destroy the holy wafer. This is the antisemitic story that the church used to steal the building from the Jews not long after it was built.

Confused, I look to the pamphlet I was handed as I entered, hoping for some explanation. The pamphlet begins, “According to the chroniclers, in 1410 an attempt of desecration in the Major Synagogue took place.” At first, I think they mean an attempt by the church to desecrate the synagogue. But, no, they are describing exactly the story depicted in the painting.

After all of that, having presented this story as if it could have been true, the pamphlet finally acknowledges that “the story is included [in the chronicles] with a clearly anti-semitic attitude.”

Reading this, I realize that the Toledo church/synagogue has actually take some significant steps in a positive direction. Not only are there no antisemitic tropes or artwork, they’ve actually removed most of the Christian symbology, partly returning the building to its Jewish roots.

In Cordoba, in the south of Spain, we take a Jewish tour from a wonderful guide, Jorge Gershon. Gershon is a Spanish Jew from Ceuta, a Spanish enclave in North Africa.

Coming through the gate of the oldest of Cordoba’s several Jewish quarters, Gershon points out a small display in the pillar room of the gate. It is an altar with a variety of Catholic symbols, nothing special in this very Catholic country. What makes this display different, Gershon tells us, is that it used to include a sculpture of a crucified child – a graphic visualization of the blood libel.[4] A group of interfaith activists, of which Gershon is a part, managed to convince the government of Cordoba to take the blood libel sculpture out of the display just last year.

Baby steps. Half baby steps. Quarter baby steps. Infinitesimal forward motion in a place where so much change is needed.

Encouraging small steps is crucial to making change, however. In an earlier career, I was trained as a marine biologist studying dolphins.[5] I spent a lot of time watching dolphins and their trainers in zoos and animal parks. When you train a dolphin to jump through a hoop, you do not start with the hoop in the air and try to convince the dolphin to jump through it. You start with the hoop in the water and reward the dolphin for simply approaching it. You then lead her to touch her nose to the hoop and reward her for that. Each small step gets you closer to the goal of having her jump through a hoop you are holding high in the air, to the amazement of the watching crowd. If you do not reward the small steps, however, you will never reach your goal.

Baby steps, even half and quarter baby steps, are still steps in the right direction. As tempting as it might be to rush in and push against the ridiculousness of the infinitesimal progress with all our might, we would do better to encourage the progress, as small and slow as it may seem.

Jorge Gershon is hopeful about the future of Jews in Spain. For the first time in 500 years, a community seder was held last year in Seville and more than 100 people attended. The Red de Juderias de Espana (Network of Spanish Jewish Quarters) has established Caminos de Sefarad (Walks of Sephardic Jews) in more than 20 cities across the country. The Network offers educational programs for local school children to learn about the Jews in their cities.

This educational effort may actually be responsible for the ridiculous float that in the carnival parade in central Spain this past week. The Spanish are beginning to be better educated about aspects of Jewish history like the Holocaust, so they want to acknowledge it. Education about Jewish history is a good thing. Clearly, we need to work on being “woke” about what sort of acknowledgement is appropriate.

They are taking the first small steps, and we should be encouraging them. Education is the first step – woke-ness will come.

[3] These bricks are put up by the Network of Spanish Jewish Quarters: https://redjuderias.org/

[4] The blood libel is an accusation that has been leveled against Jews in many countries that they murder Christians, especially Christian children, to use their blood for ritual purposes. It still comes up periodically. I have always found this a particularly ironic allegation as blood is not strictly kosher, and religious Jews go to almost ridiculous lengths to avoid consuming it.