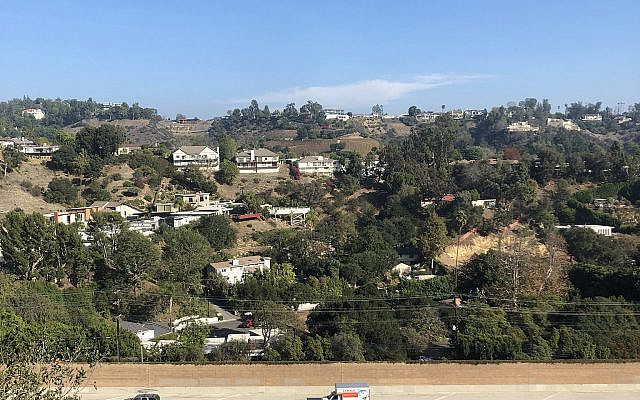 After two weeks in California, with all its delights and attractions, it is a relief to be back in the humble abode that is our home in Israel. In California everything, or almost everything, is large. Most of the homes we visited are grand, the people generous and hospitable, and the wide streets and huge stores provide an array of goods and facilities that keep the mind on constant alert for the next attractive bargain or delightful display.

Our visit coincided with the run-up to Christmas (only another month to go), so fairy lights and decorations were everywhere to be seen, and the eternal Christmas songs assailed our ears in every public space. There was no mention of Chanuka unless we were in the home of Jews or former Israelis. As far as the latter are concerned Chanuka consists of men and women reciting the blessing and lighting the menora together, in an egalitarian approach which I personally found refreshing, singing a few songs, whether the first verse of the traditional Maoz Tzur or songs remembered from their kindergarten days, followed by feasting on such traditional fare as latkes (potato pancakes) and doughnuts. In my Germanic family tradition such fattening items were eschewed, and our traditional Chanuka treat coincided with that common throughout Europe at Yuletide — gingerbread biscuits.

Part of the relief at being back home is that everything seems to be in proportion. Admittedly, in Israel we are short of space and our roads are narrower and shorter than those in California, but at least here the restricted dimensions oblige drivers to slow down and pay greater attention to what is happening around them. I never dared to take the wheel in California, finding the breadth, width and speed of the roads and the other vehicles too intimidating. One acquaintance there expressed amazement at my timidity, declaring that if I could drive in Israel I must be able to drive anywhere, but that was certainly not the case for me.

Big is beautiful, so the saying goes, and if that is true than California is certainly beautiful, with its huge expanses, mountains and terrific beaches and coastline. But Israel has all those things (except huge expanses), albeit on a smaller, more practical and more human scale (as well as a few other things besides). Far be it from me to denigrate the wonders and advantages of the New World, but it seems to me that the old world suits me better.