Let’s start with the facts: Chagall was born in 1887 in a Jewish ‘shtetl’ in… Belarus. NOT Russia at all. Admittedly, Belarus was, at the time, part of the Russian Empire. If that makes Chagall ‘Russian’ or ‘Russian born’, then I guess that Mahatma Gandhi (born in 1869 in what was then the British Empire) must be described as ‘British’ or ‘British-born’! 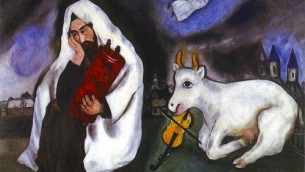 Was Chagall Jewish? Not according to the British Broadcastic Corporation…

Needless to say, Chagall’s genius transcends the boundaries of any nation; he belongs to the entire mankind.  But if any national identifier can ever be assigned to him, it can only be ‘Jewish’.  Chagall was born a Jew; he lived and died a Jew; in his native country, he was persecuted as a Jew; the Nazis mocked his ‘Jewish art’; and he barely escaped being ‘exterminated’ as a Jew. His work is full to the brim of Jewish motifs; his biographers call him “the quintessential Jewish artist of the twentieth century”. ‘Chagall’ is a variant of ‘Segal’, an ancient Jewish name traditionally associated with the tribe of Levi. 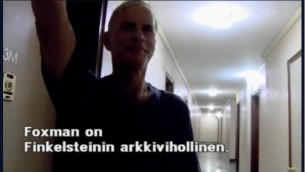 Norman Finkelstein demonstrating the Nazi salute for a Danish documentary

It’s not that the BBC always shirks from identifying someone as ‘Jewish’. In May 2012, the licence-funded media outlet interviewed Norman Finkelstein, describing him as ‘Jewish-American’. If I referred to Marc Chagall as a ‘famous painter’, I can only call Norman Finkelstein ‘infamous’. Among other things, in his book ‘The Holocaust Industry’, he claims that Jews (such as Elie Wiesel and others) exploit the memory of the Holocaust as an ‘ideological weapon’. If footballer Anelka recently performed an ‘inverse Nazi salute’, Finkelstein executed the real one, in front of cameras, just to show that he can! Like Chagall, Finkelstein was born a Jew (from parents born in Poland), has a Jewish name and lived in both France and USA; but any similarity decidedly stops there.  Finkelstein, who describes himself as “an old-fashioned Communist”, definitely does not live as a Jew; as for his work, if anything, it can be described as anti-Jewish.

Interestingly, here is how the British Broadcasting Corporation promotes its interview with Finkelstein:

American presidents have long been criticised for being too in thrall to the Jewish lobby. So what happens if American Jews fall out of love with Israel?

That’s what the Jewish American academic Norman Finkelstein claims is happening. He says they are now so unhappy with what Israel is doing that they want to distance themselves from the country.

No hint that ‘the Jewish lobby’ is an anti-Semitic invention, ‘Protocols of the Elders of Zion’ version 2.0. On the other hand, the BBC casts this one deranged individual in the role of spokesperson for the American Jewry!

Perhaps one of BBC’s many editorial committees, commissions, units, teams and boards would care to explain to Corporation’s owners (licence-payers like myself) by what logic it decided to describe Marc Chagall as ‘Russian’ and Norman Finkelstein as ‘Jewish’. What’s going on on your planet, BBC?? Because on this planet it seems rather obvious that Chagall was Jewish; while Finkelstein can at best be described as ‘Jewish-born’.