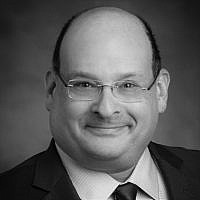 The Blogs
Ron Halber
Apply for a Blog
Please note that the posts on The Blogs are contributed by third parties. The opinions, facts and any media content in them are presented solely by the authors, and neither The Times of Israel nor its partners assume any responsibility for them. Please contact us in case of abuse. In case of abuse,
Report this post.

The international boycott, divestment and sanctions movement (BDS) against Israel, falsely cloaked under the banner of justice, is just the latest morally bankrupt, hate-filled and all-too-often anti-Semitic movement waged against Israel and the Jewish people.

BDS has attempted to position itself as a purely nonviolent movement that holds the moral high ground and that seeks to isolate Israel economically and diplomatically, misguidedly drawing its inspiration from the South Africa anti-apartheid movement.

But here is the bottom line. BDS will fail, miserably. It is its destiny.

History and context matter, but to BDS supporters those parameters are unnecessary. To BDS supporters, it is irrelevant that the West Bank came under Israeli control in a defensive war, or that Israel has signed peace agreements with Egypt and Jordan, given back the Sinai and unilaterally withdrawn from Lebanon and Gaza. Any evidence that Israel wants peace is dismissed. BDSers are blinded by their own rhetoric; when people are exposed to this hypocrisy, BDS loses its limited legitimacy and the power of its sloganeering.

Americans, in particular, widely understand the Middle East is complex and the BDS argument absurd. They can differentiate between a democratic nation that despite its imperfections has historically seized opportunities for peace and the bloodthirsty terrorism that has been perpetuated against Israeli citizens. Americans know that each of Israel’s peace offers has been refused.

In the New York April primary debate, no less than Hillary Clinton noted that there would have been a Palestinian state 15 years ago if Yasser Arafat had accepted former Prime Minister Ehud Barak’s offer. Just this month, Palestinian President Mahmoud Abbas reportedly turned down an offer to meet with Israeli Prime Minister Benjamin Netanyahu. But to BDS supporters these facts don’t matter, nor does any shred of evidence that challenges their notion of Israel as evil.

For decades Americans have consistently favored Israel over the Palestinians, and they will continue to do so — despite the rise of BDS rhetoric in some extremist elements of the Democratic Party. Americans understand that Israel historically has sought peace, and that it is Palestinian leaders by encouraging terrorism — whether actively or tacitly — and by repeatedly walking away from the negotiating table who have demonstrated that they are the stumbling blocks to any peace agreement. BDS does not hold the moral high ground.

Efforts to delegitimize Israel in the international arena are failing. Prime Minister Netanyahu’s recent trip to Africa signaled increasing cooperation on that continent, as Israel continues to widen the large number of nations with which it enjoys diplomatic relations.

Despite my confident prognosis of BDS’ defeat, we must fight it vigorously in all sectors of American civil society and abroad. On its face, BDS sounds like a reasonable force for good, pressuring Israel to make the peace that best serves its long-term interests; only when people are educated does it lose its claims to high ground. And these educational efforts, led by Israel and American Jewish organizations, must continue in all sectors of American society: religious denominations, academic, labor unions, and on the state and local level.

Yes, BDS may hurt some Israeli businesses, academics or scientists, but those effects won’t be long term and the impact on Israel’s economy is negligible. And, no, my confidence that BDS will fail doesn’t mean that we shouldn’t take the movement seriously. We must take it seriously and continue to battle it. It is a dangerous movement that cloaks itself in the aura of nonviolence while its ultimate goal is the end of Israel as a Jewish state.

BDS will fail because of the concerted fight against it. The Israeli government and international Jewish community have been ferocious in battling efforts to demonize and delegitimize Israel. We’ve fought it on campuses and in state legislators; we’ve fought it in Europe and in international bodies. We’ve fought it because most Israelis and most Jews, from left to right, believe in a two-state solution. BDS does nothing to encourage Palestinians activists to develop meaningful alliances within the Jewish community to advance their cause.

BDS will fail because despite the frequency with which some international bodies unfairly single out Israel for opprobrium, Israel maintains diplomatic relations with 158 countries — including Muslim states — representing the vast majority of the world’s nations. Despite BDS supporters’ attempts at ostracism, Israel remains a part of the family of nations, sought as a diplomatic and economic partner throughout the world.

BDS will fail because it already is. Legislation, resolutions and executive orders are being signed state by state prohibiting state agencies from contracting with or investing pension funds in companies that boycott Israel.

BDS betrays its anti-Semitic leanings by subjecting Israel to standards that it doesn’t subject to any other state, including those guilty of the most severe human rights violations. It will fail because people recognize that BDS is a modern-day form of anti-Semitism that seeks the end of Israel, not Israeli and Palestinian states living side by side in peace.

Eventually, when successful Israeli-Palestinian negotiations lead to a settlement, the BDS movement will be nothing more than an irrelevant historical footnote, whose enthusiasts will be shamefully remembered as contributors to a poisonous atmosphere that further delayed the arrival of peace.

BDS strategy is not the way to get there.