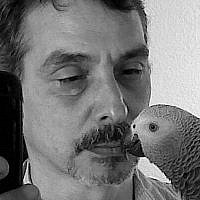 The Blogs
Jay Corwin
Apply for a Blog
Please note that the posts on The Blogs are contributed by third parties. The opinions, facts and any media content in them are presented solely by the authors, and neither The Times of Israel nor its partners assume any responsibility for them. Please contact us in case of abuse. In case of abuse,
Report this post.

BDS has a great following in Europe and among academic leftists in the United States. It is a political movement whose objective is to disenfranchise Israel. Meanwhile Arab Nationalists and their friends have been beavering away at artists, musicians and thinkers, urging them not to go to Israel. It is not unheard of for BDS supporters to send anonymous threats. At the same time professional BDS mythologists have been drawing false parallels between the Palestinian experience and the history of Native American people. It is at this juncture that I have to speak out and say “enough.”

One such piece I have read was written just over a year ago by Sa’ed Adel Atshan and published as an Op-Ed in the web journal Indian Country Today under the title “Palestinian Trail of Tears: Joy Harjo’s Missed Opportunity for Indigenous Solidarity.” Atshan was chiding Joy Harjo for not cancelling an invitation to be writer in residence at Tel Aviv University.

For those unaware of that part of history, the Trail of Tears is the name given to the forced removal of Cherokee, Chickasaw, Choctaw, Seminole and Muskogee Creek people from their autonomous homelands in the South Eastern United States under the Indian Removal Act of 1830. They were forced by soldiers to march to Oklahoma during which thousands died.

Atshan begins his piece on a sentimental note: “Ever since my childhood, I have always felt a deep connection with Native Americans. At the Ramallah Friends School, a Quaker institution established in Palestine over a century ago, we learned about our shared history as indigenous peoples who have faced ethnic cleansing by European colonists and the importance of nonviolent resistance for freedom and dignity.”

There are serious problems with the first paragraph. Qualifying Arabs as the indigenous people of the Levant is sketchy and denies that the region’s original people were Judeans, Samaritans, Phoenicians and other Canaanite people. Arabs only arrived in the 7th century AD. Atshan dishonestly portrays Jews as “European colonists” while it is a fact that there have always been Jews in what is now Israel, including the disputed territories. They have been joined over the last several centuries by diaspora Jews from Yemen, Egypt, Syria, and Iraq, from both ends of the Mediterranean and from Eastern Europe. No one could possibly mistake a Yemenite Jew for a European, and Atshan understands that very well.

And just how could Atshan feel a deep connection with people he had never seen or met? What he sympathized with was more likely a colonial abstraction from reality, packaged and marketed for mass consumption by Anglo-American dream spinners. Of course children are attracted to Rousseauist fantasies: they are pink dreams for minds unable to reason on a higher level. Atshan indulges in shameless well poisoning by accusing Jews of ethnic cleansing when he knows full well that the Arab invasions subjugated Jews, Persians, Egyptians and Berbers, forcing them to accept Islam or suffer consequences including death. What happened to all of Iran’s Zoroastrians, Atshan? Why are the Druze such good citizens of Israel? Isn’t it because they were oppressed by your Arab brothers? Did the Arab invaders suddenly become “indigenous” just a few years ago when everyone under the sun jumped on that band wagon?

Arabs are not like us. We don’t have a special seat at the United Nations, we don’t have billions given to us by the European Union and Arab states and we don’t have our own world-wide propaganda machine funded by oil rich Gulf States. We do not have perpetual “refugee” status with our own UN agency. What we do have is an authentic, legitimate indigenous claim to the land we live on, and that is also where we differ. Native American people have been present on the Americas for no less than ten thousand years. Arabs didn’t leave Saudi Arabia until the seventh century and their DNA isn’t unique enough for them to scream racism at Jews or anyone else in the region, and it’s simply a lie to say that they are the indigenous people of Israel. The authentic indigenous people of the West Bank are the Samaritans, not Arabs. Why are there so few Samaritans, Atshan? Is it because they jumped at the opportunity to convert or die? Isn’t it just a bit convenient not to mention them?

Joy Harjo is a well-known writer and artist who is Muskogee. Atshan’s mention of the Trail of Tears is a sacrilege and a deliberate insult, just as the common mantra of a few years ago about Gaza being the world’s largest concentration camp was an intentional insult. Joy Harjo is a prime example of someone whose freedom was impinged upon by BDS thugs.  How typical that people who cry victim loudest should be so eager to victimize someone and try to strong arm her into complicity. If I were her I would have ended a few friendships and stated “I go where I like, and my choices are my own, not yours.”

Atshan’s academic friends include J Kehaulani Kauanui, who despite the Hawaiian name looks European, and Steven Salaita, a Palestinian with a phD in English literature who has been trying desperately to draw parallels between Native Americans and Arab Nationalists. And it would seem they are collectively engaging in a campaign to hijack the voices of authentic indigenous people. True to form the ASA trio are at this moment in Beirut with their Wild West show in tow, performing at a conference at the American University.

Kauanui published pleas in Electronic Intifada to get Joy Harjo to cancel her trip to Tel Aviv, even as Harjo was en route. There is a lot of cheap drama in that action, but we will get to that later. One of the comments from an obvious BDS supporter reads as follows: “If you look at the rubbish she [Harjo] wrote on her blog today to excuse why she is going to perform you will realise that she is nothing less than a closet Zionist, and therefore not a person to be trusted with the sensitive task of selling human rights to the people of the Israeli state.”

I see the writer as an Englishman who has no understanding of history and no memory of English atrocities: it was ethnic Englishmen who forced Harjo’s family from their place of origin, marching them to Oklahoma. From afar this is all a comedy: a self-righteous Englishman and a white looking woman playing Liliuokalani attack a real Native American for not supporting their faux indigenous cause that itself looks like the first attempts at ethnic cleansing. It is the trisomy can-can performed by people grandstanding in the name of Human Rights while violating one after another of them. BDS is a toxic cesspool of envy and bitter resentment, not a logical, intelligent movement towards peaceful co-existence.

People like Kauanui, Salaita, and Atshan spread half-truths and hurl slogans. They abuse the formal education they have received while attacking Native Americans who disagree. They teach “Native American and Indigenous Studies” while trying to silence authentic voices such as Joy Harjo’s. Anti-Semitism is a European disease, and like good colonizers they are trying to spread it like smallpox to Native American communities.

Atshan tries to subjugate Joy Harjo, as if it were his right to tell her what she may and may not do: “Harjo crossed the picket line. She helped provide legitimacy to an institution that sits above the ethnically cleansed Palestinian village of Shaykh Muwannis while supporting the Israeli military occupation which is illegal under international law.”

That isn’t Joy Harjo’s picket line, it’s yours. She isn’t the little Indian Barbie doll you played with at the Quaker school in Ramallah, but a real person with freedom to make her own choices without having to take your opinion into consideration. Women in BDS land may not have any such rights, but Native America isn’t your country. Atshan ends his op-ed by stating: “Many activists have devoted countless hours in reaching out to Harjo on her Facebook page. So many of us have written respectfully as fans.” So many, and yet such poor results? How amusing that cultural outsiders, fakes, and propagandists scream out about colonization while hijacking university ethnic studies programmes and working to silence Native American voices.

About the Author
Jay Corwin was born in Wrangell, Alaska. He is a member of the Tlingit tribe, of the Eagle moiety and Kaayaashkeíditaan clan, enrolled in the Central Council of Tlingit and Haida Indian Tribes of Alaska, and an original shareholder of Sealaska Corporation. Phd (1995) in Spanish and Latin American literature from the Florida State university and author of works on various pieces of 20th century Latin American fiction. He is currently Head of the Spanish programme at the University of Cape Town.
Comments