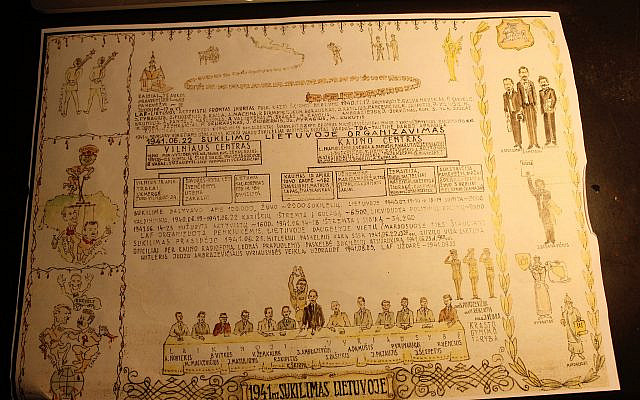 An illustration of the 5-day uprising in LIthuania against the Soviets, June 22, 1941

The 79th anniversary of Operation Barbarossa will soon be upon us. This is the code name Hitler used when he attacked Russia in 1941. It is also the same day Lithuania began its uprising against the Soviets, winning the country back from its ancient enemy.

So much to celebrate.

The beginning of summer–

As a child, in the 1960s, I had been told what a hero my grandfather Jonas Noreika was when he helped seize the country back from the Russian Communist monsters, how he led Žemaitija, the northwestern region of Lithuania, how he played a key role in masterminding the attack, all from a little schoolhouse in Mardosai where my grandmother taught. That town is just eight miles from Plungė.

I had been shown an illustration of the uprising by Damijonas Riaukia, a colleague of my grandfather who participated in the five-day uprising. He was the last living witness to these momentous events.

5-day uprising of Lithuanians against Communists

I’m not sure who drew the illustration. Was it Damijonas himself? Or did he color in the figures of a photocopy? There is no signature. But my grandfather’s name as leader is clearly in the little box of Žemaitija, with the cities of Šiauliai, Telšiai, Mažeikiai, Kretinga, Tauragė, and Raseiniai. Apparently the towns of Plungė and Mardosai were too small to be mentioned.

I had been informed that all this was accomplished in a mere five days—little Lithuanian David against the giant Russian Goliath. All from a one-room schoolhouse, a victory of Biblical proportions.

A story for the ages.

Worthy of a splendid party.

As I dug deeper while trying to figure out who my grandfather really was, I realized that I had been misinformed. The most important part of the story had been omitted. 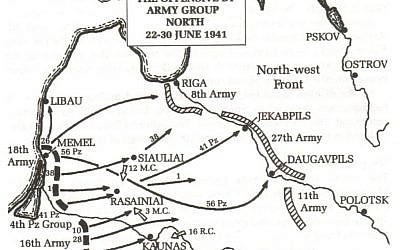 The part that had been ignored is that it was also the same day the Holocaust was launched in Lithuania.

As a teenager in the 1970s, I had been taught that Lithuania was considered the Jerusalem of Europe because it was so welcoming to Jews. In my Lithuanian school history class, I learned how Grand Duke Vytautas the Great declared Lithuania a safe harbor for Jews in 1388, opening the country’s arms and treating them as equals in a generous charter. Lithuanians were so kind to Jews, and Jews should be forever grateful.

But I had not heard that 95 percent of its Jews were murdered during WWII, the highest percentage of any country in Europe.

The version I grew up with was that Lithuanians were battered by the Russians and the Germans, while at the same time were doing all they could to help Jews, especially my grandfather because he was such a good man. So good that he was given the Cross of the Vytis, the highest honor anyone can be given posthumously. 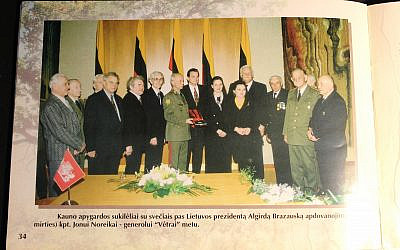 Mom receiving the Cross of Vytis from President Brazauskas in 1997; Source: MardosuKuopa.pdf

How could a country that was the most welcoming of Jews in Europe have the highest percentage of Jews killed in all of Europe?

Did the Nazis really do it all by themselves? While desperately seeking lebensraum in the rest of the world?

The Holocaust half of the story only surfaced in my late 30s when I probed the life of Jonas Noreika at the behest of my dying mother in the year 2000. Back then I knew little about battles, military operations, and other intrigues of WWII in Lithuania.

Although my parents sent me to Lithuanian school on Saturdays for about 10 years, I never once was educated on the Holocaust in Lithuania. In my American school, during the week, I had learned about the Holocaust in Germany and Poland, and had read The Diary of Anne Frank. It was as if Lithuania had been untouched by the Holocaust.

As I researched the Holocaust in Lithuania, I felt woefully ignorant, that it was a moral failing on my part to have completely missed this stunning fact about my heritage homeland. Perhaps I slept through a lesson in a Lithuanian school class?

But then I asked several of my other Lithuanian friends if they had heard anything about the Holocaust in Lithuanian school, and none of them ever had either. It was never taught in the 1970s. Could this have been deliberate?

That was when I wondered whether my generation’s ignorance of the Holocaust in Lithuania was a calculated strategy. Perhaps there were good reasons we were never taught about it?

For the past decade, I have been mulling over a few theories.

Ever so gradually, I connected that the Lithuanian five-day uprising against the Communists, which began on June 22, 1941, was also the exact same day of the beginning of the Holocaust in Lithuania. The fact that I had missed this link for so long disturbed me deeply.

Then it became personal when I considered my grandfather’s role. 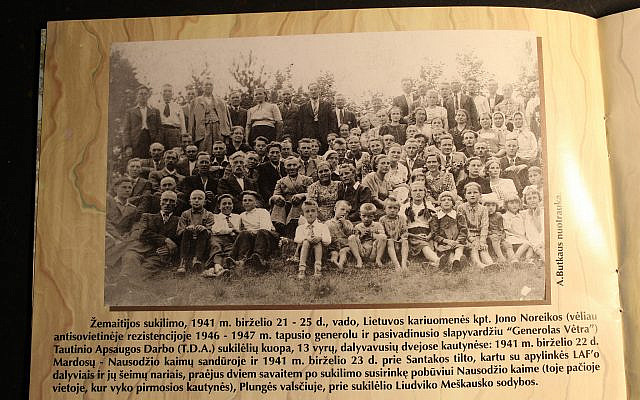 Group of party-goers in Plunge on July 26, 1941. My grandfather is in the third row, third from the right. My two-year-old mother is sitting with Teta Antanina, Noreika’s older sister, and my grandmother, his wife of five years. Source: MardosuKuopa.pdf

I had heard how my grandfather participated in a big celebration in Plungė on July 26, 1941, to celebrate how the Russians had retreated.  I had not heard that this huge party occurred two weeks after 2,000 innocent Jews were buried in 11 pits all around Plungė on July 12-13, 1941. The town only had 4,000 residents, and in one fell swoop, half the town had disappeared. The other half threw a party.

What exactly were they celebrating in Plungė?

My grandfather was the leader of about one-fourth of Lithuania during and after Operation Barbarossa. Under his watch, thousands of Jews were murdered from July to December 1941 in Žemaitija and Šiauliai County where he was appointed District Chief during the Nazi occupation. This preceded the January 1942 Wannsee Conference, when Nazi Germany decided to make mass-murder its state policy. Lithuania completed its Holocaust before Germany launched theirs.

Was Hitler inspired by what happened to Jews the previous six months in Lithuania?

When I asked about the coincidence between my grandfather being in charge of the uprising where so many Jews were slaughtered, I was told that he had no idea that they were being killed and that his men acted entirely independently.

So I had to ask whether it was possible that in Lithuania the soldiers did not take orders, that they could do whatever they wanted—including killing thousands of civilians–without any consequence? Could it be that massive numbers of innocent civilians were being murdered under their leader’s nose and Noreika was completely unaware?

Then I was told by the government that it was another Noreika who was in charge of Žemaitija during the 5-day uprising, and not my grandfather.

Ah, that explains everything! What a colossal relief. I was so worried.

For a brief moment, assuming it must be true and easily verifiable, I asked for proof. Strangely, no evidence could be produced of another Noreika in charge on June 22, 1941 in Plungė. 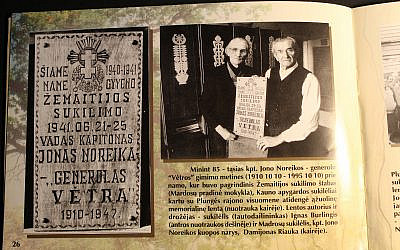 Yet, I have pictures of the Mardosai schoolhouse, stories from my grandmother of how she taught there and how my grandfather led the uprising there. Not to mention the countless hours of interviews with Damijonas Riaukia. Noreika was declared a hero, in part because of his role in the 5-day uprising.

So many contradictions to sort. It was a complicated time after all.

But what do I know? I have been told by the government, by Lithuanian “patriots,” and even family members that I am just a bewildered granddaughter, a spoiled woman raised in the United States who couldn’t possibly understand all the intricacies of war in Lithuania, and an untrained historian making flawed inquiries. 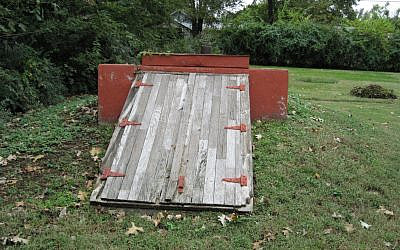 The Storm Door, portal to the life and times of Jonas Noreika, aka General Storm. Photo by Virginia Allain

Despite all my failings, even when told not to, but with excessive hesitation, like all imprudent protagonists in horror shows, I opened that creaky storm door to see the monster whom I thought I loved.

Slowly and dreadfully, my next wrong question arose.

How should I deal with the discovery that my grandfather, considered a magnificent legend in his homeland, has been used as a calculated heroic cover for the nation’s cooperation in Operation Barbarossa and the ensuing Holocaust to ethnically cleanse itself?

In related news, on May 22, 2020, Defending History published a list of books addressing this subject. Please go to “Books in the Current Debate” http://defendinghistory.com/category/books

Regnery History will release Tears of Discovery: How I Learned My Grandfather Was a Nazi War Criminal in May 2021; Harper Collins Mexico will release Mi Abuelo: El General Storm ¿Héroe o criminal nazi? in August 2020.