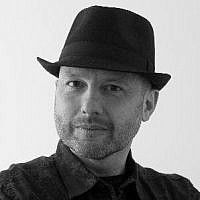 The Blogs
Bennett Arron
Apply for a Blog
Please note that the posts on The Blogs are contributed by third parties. The opinions, facts and any media content in them are presented solely by the authors, and neither The Times of Israel nor its partners assume any responsibility for them. Please contact us in case of abuse. In case of abuse,
Report this post.

I recently returned from giving performances of my new show, I’ve Never Told Anyone This, at a theatre in Amsterdam. I’ll be honest: shows I have performed in the past – for example, at the Radlett Centre last year, and my whole run at the Edinburgh Festival – sold out. This one in Amsterdam did not.

I was, of course, disappointed, especially as I had contacted the Jewish communities there to ask for their support. I couldn’t work out the reason. I know I may not be a household name – not even in my own household – but I have performed as a comedian on TV, presented two documentaries and written and starred in three radio series.

In addition, I’ve had lovely quotes from the press praising my work, including “Genuinely original and funny” from The Times and “A Welsh Seinfeld” from The Guardian. Yet this obviously made no difference.

Maybe I just had to accept the fact that no one wanted to see me. I was to find out that this was true, but not in the way I had assumed.  The promoter of the show informed me that mentioning I was Jewish had probably stopped people attending. Now while my ego was happy to accept this reason, I couldn’t actually believe it was true.

After the show, I spoke with some -audience members – Jewish and -non-Jewish – and asked what they thought about this reason for the lack of numbers. Some said non-Jews would not be interested in seeing a Jewish comedian “at the moment”, while others suggested “Jews might not feel comfortable” because of safety issues about going to a theatre where a Jewish comedian was advertised.

I was shocked. This was Amsterdam! Then, last month, there was the attack at a kosher restaurant in the city. And, of course, there were “Jews burn the best” chants by Dutch students last year. So maybe there was some truth in it.

It’s not the best of times to be a Jewish comedian. Especially one who mentions he’s Jewish within two minutes of being on stage. But although I have had a small number of anti-Semitic comments from audiences, most of the vitriol of late has been from other comedians, many of whom I have known for more than 15 years and considered friends – real ones, not just Facebook ones.

Over the past few weeks I’ve been told that referring to Jews as ‘Yids’ is not offensive and the Holocaust didn’t happen. Most of these comedians are loud supporters of Jeremy Corbyn. Most are also atheists, which is ironic, as their belief in their new leader is much stronger than that of most religious people I know.

It used to be that we as Jews feared only the far-right. It now seems we have to fear the far left, too. In the same way that Brexit gave racists a voice and the confidence to speak out loudly instead of hiding in the shadows, so it seems the Labour Party is giving confidence to the anti-Semites to come forward. And the more that it’s being allowed, the more it will continue.

So what should I do? Should I not mention I’m Jewish on stage or in my publicity so as to avoid repercussions or to ensure that people come to my shows?

I was bullied quite badly in school, so I vowed I would never bow down to bullies again. So no, I won’t stop. Too many people in the past have suffered to allow me to have a voice.

I don’t want to let them down.