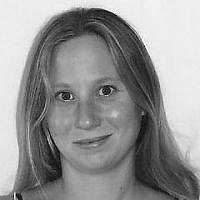 The Blogs
Safra Turner
Apply for a Blog
Please note that the posts on The Blogs are contributed by third parties. The opinions, facts and any media content in them are presented solely by the authors, and neither The Times of Israel nor its partners assume any responsibility for them. Please contact us in case of abuse. In case of abuse,
Report this post.

So there you have it. Anat Hoffman was arrested for singing the Shema at the Kotel.

It only makes sense. Anat is outspoken, she heads IRAC, lobbies Knesset and strongly supports pluralism in Israel.

Of course this woman would be arrested. She was breaking the law of silence…the woman sang. At the Kotel. How dare she?!

The example of Anat’s arrest de ja vu’d me back to the summer of 2011, when discrimination against women in public places became a big deal in the media. It is not that discrimination did not exist before, and clearly, it continues to this day. But that summer, the media was hungry, we were hungry, our country was in protest.

I thought of the little girls of Beit Shemesh, not the harassment while walking to school, but the lifelong scars imprinted upon them by those adult bullies. I remembered the boycott threats against stores employing women or with “immodest” dress codes. I remembered the bus passenger that went all out on a woman who refused to sit on the back of the bus and then went on to hold up the entire bus to get his way.

Then I considered the present. Anat Hoffman was arrested for praying out loud at the Kotel. Religious law does not allow for her female voice to be used in sing-song manner at our Kotel. It is grounds for arrest.

I almost skipped the article describing the incident. Another woman gets arrested at the Kotel, who cares? They should be respecting….wait, what?! THEY SHOULD BE RESPECTING? Something has clearly short circuited in my brain. This is not the way I think. Me, proud feminist mama, raised to know my worth and expected to accept no less. Me?

Then the pieces began to fall into some sort of grossly deformed puzzle. I’ve become so accustomed to institutionalized and religious discrimination that I have actually fallen prey to that same brainwash that I once stood so strongly against.

Shouldn’t those men who attacked those young schoolgirls be rotting in jail right now? They perpetrated violent acts against children, clearly with the intent to cause physical and emotional harm. Why is it legal to threaten businesses into firing women or changing their dress codes? Shouldn’t these perpetrators be put to justice? I am willing to bet that Mr. Obnoxious-bus-stopper-over-some-woman is still riding the public bus system.

I have gotten used to this legal discrimination, so much so that I have begun to question why it even matters that this woman got her sad self arrested. What is she fighting for anyways? Really, will she change the system?

I realized then, that this means I am also questioning why fight discrimination in the first place. As if it will change? Isn’t this just the reality of our societal structure and hierarchy? We live in Israel, both a religious and democratic state. Sometimes democracy needs to be compromised for the sake of religion and vice versa. Is this really necessary? Must this allow for the legality of gender-based discrimination and inequality?

I then understood why she fights. This woman is fighting the battle for those of us who can’t be bothered to do it for ourselves and for society. She is battling for equality in a country where even us women often consider just the opposite to be the norm.

I want to say that singing the Shema at the Kotel is not my battle, that it doesn’t affect me. Then I remember my own trips to the Kotel over the years, how my own spirit flies and I cannot help but sing. But I don’t. I can’t.

It is my battle. I had just forgotten that.

About the Author
Safra made aliya in 1997, and has been involved in the Jewish world both professionally and voluntarily throughout her life. She currently resides near Haifa and owns a small translation business. Safra is married and has one son.
Comments