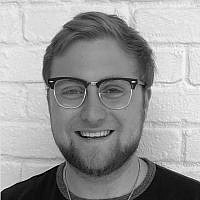 The Blogs
Max Webb
Apply for a Blog
Advertisement
Please note that the posts on The Blogs are contributed by third parties. The opinions, facts and any media content in them are presented solely by the authors, and neither The Times of Israel nor its partners assume any responsibility for them. Please contact us in case of abuse. In case of abuse,
Report this post.

The Lemon Tree by Sandy Tolan is the tale of two fates intertwined by chance and tragedy; a story rooted in the ideas of homeland and nationhood that cut to the heart of the Israeli-Palestinian conflict. The author follows the lives of Dalia Eshkanazi and Bashir Khairi, both occupants of the same home in Ramle, Israel / al-Ramla, Palestine. The home was built by Bashir’s father and inhabited by the Khairi family until 1948, when many Palestinians of al-Ramla were expelled from the country and became exiles and refugees upon the founding of Israel. Shortly after, Dalia and her family arrive as Jewish refugees from Bulgaria, looking for a safe haven. They end up living in Bashir’s house as refugees after the Holocaust, turning it into a home of their own. The Lemon Tree charts a course through history, following the histories of the Khairi and Eshkenazi families and highlighting the key moments that led Bashir and Dalia to meet. It then tracks both Bashir and Dalia as they grow into their identities, form a unique friendship, and challenge their biases and notions of homeland, all while providing timely historical analysis as we journey through time with our protagonists.

This book does many things well. In particular, this book is an excellent source to understand Palestinian history and identity. Of everything I have read, this story provides one of the most in-depth and detailed analyses of pre-state Palestinian life. A heavy emphasis is placed on the war of 1948, the Palestinian exile experience, and the right of return. Often in Western, liberal, Jewish circles, we place a heavy emphasis on the 1967 reality for Palestinians, that of occupation and Palestinian nationalism. While this reality is important to understand, the trauma of 1948 and the importance of the Palestinian right of return is crucial to the formation of Palestinian collective and political identities. The Lemon Tree lays out these ideas in a way that is easy to digest, detailed, and beautifully written. Reading this story, one can feel the longing that Palestinians feel for the homes, and better understand the trauma they have faced.

In addition to understanding important aspects of Palestinian identity, the author provides a very insightful view of regional politics, from the British Mandate era through the early 2000s. While reading the reader learns about Jewish and Arab cooperation before 1948, about Arab military tactics and thought patterns during the 1948 war, about life for Palestinians under Jordanian rule and disagreements the Palestinians had with a plethora of Arab governments. After 1967, this story highlights the rise of Palestinian national movements and resistance, disagreements between Palestinian factions, and the rise of Palestinian political leaders and organization, ranging from Fatah to Hamas to the PFLP and more. The key to all of this is that the author presents these historical developments from a uniquely Palestinian perspective. While reading, I felt like I understood why Palestinian individuals and political groups would make the decisions they did. It was as if I had a rare glimpse into the mind of a Palestinian, watching political developments and history unfold before my eyes in real time. So many American Jews today never learn history from this perspective, and I found it eye-opening and refreshing.

This is, however, the story of two peoples, two protagonists and two different perspectives. When reading the Jewish aspects of this book, I could feel the biases of the author shine through. The Lemon Tree does not do the Jewish story and Jewish relationship to the land of Israel justice. This isn’t to say there weren’t good or unique parts of the Jewish story in this book. For example, learning about the unique situation of Bulgarian Jews during the Holocaust was something I had never been exposed to before. Understanding the Bulgarian Jewish relationship to communism and Bulgarian Orthodox Christians, as well as the experience of the Bulgarian community settling in the very young State of Israel provided new insight into the motivations and challenges of Jewish immigrants in the 20th century. I also appreciated the author telling the stories of Jews who disagreed with action conducted by the State or IDF, stretching from the Mandate period through the second intifada.

Nevertheless, despite a few positive points, the Jewish side of this story is not fleshed out. While the author attempts to make a compelling case for Dalia’s connection to the land of Israel, the reader just doesn’t feel the same connection to Dalia as they do to Bashir. Dalia’s story is too closely tied to Europe, to the Holocaust. The indigenous nature of Zionism and the age-old Jewish longing for Zion that spans diverse Jewish communities across the globe is hardly emphasized. Additionally, while Arab and Palestinian leaders and political movements are fully developed, Israeli and Zionsit leaders are not treated in the same light. When discussing Yasser Arafat, the reader understands his motivations and rationale, even if they may disagree with his political moves. The same cannot be said about Jewish / Zionist leaders. The author specifically takes negative quotes from leaders like Shimon Peres, and plants them in the text to make him (and other leaders like him) seem less complex and morally flawed. Moreover, when describing scenes of violence, I can only recount one compelling story of violence against Jews that encourages the reader to feel sympathy for them. Other aspects of the tragedies that Jews faced are either exclusively tied to the Holocaust in Europe or attached to some caveat about the treatment of Palestinians. Finally, the story of both Dalia and Bashir differs immensely. While Dalia is forced to constantly reconcile with her identity, and demonstrates significant character growth and evolution of her ideas about Zionism and Israel. Meanwhile, Bashir remains steadfast in his opinions and, though he is able to form a meaningful relationship with Dalia, doesn’t show any serious personal growth.

The problem with The Lemon Tree is not that it is biased. Every piece of literature has its own biases, and not every story needs to be balanced. It is important to be able to read a story about Palestinian tragedy, perspective, and politics that allows you to understand it at a deep and personal level, without having to constantly include caveats about the Jewish experience. However, the critical flaw of this book is that the author sets it up to be a dual narrative, balanced piece, and presents every aspect of the story as pure historical fact. It does not acknowledge its biases and thus presents an analysis of this conflict that isn’t a whole truth.

At the end of the day, I would recommend this book to anyone who wants to learn more about the Israeli-Palestinian conflict, particularly Palestinian history and the Palestinian perspective to historical events. However, I would add a note addressed to two different communities:

To those reading this story who are more familiar with Palestinian history and traditionally fall into the “pro-Palestine camp”—please do not take this book as 100% fact. There is much more to learn about the Jewish experience in Europe, the wider Middle East, and the land of Israel. Zionism is much more complex than this story presents it to be. Jewish indigeneity to Israel is real and deeply rooted in the hearts and minds of global Jewry. Remember that this book does have its biases, and there are other great resources to read to better understand the Jewish side of this conflict. These are just a few stories of a century old conflict made up of diverse political and cultural communities.

To those readers who are Jewish, Zionist, or traditionally pro-Israel—this book is not always Israel-friendly, and that’s ok! The author beautifully highlights the Palestinian experience and explains Palestinian history and political development in a profound way. There is much to learn from this book and from understanding why Palestinians feel the way they do and why Palestinian organizations have acted in certain ways. Use this book as a learning opportunity. You will most likely feel uncomfortable. Sit with that feeling. Why are you uncomfortable? What are you learning that makes you feel this way? What biases of your own do you hold?

About the Author
Maxwell Webb is the IPF Atid National Organizing Fellow. Originally from Dallas, he graduated from The George Washington University with a BA in International Affairs with a dual concentration in Conflict Resolution and International Development as well as a regional focus on the Middle East and Horn of Africa. Max has previously served as an intern for the project on Arab-Israeli relations at the Washington Institute for Near East Policy, the diplomatic intern for the Kurdistan Regional Government representative office in DC, and a research aid at Reut in Tel Aviv.
Related Topics
Related Posts
Comments