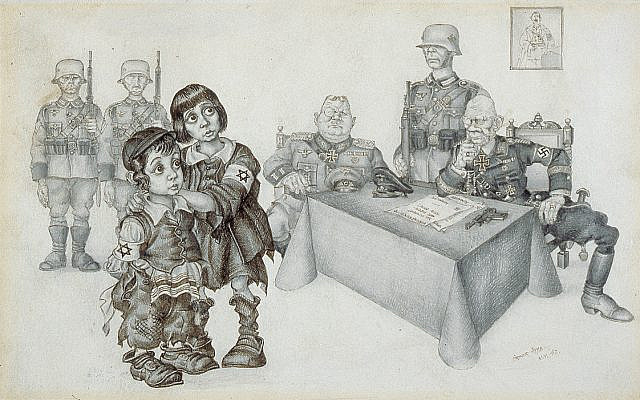 Szyk's efforts to expose the hideous nature of the Nazi "Final Solution," in which even innocent Jewish children who represented no military threat to German rule were condemned to die, is well reflected here. The drawing first appeared in the New York daily newspaper PM in 1943 and later on prints and fundraising stamps for Peter H. Bergson's Emergency Committee to Save the Jewish People of Europe. Date 1943 Source The Arthur Szyk Society, Burlingame, CA (www.szyk.org)

Way back in 2021, I remembered writing a satirical dialogue about Marjorie Taylor Greene giving options on how to handle a situation where a New Jersey school teacher needed discipline for the crime of racial stupidity.

That teacher asked her students to write an essay about a important person and his/her accomplishments.

One student picked, wrote about, praised and even dressed up as Adolf Hitler.

The 6th grade teacher then tacked the essay on the school bulletin board.

That teacher probably had heard the age-old adage: Nobody ever reads school bulletin boards.

But one parent did and that was enough.

That teacher resigned from her teaching position.

While I thought about the New Jersey incident, I asked myself four questions:

In this Trumpian age, what’s next?

Will any American teacher be able to top the New Jersey level of stupidity?

Are teachers or school staff required to pass a yearly mental health or bigotry or intelligence test?

Then lo and behold, a Washington, DC, library media specialist (librarian) raised the bar a couple of hundred inches.

Using the age-old teaching tool known as reenactment, she directed her 3rd graders to enact the following scenes from the Holocaust:

1.  Jews digging mass graves;
2.  Nazis shooting the Jews into their self-dug graves;
3.  Jews being transported in the cattle cars to concentration camps;
4.  Jews lying dead in gas chambers;
5.  Finally, a Jewish student was given the role of playing Adolf Hitler and told to simulate committing suicide. (It is not known if the librarian knew the student was Jewish.)

But this librarian was smart enough to know exactly what these watery-eyed, 9 or 10 year olds would ask next.

And she was prepared.

So when a student queried, “Why did the Nazis hate the Jews so much?”

I pictured the the librarian in a Grinch voice spewing out the words,

“because the Jews ruined Christmas.”

I wanted to know if there were any follow-up student questions.

But the media failed to find out.

Then the librarian followed a classic teaching concept:

Entrust your cringing and sniffling wards to keep their mouths shut by requesting their silence, “Please, don’t tell anyone about our little reenactments.”

Needless to say that technique failed, as it always does.

She had been convicted of theft.

She had her teaching license suspended for three years.

So what do we learn from this abhorrent story:

Not all librarians are nice or intelligent or non-racist, some are evil anti-Semites;

That we have no idea how crazy the next so-called educator will behave;

We can be assured that somehow or someway some crazy school employee will find a way to shock us.