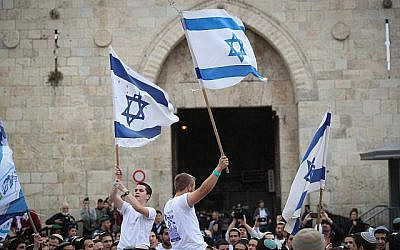 Illustrative: Thousands of Jewish marchers wave the Israeli flags as they celebrate Jerusalem Day by dancing through Damascus Gate on their way to the Western Wall in the Old City of Jerusalem, May 13, 2018. (Yonatan Sindel/Flash90)

Seldom does it happen that a word appears only one time in the entire Bible. It is even rarer for that word to disappear from Jewish sources, and then to resurface in a powerful historical context. That is exactly what happens in this week’s Parsha, coinciding with a fascinating historic anniversary.

Outlining a binary option, Parashat Bechukotai charts two paths for the Jewish people: we can either adhere to God commandments and relish in His abundance and blessings, live safely in the land of Israel, and be close to God. If the children of Israel choose the path of rebellion and violate God’s commandments, they will endure exile, famine, and spiritual distance from God.

When speaking of the rewards of following the ‘good’ path, the Torah spells out in detail the spiritual rewards of adhering to God’s commandments, just as it has outlined the physical rewards. We are told:

“And I will place My dwelling in your midst, and My Spirit will not reject you; I will walk among you and be your God, and you will be My people. I am the Lord, your God, Who took you out of the land of Egypt from being slaves to them, and I broke the pegs of your yoke and led you upright—Kommemiyut”. (Vayikra 26)

Commentaries (R. Dovid Hoffman and others) are quick to note that the word for upright “Kommemiyut,” is not mentioned anywhere else in the entire Tanach. So what does this word mean and what is it referring to.

There are two schools of thought among commentaries. The simple reading of the verse is that it is speaking about God leading the Jews out of Egypt in an upright way. This is the line taken by Rashi, Chizkuni, Rabbi Yosef Bechor Shor, and other commentaries lining it with the most simple and obvious meaning of the verse. God broke the yoke of Egyptian slavery and led us out of Egypt with pride and dignity.

However, other commentaries see this as a promise for the future, not a reflection on the past. The great Mishnaic Roman translator who has converted to Judaism during Rome’s worst oppression of Jews—Unkelus, translates the term differently. Unkelus sees it as talking about the future; he sees this as a promise for the liberty and pride into which God will bring Jews.

The Midrash (Lekach Tov cited by Aderet Eliyahu) here, does the same speaking of the uprightness of the Jewish people. The Midrash uses a parable to explain the meaning of this:

“This is comparable to a person who had a cow he used to use to plow his field, one day, he[the owner] lent his cow to another person who had ten children. That man let every one of his children plow with this cow one after the other until the cow was overworked and sat in its place. One the time came, all the cows headed back, and only this cow sat and would not move. No one was able to move it or appease the cow. Finally, the owner came, removed the yoke that was burdening the cow, and the cow began to walk. Similarly, the children of Israel in this world are persecuted by one nation after the other and the pain is immense. Soon, when the end of times come, God will not begin negotiating with the nations of the world saying: “why have you done this or that to my children?”. Rather, God will come and immediately break the yoke of oppression off of the children of Israel.”

In this view, God’s promise to lead us Kommemiyut­—upright, is a promise for a future bestowed on us in the future after a great deal of persecution and exile. It is a blessing that becomes possible only after many cursed years of pain and suffering.

It is no surprise then that Kommemiyut—another word for liberty and pride— did not appear in many Jewish texts through our thousands of years in exile. Interestingly, it came to the forefront of our conciseness in 1948.

As Israel prepared its declaration of independence, the word appears in its very first paragraph:

This blessing is one that can only be felt, after feeling the persecution of so many years. Like that overburdened cow, it can only feel its shackles broken and yoke removed after being overworked by ten different entities. This feeling clearly strongly resonated

It is not surprising then, that a few months later, in September 1948, when the Chief Rabbis of Israel, Rabbi Herzog and Rabbi Uziel, sitting down to write a formal prayer for the wellbeing of the State of Israel, chose to include this same term— Kommemiyut—denoting uprightness and national pride, in their prayer:

“Remember our brethren, the whole house of Yisra’el,

in all the lands of their dispersion.

Bring them speedily and with pride— Kommemiyut—to Zion your city,

and to Jerusalem, the place of your name’s dwelling…”

A word that had been sleeping for too long, had suddenly come to life—to the center stage of Jewish life. Walking freely and upright had once again become a possibility for the Jewish people. Were there no periods when Jews did live upright even during our two thousand years of exile? Of course, there were. However, as Rabbi Naftali Tzvi Yehuda Berlin(1816-1893), also known as the Netziv, points out, this verse is a matter of outlook. Just like that cow, who knows it can always be forced down, as long as that yoke is on her, the Jewish people knew that as long as they are in exile, they can always be oppressed again. As long as the Jewish people are sinning and living in exile, they know that they can, in a minute’s notice, be put down once again. God’s promise here is that there will come a day where there will be no yoke on you at all; there will be a time you will not consider the possibility of oppression and persecution since the yoke will be off, you will walk with pride and dignity wherever you are.

While Judaism shuns arrogance, haughtiness, and personal pride, it sees our pride as a nation as a virtuous matter. Be it the way we left Egypt, or the promised rewards of the days to come, God tells us that walking fearlessly with our heads up, proud of our Judaism, is a blessing and something to look forward to. It is no wonder then that the word for national pride— Kommemiyut—which is mentioned only once in the entire Tanach, came to life in 1948’s both in Israel’s declaration of independence and prayer for the wellbeing of the State of Israel. As we often see the challenges of our generation and difficulties in Israel, let us remind ourselves that we have seen the blessings of living as proud Jews— Kommemiyut— in our generation. Let us do all that we can to keep and expand that blessing and follow the instructions of “Im Bechukotai”, walking in God’s path. Shabbat Shalom!