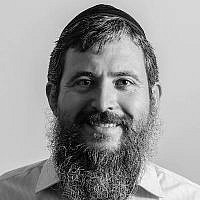 The Blogs
Yehuda Stern
Apply for a Blog
Please note that the posts on The Blogs are contributed by third parties. The opinions, facts and any media content in them are presented solely by the authors, and neither The Times of Israel nor its partners assume any responsibility for them. Please contact us in case of abuse. In case of abuse,
Report this post.

South Africa is recovering from what some have called ‘the biggest challenge to its democracy since 1994’ when the country transitioned from being an apartheid state. Civil unrest, roadblocks, and looting of shops and malls, which began as a result of the arrest of the country’s former President, brought several provinces in the country to a standstill as people were forced to stay home rather than go to work. Last week’s chaos has settled, thank G-d, and now it is time to reflect, rebuild and reunite as a country.

“Just as their faces are different from one another, so too their understandings are different, for each one has a different understanding,” teach the Sages of the Talmud. It is certainly not G-d’s intention that all people should think the same. This would make the world a very boring place. He specifically created us in such a way that we think differently to each other, whether it is politically, religiously, or in any other area of the life. However, it is also G-d’s will that despite not thinking the same, humankind should live together and build together.

The Mitzvah of Tefillin features in the first paragraph of the Shema. “And you shall bind them as a sign on your hand and they shall be as frontals on your forehead,” says the verse from this week’s Torah portion. While we have two similar looking boxes of the Tefillin, one for the head and one for the arm, they are in fact quite different. The head-Tefillin has four separate compartments into which four different pieces of parchment are inserted, each with a different passage from the Torah inscribed on it. The arm-Tefillin, however, has only one compartment. The four Torah passages are written on one long piece of parchment, which is then rolled up and inserted into this compartment. The obvious question is, why the difference?

The head-Tefillin represents the mind and intellect; our belief systems, religious ideologies and political opinions. By instructing us to have four different compartments in the head-Tefillin, G-d is teaching us that debate and diverse views are part of the Divine plan. The Mishnah and Talmud are filled with disagreements among the Sages. We should not be disheartened when we do not all agree. On the contrary, our diverse views complement one another and actually bring out the best in each of us.

It was not G-d’s plan that we should riot and rebel because we disagree with each other, but rather to live in unity and to work together as a united nation. The arm-Tefillin has only one compartment, and it is placed on the bicep opposite the heart and then strapped around the arm. When it comes to our heart, there is no room for conflict. We need to love and respect each other. And when it comes to our actions, we must build together. Building our communities – with schools for our children, Shuls and places of worship and businesses to support our families – is our joint responsibility, no matter our ideology or belief system.

Let us learn from the rainbow, and from the Mitzvah of Tefillin. Let us learn how to love and how to live-with one another, while retaining our unique identity; whether in religion, philosophy, or politics. By working together, we can build a beautiful community, country, and world.

About the Author
Rabbi Yehuda Stern lives in Johannesburg South Africa, with his wife Estee and their 6 children. He is the Rabbi of the Sydenham Shul, and director of Young Jewish Joburg which caters to Jewish students and young professionals. Rabbi Stern is a passionate teacher who enjoys sharing the Jewish perspective on modern and contemporary issues.
Related Topics
Related Posts
Comments