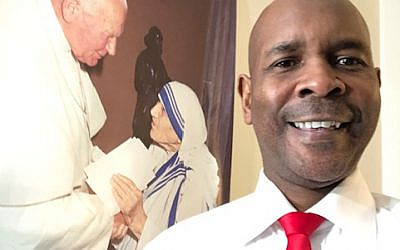 Barack Obama Mandela, who wants to become a Catholic saint, with a photo of Pope John Paul II and Mother Teresa.

At the end of my life on Earth, I want to become a saint in the Roman Catholic Church.

My journey began when Father Nathan Castle baptized and confirmed me into the church during Easter Vigil in 1994 at Saint Andrew Newman Center in Riverside, California while I was a university student. As I joined the church, I received the Christian name “Mary” due to my powerful connection with the Virgin Mary.

Inspired by a deep faith in Jesus of Nazareth and the Holy Spirit, I completed courses in the Rite of Christian Initiation as an Adult (RCIA) while simultaneously studying political science at the University of California, Riverside.

During my university career, I experienced powerful visions of Jesus and the Virgin Mary while living in my college dormitory.

In 1989, while living in the UC Riverside dormitories, I experienced three visions of Jesus Christ in my room. I saw a vision of Jesus, who appeared in the form of an African American, hovering near the ceiling of my room.

“Follow me into the light of the Holy Spirit,” the spiritual image of Jesus said to me.

I reached my hands towards the image of Jesus as tears streamed down my face. I felt a powerful, spiritual connection to the divine being.

Although I was raised by a strong Christian maternal grandmother in a God-centered church, I converted to Reform Judaism in 1995 and Orthodox Judaism in 1997. In 1996, I became a citizen of the State of Israel. From 2000-2002, I was a soldier in the Israel Defense Forces (IDF).

While I served honorably in the Israeli military, I never injured or harmed a Palestinian Arab. In fact, I always treated the Palestinians with respect for their human rights. While working check points, I sincerely respected the Palestinian Arab community. Although I was a soldier during war, my heart was filled with love, peace, and mercy.

In recognition of my past baptism and confirmation into the Catholic Church, I recently wrote a letter to Pope Francis asking that Dr. Martin Luther King Jr. be declared an “honorary saint” in the Catholic Church. Dr. King was a Christian civil rights leader who maintained a powerful faith in God and a strong devotion to Christianity.

I also hope President Nelson Mandela will become an “honorary saint” in the Catholic Church in recognition of his strong support for equality, human rights, mercy, and fairness.

As a member of both the Jewish community and Catholic community, I hope to build a bridge of communication between the Jewish world and the Christian world. Jesus of Nazareth, the founder of Christianity, was a compassionate Jewish leader. Moreover, the Virgin Mary was a Jewish woman known as “Miriam ha-Betulah”. Therefore, Christianity has strong roots in Judaism.

I urge the State of Israel to launch a new effort called “The Israel-Christianity Engagement Campaign” designed to build stronger relationships with the Christian world. In addition, I urge the Israeli prime minister and foreign minister to visit the Vatican and Christian churches around the world.

Christians and Jewish people are brothers and sisters in a common struggle against violence, war, poverty, and evil. By standing together, no one stands alone.