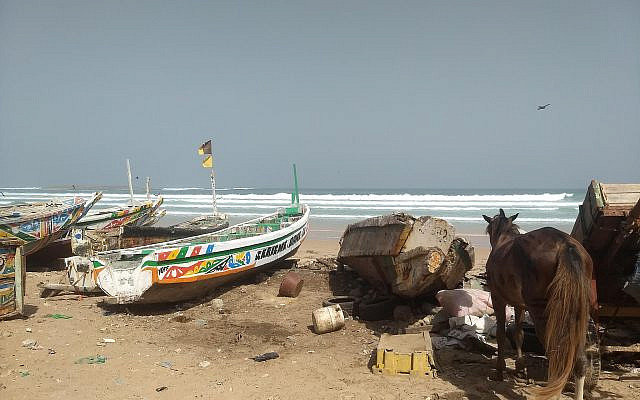 A beach with fishing boats in Dakar, Senegal

We have just completed our first month living in Dakar and are finally feel settled in our new lives here. One of the strange things about moving to a new city is how quickly things that at first seemed amazing become normal and routine.

I find myself walking past horse-drawn carriages every day without thinking much about how unique that is. I have grown used to the chicken running around outside of my son’s daycare. Even the honks of the multi-colored buses crammed with people have become mundane. 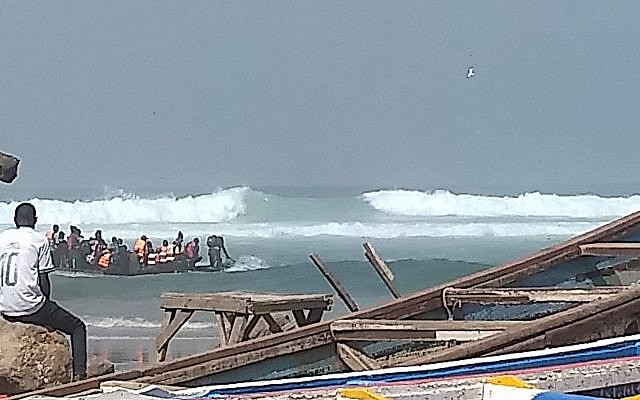 Fishermen head out in rough waters. I was told that they had to risk going out in dangerous conditions because they were running out of money.

On the one hand, this is clearly a good thing. It means that we feel at home here, more settled and less overwhelmed. On our first week here we were so overwhelmed by the intensity of the street life that we barely left our house. Even a few minutes spent in the hustle and bustle of the street was a sensory overload. Now, I have reverted to my old ways of walking around town and blocking out the distractions of the street life, as if I were in Jerusalem or New York City. On the flip side, I feel sad that I am no longer as amazed by these unique and fantastic sights. I am excited for the opportunity to see the city through the eyes of tourists when my family comes to visit next week.

There is however one thing that I don’t think I will become used to seeing, and hope never to be desensitized to: the poverty of everyday life here in Dakar.

We live in one of the most affluent neighborhoods in Dakar. Nevertheless, within a five minute walk from our house there are people living in tin huts, beggars on the street who are missing limbs and kids no older than our children begging for money.

It is truly heartbreaking to see barefooted children in ragged clothing approach us day after day to ask for money. Of course we try to give money as often as we can, but it would be impossible to give money to everyone who asks.

Our four year old son is quick to point out people who look different. “Why doesn’t he have a leg, Abba?” “What happened to her teeth?” We use these moments as opportunities to teach about poverty and how lucky we are to have access to food, shelter, education and medical care. 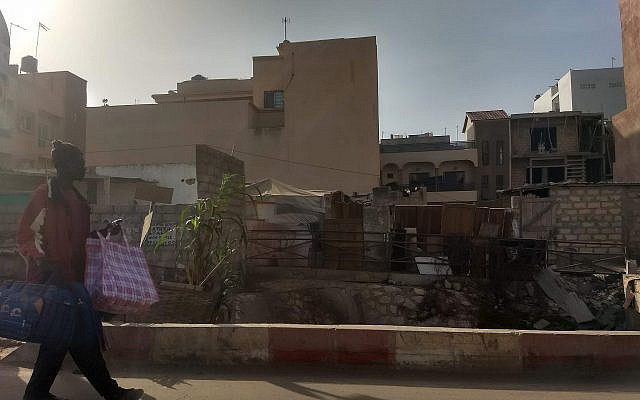 Shacks and huts made out of scrap metal next to apartment buildings in Dakar, Senegal.

But the truth is impossible to explain to a 4-year-old. The truth is that there is a deep injustice here. By pure fate these children were born into lives of poverty in Africa, while our children have privileged well-educated parents. Why does God make the world like this? I don’t know, and I cannot really explain it to myself, let alone to our children.

While I hope not to become desensitized to this poverty, I know that it is human nature for these people to also become part of the background as we continue to live here. I already anticipate where and when the local children will ask for money; and am slightly less shocked every time I see a man missing a leg begging for money.

I think that this is why one of the most fundamental Jewish teachings is the belief that the world is constantly being created and re-created. Every morning in our prayers we reaffirm our belief that God ‘renews good in the world every single day.’ That is to say that every day is a new opportunity to experience life and the world anew. We try to never become desensitized to the beauty of the world nor to become cynical about injustice and challenges.

I think this is particularly true at this point in the year in the thick of the winter. We have the fewest hours of sunlight that we have all year (though, here in Dakar we still have sunlight until 6:30 every evening!) and life tends to become a bit more tedious.

This leads me to one of my favorite comments on the entire Bible, which happens to be in this week’s Torah portion.

In the beginning of this week’s Parsha, the Rashbam, Rabbi Samuel Ben Meir, who was the grandson of Rashi (Rabbi Shlomi Yitzchaki, arguably the most significant rabbi in Jewish history) tells us an amazing story. He writes that his grandfather, Rashi confessed to him that if he had time, he would write new commentaries on the Torah based on the “plain meanings that renew each day.” (Rashbam Genesis 37:2)

What does it mean for the text of the Bible to renew itself each day? I think it means that Rashi was open to new understandings of the Bible, even though he had read it many times before. This actually represents a fundamental Jewish belief about Torah study: That the Torah is constantly relevant to our lives and that new meanings and interpretations are always present and possible.

This is not just a method of reading our sacred books, but actually part of a larger religious ethos. We are supposed to constantly be surprised and inspired by life and the world around us. We are not supposed to become used to ‘normal’ life. This is not easy, especially in the middle of the winter when we are habituated to our routines. I have wondered for a while why the Rashbam included this story about his grandfather here, in this week’s parsha. Perhaps he did so to provide us with extra inspiration in the middle of the winter, right before Chanukah.

Rebbe Nachman of Breslov, who died at the age of 38, referred to the phenomenon of getting used to our lives as ‘being old.’ He taught his followers that there is a prohibition in Judaism of becoming ‘old’. Once, I spent Shabbat in a small Breslov synagogue in Jerusalem. After services, a hunched over 90-year-old Breslov hasid stood up on a table and shouted, “It is forbidden to become old!” The irony was lost on nobody, nor was the inspiration.

I hope that as the winter continues and as we move on with our lives we don’t fall in to the trap of complacency and of becoming old. Instead, I hope that we can experience the world as if it is truly renewed every single day. I hope not to become desensitized to the poverty around me and to continue to be amazed by my time here in Dakar.