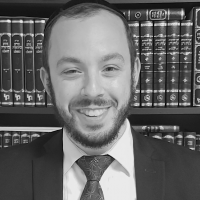 The Blogs
Refael Wolfe
Apply for a Blog
Advertisement
Please note that the posts on The Blogs are contributed by third parties. The opinions, facts and any media content in them are presented solely by the authors, and neither The Times of Israel nor its partners assume any responsibility for them. Please contact us in case of abuse. In case of abuse,
Report this post.

During the festival of Sukkos, Jews are obligated to leave their permanent dwelling place and to live for seven days in sukkos. The Torah tells us that this is so that we will remember that Hashem placed our ancestors in sukkos when He took us out of Egypt. There’s a Tannaic dispute as to the meaning behind the word sukkos in this verse (Sukkah 11b). In general, the word “sukkos” refers to a temporary booth, usually made of wood, with a roof made from the waste from the harvest. Rabbi Akiva holds that Hashem placed the Jews in literal booths when He took them out of Egypt, but Rabbi Eliezer holds that the verse refers to the Clouds of Glory that Hashem provided for them in the wilderness as a sort of protection from the elements. We are then commanded to make literal sukkos to represent the metaphorical sukkos of the past. The halacha follows Rabbi Eliezer.

There’s another halacha that says that “mitzta’er patur min ha’sukkah—Someone who is in pain is exempt from the mitzvah of sukkah. (Sukkah 26a; Shulchan Aruch, Orach Chaim 640:4)” The Gemara says this is true even if there are bothersome flies therein, or if the person has an eye-ache or a headache. The reason is because the Torah says to dwell in sukkos, meaning to dwell as one normally would, and since a person wouldn’t dwell in a place that causes them pain, the sukkah should be no different. In fact, if a person strains themself to fulfill the mitzvah despite their pain, they are considered a simpleton. While the Torah does command to dwell as one normally would, why is it formulated this way? Any other mitzvah, even if it’s hard, is still obligatory. In fact, the more difficult it is to fulfill, the more reward (Avos 5:23). What makes sukkah different from every other mitzvah?

We find two seemingly contradictory aspects to the mitzvah of sukkah. On the one hand, it connotes exile. Some explain that this is the rationale for why the mitzvah of sukkah is juxtaposed to Yom Kippur. Just like Yom Kippur atones for a person’s sins, so does exile. A person should atone for their sins by exiling themself to their sukkah (Maharil, Hilchos Sukkos § 2, 4, based on Pesikta D’Rav Kahana). In fact, if G-d forbid a person was decreed with exile due to their sins, they can “fulfill” this decree by exiling themself to their sukkah. We even see this in the halachos of sukkah itself. If a person lives all year in a sukkah, they can’t fulfill their mitzvah by living there during the festival of Sukkos. They must leave this structure and enter a different sukkah. We see there is an aspect of exile associated with the mitzvah of sukkah. This idea strengthens the above question. Why is a person exempt from the mitzvah if they are in pain? If anything, staying there would be a greater manifestation of the aspect of exile associated with the mitzvah of sukkah.

On the other hand, the mitzvah of dwelling in a sukkah expresses joy and pleasure. The Midrash points out that the Torah mentions no idea of joy with the festival of Pesach, only once mentions it with the festival of Shavuos (Devarim 16:11), yet mentions it three times (Vayikra 23:40; Devarim 16:14-15) with the festival of Sukkos (Yalkut Shimoni, Emor § 654). This is because we are overjoyed after Yom Kippur that our sins have been atoned. As well, Sukkos coincides with the harvest season, where a person is overjoyed at the bounty they have received from Hashem. Many authorities even hold that the physical pleasure one receives from dwelling in the sukkah is the essence of the mitzvah and not just a tangential aspect (for example, Rabbi Akiva Eiger, Responsa 2:138 and Chemdas Shlomo, Responsa § 23). This seemingly contradicts the idea that a sukkah connotes exile, which is associated with pain and discomfort.

However, these two ideas are not contradictory at all. In fact, they are one in the same, with the same intent and manifestation. The Torah wants us to be exiled from our permanent dwelling places and to dwell in the sukkah. Yet, we are obligated to experience great joy living in the sukkah, enjoying the physical pleasure it provides. All of this is to remind us of the great chessed that Hashem did for us when He took us out of Egypt. In essence, the Jews were exiled from what was then their homeland of Egypt. Usually, when a nation is exiled from one land to another, their experiences are full of pain and suffering. They are starving, dehydrated, their clothing becomes ragged, they can’t sleep, etc. This wasn’t so when the Jews were taken out of Egypt. Hashem surrounded them with the Clouds of Glory, which protected them from the elements of the wilderness. They were given the mann from heaven to eat. They were given water from the well of Miriam. The Clouds of Glory even cleaned the clothing that they were wearing (Rashi, Devarim 8:7). They lacked nothing, as if they were living in paradise and not in the wilderness. To remember all of these miracles, we were commanded to dwell in sukkos. There, we are able to experience the seemingly contradictory ideas of exile and joy.

This also explains why a person who is in pain is exempt from the mitzvah of sukkah. If a person is in pain and stays in the sukkah, they are going against the intention behind the  mitzvah. They are also considered an imbecile, since they in fact missed the very point  behind the festival of Sukkos. They should have been filled with joy, taking great pleasure in the sukkah. Through this, they would have remembered all the miracles that Hashem performed for the Jews when they left Egypt. They would have then fulfilled the verse of “in order for your generations to know that I placed the Children of Israel in sukkos when I took them out of the land of Egypt.”

—
The above is a modified excerpt from the newly published English adaptation of the Be’er Yosef on the parsha. It contains gems from the original, in an easy-to-read format, filled with beautiful Torah content for the entire family. It’s suitable for the beginner to the seasoned talmudic scholar. It is available at your local Jewish bookstores.

About the Author
Rabbi Refael Wolfe is originally from Ottawa, Canada. He has a Bachelor of Computer Science from Carleton University and a Master’s in Talmudic Law from Ner Yisrael Rabbinical College. He has studied in Yeshivas Darche Noam/Shapell’s; Mir Yerushalayim; Ner Yisrael, Baltimore; and Kollel Oholei Yom Tov, Toronto. He currently lives with his family in Yerushalayim and is learning in the Ohr Lagolah Semicha Kollel. He writes a weekly devar Torah email called “Parsha Ponders.” Select pieces from this series have been compiled into a sefer with the same name.
Related Topics
Related Posts