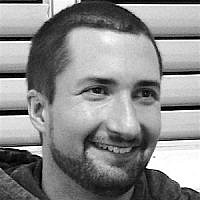 The Blogs
Jonathan Arnold
Apply for a Blog
Advertisement
Please note that the posts on The Blogs are contributed by third parties. The opinions, facts and any media content in them are presented solely by the authors, and neither The Times of Israel nor its partners assume any responsibility for them. Please contact us in case of abuse. In case of abuse,
Report this post.

I walked slowly through a gentle Tel Aviv evening. Rush hour had come and gone and the all too familiar honking of the early evening to which I have become accustomed had passed; I knew in the back of my mind that this all-to-common pastime’s momentary silence would be short lived. As I plodded down Miikveh Yisrael, past the subway construction site, I couldn’t help but be reminded what would lie in store for me the following morning- the abrasive sounds of ferocious machinery and tempestuous pattering of what I have come to call “the jackhammer army”. To counter this war of endless reverberations I adapted my sleep schedule to end before this vociferous onslaught commenced. As a self-proclaimed “night owl” this switch was quite difficult. It, however, beats staying up late only to be awoken by this confounded construction.

As I listened to Aesop Rock which blazed through my comfortable white Sony headphones, I stared off at both the surrounding buildings as well as the night sky (as is my usual practice). I couldn’t help but be reminded of a quote I had read in a forgotten context “Those who stare at the stars are at the mercy of puddles on the ground”. Over the course of my life, this literal and figurative metaphor has been painfully accurate. Despite this revelation, I remained pleasantly distracted.

My wandering attention immediately returned to my comforting music. The lyrical poetry in the form of rap had always provided a sense of calmness even in its most abrasive form. It was also the catalyst for my relatively recent deep appreciation of English literary structure; it also drove me to utilize this interest and explode it into a now ardent passion…writing. Music has also caused me to get lost within my mind when I should be more attentive. There have been many times where I have been walking through the streets, lost in my imaginative world. I have unfairly, but possibly correctly, been accused of ignoring or walking right by friends of mine on the sidewalk. Sometimes, I am capable looking right at them but seeing right through them as if they were ghosts. Many of my close friends know that I live in my head, but for those who do not me quite as well, this is often seen as rude. I can assure everyone that there is no mal intent or negative feelings toward any of them.

My mind suddenly rewound to a time earlier in my life where I actually had a more well-trained voice. Years of both smoking and affinity towards potent potables (Celebrity Jeopardy reference) had taken its violent toll on my now recovering esophagus and vocal chords. I found over these few months of practicing that it will take more than only one day a week of singing in order for my voice to return to full form. Unfortunately, I still couldn’t shake the feeling that this will never completely recover. This seemingly defeatist thought process, however, has not provide enough of an impediment to my mental fortitude. I had already decided that I would work extremely hard to recover a seemingly lost talent.

As I continued down Herzl Street (which I had recently turned on to) I found myself finding new stores which I must have walked by many times prior. This always seemed to happen to me, as I am sure as it has to everybody as well. How many familiar stores are a complete mystery to us? How many people don’t we meet just because we have been recommend to frequent other establishments? This is a question that is destined to remain unanswered in this realm of reality. Only an impossible journey through an infinite multiverse containing all possible outcomes of all realities could possibly hold all these answers. I caught myself in this process, realizing that once I begin to question reality that this is a precursor to a slippery slope down a mental black hole from which an escape can remain elusive.

Deciding instead to concentrate on the step directly in front of me (which I tend to usually overlook amidst the greater journey), my mind returned to a state of temporary ease. I found myself approaching my first destination, my friend’s apartment.  After punching in the all too easily remembered door code I opened the gate and proceeded into the newly renovated courtyard. The carefully laid tiles reflected the imperfectly perfect attempt at crafty handiwork. It was done so well, but the futile attempts of man, no matter the level of skill, would always fall short of absolute perfection; I tend to overanalyze.

I flew up the stairs as I was already a bit late, practice started at 7:30; the time on my phone read 7:37 (just like the airplane).

After knocking on my friend’s door, I was greeted by his response, “come in!’ Turning the handle I found that the door was unexpectedly locked.

After a few lazy seconds I heard the lock turn and click open. The door opened towards my friend.

“What’s up man?” I greeted. Giving him a fist bump.

“Not much, do you mind grabbing the bag with my guitar pedals?”

“Of course, no problem.” I never minded helping friends, especially since he was already carry a couple other things including a guitar.

As we walked down the stairs and toward the music rehearsal studio on Shalma Street, we discussed which two songs we would perform at Bar Giyora during the next open mic night. We both agreed on one song in particular. The other song remained up in the air. As we went through what can only be described as “a sketchy and lackluster lot”. Its only saving grace and sign of vitality was a nearby yoga studio, whose music filled the empty and otherwise quiet air.

As we walked in, we were greeted by the familiar face of the studio manager, who always seemed happy to see us. After this brief but friendly greeting we entered the rehearsal space, which was filled with posters of popular musicians of a wide time spectrum such as Green Day, Led Zeppelin, Janis Joplin, and of course the immortal Bob Marley.

My friend proceeded to set up the amp as well as his guitar effects pedals as I warmed up my voice and the studio manager tested and adjusted the microphones.

Our drummer joyfully entered the room only a few minutes later. Asking us how we were doing, and giving high fives all around, which is an overstatement since it was just the three of us.

As both the guitarist and drummer set up I jumped around which is my usual ritual in order to build the high level of energy needed to perform for two straight hours.

By the time I felt I was at a satisfactory energy level, both the guitarist and drummer were just about ready to start, which was announced by the raucous noise of drums and tuning of the melodic guitar.

I proceeded to joke around on the mic, which is my favorite thing to do… anything to amplify my already over-the-top and ridiculous personality.

After a brief deliberation I eventually decided which song I wanted to warm up on, as is the usual case since my voice needs to begin a slow and methodical process of attaining the appropriate range.

The guitarist began the intro to our first song with electric energy.

The drummer awaited with an enthusiastic presence.

I stepped up to the mic…

About the Author
Jonathan Arnold holds a B.A. in Political Science from Goucher College. He received his Master’s in Secondary Education from Lesley University and is a high school history teacher, activist, and writer. Jonathan currently resides in Tel Aviv.
Comments