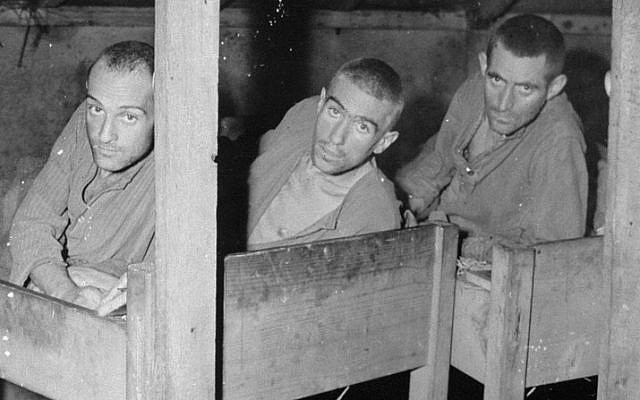 Nearly two months before these men and thousands like them were liberated from the camps, the global Jewish community united to mourn the fate of European Jewry and organize efforts to help the survivors. (George Mallinder / National Archives and Records Administration via United States Holocaust Memorial Museum / Public domain)

In March 1945, the Allied victory was all but palpable, though carnage still raged across Europe. Auschwitz had been liberated at the end of January, yet almost all other major Nazi death camps were still operational.

Germany was desperate and knew defeat was on its way. The Wehrmacht began enlisting 15- and 16-year-old boys. The same month saw the last major German offensive of the war, which soon ended in failure. Hitler paid his last visit to the front, promising that “new weapons” were on their way. They never came.

In his last public appearance before going into hiding and later killing himself, the despot awarded medals to members of the Hitler Youth.

Shortly after the appearance, Winston Churchill made a brief yet powerfully symbolic crossing of the Rhine.

Yet across the Jewish world, the all-but-incalculable toll of the Holocaust was increasingly calculated. Understood. Internalized.

One-third of all Jews in the world had been massacred.

On March 5, a gathering took place at the Hurva Synagogue in Jerusalem, deemed “the greatest Jewish synod to be held in the Holy City in modern times” by The Palestine Post, which reported that:

… all the rabbis in Palestine assembled in conclave, from town and settlement, Sephardi religious leaders in their flowing oriental robes, side by side with Hassidic rabbis, among them the heads of the famous Sadagora dynasty, and rabbis from Europe who had found shelter here from Nazi persecution…

Sitting on the ground and unable to hold back their tears, the esteemed and diverse group of rabbinical leaders recited prayers and read from the Book of Lamentations. They chanted the Mourner’s Kaddish and blew the shofar seven times – a rare, dramatic act in Jewish tradition – before walking together to pray at the Western Wall.

Months prior to the gathering, well before the Red Army reached Auschwitz, Rabbi Hizkiyahu Yosef Mishkovsky drafted a proposal, which he sent to leading figures in the Land of Israel, including prominent rabbinical organizations and the Jewish Agency. Mishkovsky himself was a leader of Polish Jewry, who had come to the Land of Israel at the turn of the 20th century, yet remained in close contact with the communities of Poland and Lithuania, often traveling back and forth before the war. He was also a leader of the Jewish Agency’s Rescue Committee, founded in 1942 with the goal of working to save European Jewry during the Holocaust.

Mishkovsky’s proposal recommended organizing a gathering of rabbis to focus on working to salvage what was left of European Jewry, while also grieving for its destruction by means of a seven-day mourning period and a permanent annual day of mourning and fasting.

Perhaps the most influential recipient of Mishkovsky’s proposal was Rabbi Yitzhak Halevi Herzog, the chief Ashkenazi rabbi of the Land of Israel, who soon thereafter hosted some 50 leading rabbis in his Jerusalem home to further discuss these recommendations.

The group declared that the Jews of Mandatory Palestine must open their homes to the survivors and that special efforts must be made to locate and save Jewish children hidden away in monasteries across Europe, ensuring that they come to the Land of Israel as soon as possible and, no less important, that they receive traditional Jewish education. Moreover, they declared that a national “yahrzeit” (memorial day) for the millions of victims must be proclaimed.

This meeting laid the foundation for the March 5th assembly at the Hurva Synagogue in Jerusalem. It was then that Chief Rabbis Ben-Zion Meir Hai Uziel and Yitzhak Halevi Herzog, and the others present, called for a week of mourning throughout the Land of Israel, and “wherever these words reach,” to begin on March 8th and culminate with a fast day on March 14th. They requested that during the week of mourning the public refrain from activities of leisure and entertainment, and that on the fast day itself, Jewish businesses and transportation would stop, as people dedicated time in synagogue and at home to mourn the victims.

Paralleling the famous words of biblical prophecy, the rabbis’ declaration “went forth from Zion” and – quite remarkably – Jewish communities across the globe adopted it, as did the Jews of Mandatory Palestine, religious and secular alike.

The act of Jewish solidarity was all but unprecedented in the annals of modern history, driven by rabbis, some of whom by today’s standards would be considered Religious Zionist and some ultra-Orthodox, and also decisively adopted by the secular Zionist establishment and non-Orthodox movements globally.

From the capital of the Soviet Union, the Jewish Community Council of Moscow publicly expressed its observance of the week of mourning and the fast day, going so far as to also notify remaining Jewish communities and organizations across Europe about the initiative. The move in Moscow was hailed as historic and encouraging by Jews outside of Communist-controlled Eastern Europe.

The Synagogue Council of America, the umbrella group bridging the three major Jewish movements in the United States, called for all of the country’s Jews to join in the communal mourning.

Survivors in Romania and Greece joined the international initiative.

Many communities throughout the British Empire – from Canada to South Africa to Australia – ignored the objections of their own chief rabbi, Joseph Hertz, one of few major contemporary Jewish leaders to oppose the initiative, and decided to mark the week of mourning with their coreligionists worldwide.

Even Jewish soldiers in the British Army stationed in Tripoli made plans to fast and observe the week of mourning by voluntarily confining themselves to their barracks, while in Mandatory Palestine, Jewish sailors in the Royal Navy attended a memorial service to mark the day.

The British High Commissioner for Palestine and Transjordan himself, Lord Gort, personally received the declaration from the chief rabbis, who also sent it via telegram to Winston Churchill, Franklin Roosevelt and Joseph Stalin, imploring them to not only remember the victims but also to allow the survivors to immigrate to the Land of Israel.

While the “Big Three” were busy overseeing the ongoing war efforts across Europe and in the Pacific, Lord Gort was receptive to the declaration, letting the rabbis know that he would send it along to London. He also ordered that Jewish officials throughout Mandatory Palestine would be released from their duties on the fast day.

In fact, commemoration of the fast day in British Mandatory Palestine was quite extensive, including a stoppage of work and traffic, and a complete “internal curfew” from 9 a.m. to 11 a.m.

Jewish police officers and schoolchildren donated money on the day to a rescue fund for Holocaust survivors.

The flags at the Jewish Agency building and the Polish consulate were flown at half-mast.

Even the major cities largely observed the somber day, as reported in The Palestine Post:

A quiet self-discipline prevailed all through Jewish Palestine yesterday, the day of fast and voluntary curfew which ended the week of mourning for European Jewry… Jewish residential sections of Jerusalem and Haifa were deserted, and even children kept indoors… The usually crowded and bustling streets of Tel Aviv were hushed and in the evening shop windows were dark…

There had been previous calls for international days of Jewish solidarity and fasting, including a declaration by Rabbis Herzog and Uziel, not long after the outbreak of the war. Yet nothing before (nor probably since) seemed to compare to the response elicited by the March 1945 initiative – which transcended virtually all boundaries and distinctions within the global Jewish community.

Perhaps the pain at the time was so raw and so real that Jews around the world – regardless of nationality or level of religious observance – were simply waiting for some sort of call to collective bereavement.

Some two months before the last camp was liberated, and six decades before the United Nations designated International Holocaust Remembrance Day, that call came from Zion.

Many thanks to Rabbi Shmuel Katz, leading scholar of the Israeli Rabbinate, for his assistance and expertise.