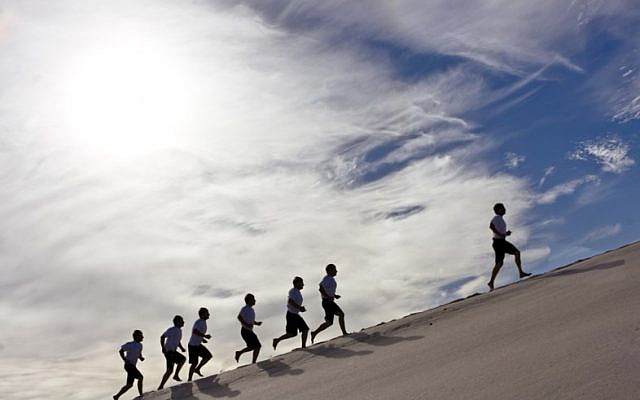 Rabbi Sacks z’’l had prepared a full year of Covenant & Conversation for 5781, based on his book Lessons in Leadership. The Office of Rabbi Sacks will carry on distributing these essays each week, so people around the world can continue to learn and be inspired by his Torah. (Please scroll down for the full article.)

Unfortunately, the family are unable to see people in person in the usual way during the Shiva period. We would therefore encourage anyone who wishes to share messages of comfort, stories, video reflections, tributes or photographs to do so by sending them to: tributes@rabbisacks.org

A while back, a British newspaper, The Times, interviewed a prominent member of the Jewish community and a member of the House of Lords – let’s call him Lord X – on his 92nd birthday. The interviewer said, “Most people, when they reach their 92nd birthday, start thinking about slowing down. You seem to be speeding up. Why is that?”

Lord X’s reply was this: “When you get to 92, you see the door starting to close, and I have so much to do before the door closes that the older I get, the harder I have to work.”

We get a similar impression of Abraham in this week’s Parsha. Sarah, his constant companion throughout their journeys, has died. He is 137 years old. We see him mourn Sarah’s death, and then he moves into action. He engages in an elaborate negotiation to buy a plot of land in which to bury her. As the narrative makes clear, this is not a simple task. He confesses to the local people, Hittites, that he is “an immigrant and a resident among you” (Gen. 23:4), meaning that he knows he has no right to buy land. It will take a special concession on their part for him to do so. The Hittites politely but firmly try to discourage him. He has no need to buy a burial plot: “No one among us will deny you his burial site to bury your dead.” (Gen. 23:6) He can bury Sarah in someone else’s graveyard. Equally politely but no less insistently, Abraham makes it clear that he is determined to buy land. In the end, he pays a highly inflated price (400 silver shekels) to do so.

The purchase of the Cave of Machpelah is evidently a highly significant event, because it is recorded in great detail and highly legal terminology, not just here, but three times subsequently in Genesis (here in 23:17 and subsequently in 25:9; 49:30; and 50:13), each time with the same formality. Here, for instance, is Jacob on his deathbed, speaking to his sons:

Something significant is being hinted at here, otherwise, why specify, each time, exactly where the field is and who Abraham bought it from?

Immediately after the story of land purchase, we read, “Abraham was old, well advanced in years, and God had blessed Abraham with everything.” (Gen. 24:1) Again this sounds like the end of life, not a preface to a new course of action, and again our expectation is confounded. Abraham launches into a new initiative, this time to find a suitable wife for his son Isaac, who at this point is at least 37 years old. Abraham instructs his most trusted servant to go “to my native land, to my birthplace” (Gen. 24:2), to find the appropriate woman. He wants Isaac to have a wife who will share his faith and way of life. Abraham does not stipulate that she should come from his own family, but this seems to be an assumption hovering in the background.

As with the purchase of the field, this course of events is described in more detail than almost anywhere else in the Torah. Every conversational exchange is recorded. The contrast with the story of the Binding of Isaac could not be greater. There, almost everything – Abraham’s thoughts, Isaac’s feelings – is left unsaid. Here, everything is said. Again, the literary style calls our attention to the significance of what is happening, without telling us precisely what it is.

The explanation is simple and unexpected. Throughout the story of Abraham and Sarah, God promises them two things: children and a land. The promise of the land (“Rise, walk in the land throughout its length and breadth, for I will give it to you,” Gen. 13:17) is repeated no less than seven times. The promise of children occurs four times. Abraham’s descendants will be “a great nation” (Gen. 12:22), as many as “the dust of the earth” (Gen. 13.16), and “the stars in the sky” (Gen. 15:5); he will be the father not of one nation but of many (Gen. 17:5).

Despite this, when Sarah dies, Abraham has not a single inch of land that he can call his own, and he has only one child who will continue the covenant, Isaac, who is currently unmarried. Neither promise has been fulfilled. Hence the extraordinary detail of the two main stories in Chayei Sarah: the purchase of land and the finding of a wife for Isaac. There is a moral here, and the Torah slows down the speed of the narrative as it speeds up the action, so that we will not miss the point.

Despite all the promises, God does not and will not do it alone. By the very act of self-limitation (tzimtzum) through which He creates the space for human freedom, God gives us responsibility, and only by exercising it do we reach our full stature as human beings. God saved Noah from the Flood, but Noah had to make the Ark. He gave the land of Israel to the people of Israel, but they had to fight the battles. God gives us the strength to act, but we have to do the deed. What changes the world, what fulfils our destiny, is not what God does for us but what we do for God.

That is what leaders understand, and it is what made Abraham the first Jewish leader. Leaders take responsibility for creating the conditions through which God’s purposes can be fulfilled. They are not passive but active – even in old age, like Abraham in this week’s parsha. Indeed in the chapter immediately following the story of finding a wife for Isaac, to our surprise, we read that Abraham remarries and has eight more children. Whatever else this tells us – and there are many interpretations (the most likely being that it explains how Abraham became “the father of many nations”) – it certainly conveys the point that Abraham stayed young the way Moses stayed young, “His eyes were undimmed and his natural energy unabated” (Deut. 34:7). Though action takes energy, it gives us energy. The contrast between Noah in old age and Abraham in old age could not be greater.

Perhaps, though, the most important point of this parsha is that large promises – a land, countless children – become real through small beginnings. Leaders begin with an envisioned future, but they also know that there is a long journey between here and there; we can only reach it one act at a time, one day at a time. There is no miraculous shortcut – and if there were, it would not help. The use of a shortcut would culminate in an achievement like Jonah’s gourd, which grew overnight, then died overnight. Abraham acquired only a single field and had just one son who would continue the covenant. Yet he did not complain, and he died serene and satisfied. Because he had begun. Because he had left future generations something on which to build. All great change is the work of more than one generation, and none of us will live to see the full fruit of our endeavours.

Leaders see the destination, begin the journey, and leave behind them those who will continue it. That is enough to endow a life with immortality.