The Blogs
David Herman
Apply for a Blog
Advertisement
Please note that the posts on The Blogs are contributed by third parties. The opinions, facts and any media content in them are presented solely by the authors, and neither The Times of Israel nor its partners assume any responsibility for them. Please contact us in case of abuse. In case of abuse,
Report this post. 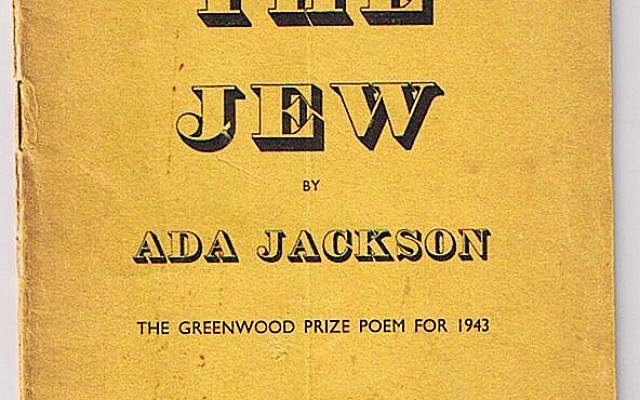 In 1943 my beloved father, R.G. Herman, bought a copy of Ada Jackson’s Greenwood Prize winning poem “Behold the Jew,” and only many years later did I find it and begin to read with growing excitement this wondrous, deeply moving and truly remarkable tribute to the Jewish People by a non-Jewish poetess, the Warwickshire-born Ada Jackson, which in my view may be regarded as one of the peaks of English poetic achievement and which has regrettably lain far removed from public awareness and the literary recognition which it deserves.

As one reads this magnificent and epic 700-verse work one asks oneself: What motivated the poet to write so lovingly and admiringly about the Jewish People with such an all-embracing vision of its achievements? How was she able to express such an empathy and sympathy for Jewish suffering through the ages and in the Holocaust years in which she wrote?

Admittedly, she wrote at a time when the horrors of the Holocaust were just beginning to be revealed. Nonetheless her deep and total sympathy and identification with the Jewish people and its suffering, its history and achievements is quite remarkable and especially in these days of the alarming recrudescence of the curse of anti-Semitism worldwide I felt that this work of love and appreciation of the Jews by an English non-Jewish writer should once more be made public in order to tell the world the truth about the Jews.

In view of the widespread ignorance about the Jews and their current demonization I suggest that this wonderful work should be republished and made available to be studied and memorized by pupils in schools throughout Europe, South America, Australia and New Zealand and the United States because it can play a leading role in immunizing the current and future generations against the plague of anti-Semitism and making people everywhere aware of the unique contribution made by Jews throughout the ages to civilization and humanity’s progress and development, and not least in the last and current centuries, so that the abuse and vilification which Jews are currently subject to will be replaced by widespread admiration, sympathy, and deep regret for unjustified centuries of hatred, prejudice, abuse and slaughter.

In my humble opinion widespread distribution of Ada Jackson’s magnificent poetic tribute will contribute significantly to revising the lamentable attitude of considerable sectors of human society towards the Jewish people and the State of Israel.

I attach here a segment from my reading of Behold the Jew which will enable you to appreciate its great poetic beauty and significance.