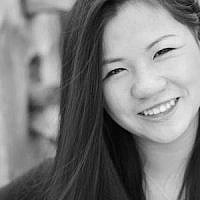 The Blogs
Madison Laks
Apply for a Blog
Advertisement
Please note that the posts on The Blogs are contributed by third parties. The opinions, facts and any media content in them are presented solely by the authors, and neither The Times of Israel nor its partners assume any responsibility for them. Please contact us in case of abuse. In case of abuse,
Report this post.

In America, I’m the minority because I’m Jewish and Asian, and the idea of an Asian Jew is sometimes hard for people to grasp for some reason. I have often received comments like “You don’t look Jewish” and “You’re the first Asian Jew I’ve ever met” and once, “You can’t be Jewish; you’re Chinese; you can’t be both.” For some reason, it’s a big deal that my religion and my appearance don’t look like they coordinate.

In Israel, I’m the minority because I’m American, and I speak English (and don’t speak Hebrew). When I speak English or do something really touristy like take a picture of a street sign, I stick out like a sore thumb. However, I don’t feel like I stick out with my Chinese-ness very much… When I get on the bus, I scan my Rav Kav card, find a place to sit or stand, listen to my music and then press the button before my stop. If I mind my own business and don’t say a word, I can blend in just fine. If I look like I know what I’m doing, I can look like I’m not out of place or like I’m a minority. (Of course Chinese is a minority in Israel, but people here don’t really seem to care. More people tend to care about the fact that I am from America.)

In America, it’s my race and religion that sets me apart. In Israel, it’s my nationality that sets me apart. Regarding questions from random strangers about my appearance, Americans have often ask, “What kind of Asian are you?” (which isn’t exactly the most politically correct way to ask, but I’m not getting into that right now), while Israelis often ask, “What brings you to Israel?” Many people who live in Israel have made Aliyah (the move to live in Israel) from many different backgrounds. From my experience, I get the vibe that no one cares about what I look like here, but about where I came from and my journey to the Holy Land.

Some people in Israel have asked me, “Where are you from?” and I answer, “near Boston,” and that’s the end of the “place of origin” conversation 99% of the time. When I am in the States, people have asked me, “Where are you from?” and I answer, “Framingham, MA” and they then proceed to ask “No, but where are you from from?” and the answer to that question I’ve learned is supposed to be “I was born in China.” The only person to question me about my Asian-ness in Israel was a shopkeeper in the Old City shuk. He called out to me, “Are you Vietnamese?” but I just ignored him and kept walking because he was only trying to get me to buy something anyway.

Israel has served and still serves as a safe haven for Jewish people who are not safe or welcome in their own land. Israel is kind of like a mini melting pot with people of all races and ethnicities. Being Israeli doesn’t mean you were necessarily born in Israel or look a certain way; it means you live in Israel. So when I see people on the bus, I never assume that person is Israeli or a tourist. People make Aliyah from many different parts of the world. Maybe that’s why people don’t really care what I look like here.

Being in Israel, I am often surrounded by other Jews, so in the Jewish sense, I am in the majority. What sets me apart in America connects me to the people in Israel. I like the feeling of fitting in here, but I also like being unique in America. For now, I’ll just put up with the annoying questions and keep rockin’ my Jewish-Asian-vegetarian-girl-who-was-adopted status in America.

About the Author
Madison is a senior at the University of Connecticut and lived in Israel for two months. She writes when she finds strong enough inspiration and/or needs to have her voice heard. Her passions include Judaism, social justice, and Israel.
Comments