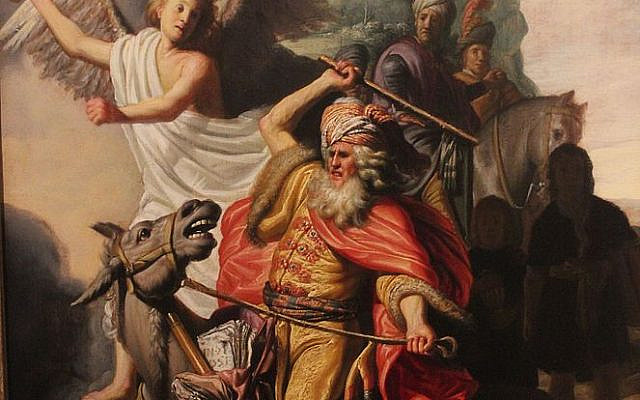 On the face of it, the stories of Avraham and Balaam are parallel. Both Avraham and Balaam are called to leave their land and go westward, to or near the land of Canaan. But while Avraham is called by God to go, lekh likha, Balaam is told by God to stay, lo teilekh. The first lesson, then, is that it is not the going that is important; it is the listening to God. If God says go, you go, and if God says stay, you stay. So they are both commanded by God, and Balaam, at least in principle, is willing to obey. But whereas Avraham follows God’s command, Balaam resists it. Why? The difference lies not in how they are prepared to act, but how they are prepared to see.

God does not just command Avraham to go to Canaan. God commands him to go to the land asher ar’ekha, that I will show you. To fulfill that command, it is not enough to obey. One must also learn to see. To find the chosen land, Avraham has to be able to see what God is showing him. This is why the climax of Avraham’s trials, the akeida, which also begins with a lekh likha, is all about seeing properly: seeing the place from a distance, telling Yitzchak that God will see the sheep, seeing the angel, seeing the ram, and even naming the place “the mount where God is seen.” Avraham’s career begins with seeing and ends with seeing, seeing what God is showing him, seeing as God would see.

Balaam is a different story. Balaam is prepared to do “as God speaks to me,” that is, to listen to God (Bamidbar, 22:8). There is a huge difference between obeying and agreeing. Balaam continues to see things differently than God. If he obeys, he will do so with reluctance and resistance: “God refuses to let me go with you,” he says (22:13). I still want to go, but God is holding me back.

God tries to teach Balaam otherwise. God tells him not to go with the messengers, not to curse the people, for “they are blessed.” God is letting him know what the true, deeper reality is. But, of course, Balaam continues to see things his way. As Rashi comments, “He saw that it was evil in God’s eyes, and yet he desired to go” (32:22). Balaam did not care how God saw the matter; it was his perspective that mattered.

However, as we see in the bizarre story of the speaking donkey, God isn’t done with the education of Balaam. The point of the story is clear: the donkey is able to see what Balaam cannot. Three times we hear, va’teireh ha’aton, “and the donkey saw.” It is remarkable that the verse does not indicate anything miraculous about the donkey seeing the angel; it is only when the donkey speaks that we read, “And God opened the mouth of the donkey” (22:28). Animals, as we know, can sometimes smell, hear, and see things that we as humans cannot. This is partly because of the way their senses have adapted to their environments, but it is also partly because they experience the world for what it is. They do not have the same subjective lens through which we humans view our experiences, filtering, shaping, and seeing things in ways that are consistent with our worldview. The simple, unfiltered seeing of the donkey is like the simple seeing of children, free from the rationalizations and self-deceptions of adults. It allows them to see what we so often cannot.

Balaam’s arrogance, self-importance, and desire for fame and enrichment blind him to the obvious facts. And now, just as God opened the mouth of the donkey, God miraculously opens the eyes of Balaam so that he can see the angel, and the truth. But does Balaam learn? Hardly. “Now, if it is evil in Your eyes, I will return back,” he responds (32:34). It is still not evil in my eyes. I understand that it may be evil in Your eyes, and if you tell me not to go I am prepared to listen. You can get me to obey, but I refuse to see things Your way.

At this stage, God allows for a compromise. If Balaam can’t be taught to see right, God can at least get him to say the right thing, force-feeding him lines, putting the very words in his mouth. Perhaps there is a lesson here: even when we disagree with someone, it can pay to say the words that they want to hear. “Yes, dear,” can be the two most important words in a marriage. Insincerity is never good, but words do have a power of their own. If we choose to say the desired words, even if we do not fully believe them, then not only can they be helpful to the one hearing them, but they can also help shape our own perception, helping to change the way we see.

This is what happens with Balaam. When he begins working with Balak, he of course continues to see things his way, even as God is working against this. Balak helps with this, making sure that Balaam only sees the “edge of the people” and does not appreciate their totality and their blessedness (22:41, 23:13).

Choosing to see selectively is a key strategy in reinforcing the way we see the world. Consider how rare it is that we try to see the true complexity and scope of a matter, to realize that things aren’t so black and white, to see all the nuances. In fact, it was initially thought that all the information easily available on the Internet would lead people to develop more informed and nuanced views. What actually happened, and what continues to happen, however, is that people choose to see only the “edge of the people,” seeking out the information that reinforces their established position. It is so much easier to see selectively, to see just what we want to see.

That was the attempt. But the words that Balaam utters begin to have their effect. In his first two poetic prophecies, we hear him declaiming-with the words fed to him by God-how the people are truly to be seen: “For I see them from the tops of mountains, and from the hills I behold them”; “He has not beheld iniquity in Jacob, neither has he seen perverseness in Israel” (23:9, 21). It seems that these words start to seep in to his own consciousness, so that by the third prophecy, he begins to actually believe them. It is now, at this third and final stage, that Balaam truly begins to see: “And Balaam saw that it was good in the eyes of God to bless Israel” (24:1).

This is the turning point. Before it was “bad in God’s eyes” to curse, but he refused to see and resisted. Now it is “good in God’s eyes” to bless; he sees this and he embraces it. It is these very words vayar….ki tov, “and he saw….that it was good,” that echo the very first act of seeing in the Torah: va’yar E-lohim ki tov, “And God saw that it was good.” This is an act of divine seeing. Balaam is now seeing as God sees.

Finally, he can now see. He can now lift up his own eyes and see the people as they truly are (24:2). It is now that he declares that he can see “the vision of God” and see with “eyes open,” self-descriptions that have been thus far absent (24:3). And it is now and only now that he is filled with the “spirit of God.” He is not simply parroting back words. He is elevated and inspired by what he sees, and he speaks from his heart.

With this Balaam’s education is complete. Sadly, however, the change is short-lived, as the remainder of the parasha bears out, for learning to see properly is not something that can be done in an instant. Even when our eyes are open, we often resist and choose to remain blind. It is a life-long struggle to be the students of Avraham, to learn to see the “land that God will show you.” The keys are given to us in this parasha: see fully, not partially, and say the right words even if you do not yet believe them. Ultimately, you will be able to see rightly, to see with a “good eye,” to see as God would have you see.