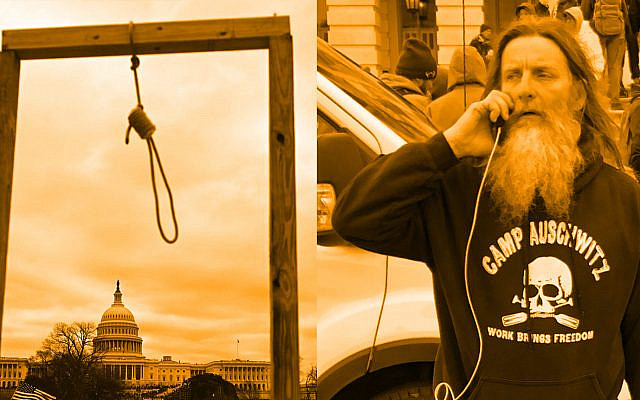 Robert Keith Packer's shirt, right, was one of many hate symbols present at the storming of the Capitol. Other rioters constructed a noose. (Andrew Caballero-Reynolds / AFP Images and screenshot from Reddit via JTA)

“Unbelievable,” “unprecedented,” “crazy”: These are all terms we instinctively use as an expression of incredulity when we experience a deviation from our norm. When it’s a dark deviation, these expressions give voice to our shock and pain. However, they can also provide a measure of psychological comfort as we reassure ourselves that our so-called norms are normal, and the aberration is precisely that.

The notion of the unbelievable enables us to preserve our myth of stability, which is so central to those of us fortunate enough to live in situations of political and material wellbeing. We operate within the myth that order and predictability, reason, decency, and common sense will prevail. It is this myth that enables us to fall asleep at night and to wake up the next morning.

It is, however, unbelievable, so to speak, that the world in general, and we Jews in particular, classify disorder and destruction as unbelievable. Who more than us has witnessed the temptation of fascism? The ability to control the masses through fear; the possibility for reasonable people to suspend truth and facts, for the seemingly civilized to mute their moral conscience. How, after the Holocaust, can anything be unbelievable?

We Jews, however, have led the charge to preserve the status of the Holocaust as the paradigm for that which is unbelievable. We have made the Holocaust not merely separate and untouchable, but in many ways irrelevant, an exceptional event to which nothing can be compared, and consequently, almost nothing can be learned.

Historians are standing by at the ready to refute any comparison of the Holocaust with other genocides or mass murders. Similarly, Nazism is the embodiment of pure evil, incomparable to any other fascisms, not to speak of fascist tendencies. No injustice, criminality, or oppression can ever be likened to the Holocaust. It is sui generis, insulated from our everyday experiences. Consequently, it does not factor into our perception of reality. By placing the Holocaust off-limits as an applicable comparison, our myth of stability can remain believable.

Trump is not Hitler and the breaking of the glass windows of Capitol Hill was not Kristallnacht. However, subverting the will of the people and the rule of law, embracing violence as a political means, aligning the greatness of one’s nation exclusively with one man, accepting as true and morally obligatory only that which serves your party and ideology, fostering fear of and hatred toward minorities and ideological foes, are all precedents that we witnessed in Nazi Germany, precedents which are both plausible – hence believable – and dangerous for the future of democracy worldwide.

We Jews needed the Holocaust to be unbelievable in order to get up the next day, and indeed every day, and to believe that we can have a future within humanity. We know, however, that the Holocaust and most certainly the events on Capitol Hill were not unbelievable. They not only happened but can happen again. The true lesson of the Holocaust is that evil is not unbelievable, and fascist and racist tendencies are not abnormal. We bear witness to the fact that humanity is capable of tremendous decency, kindness, and intellectual and moral greatness as well as deep depravity and unconscionable evil. By attempting to marginalize the possibility of these failings, we lure ourselves into complacency and potentially allow them to become the new normal.

For four years now, much of the world has witnessed the fracturing of American society accompanied by a decline of the values of truth, facts, decency, and tolerance. The words “unbelievable” and “unprecedented” have been used all too often to marginalize these phenomena and under-estimate their dangers. It is comforting to believe that normality will return the moment Trump leaves the presidency or is taken off Twitter.

But democracy, the rule of law, decency, reason, and tolerance will only prevail when we defend them and develop intellectual, educational, and cultural frameworks to enable all, even those on the other side of the partisan line, to embrace them. Free elections represent healthy democratic forms of government. However, free elections do not alone preserve a democratic culture. The lesson of the twentieth and now twenty-first century is that this culture is frail and remarkably susceptible to threats. Attacks on it are not unbelievable. We may need to believe that they are unbelievable in order to go to sleep at night. But when we wake up in the morning, we need to recognize how believable they are and begin to act accordingly. 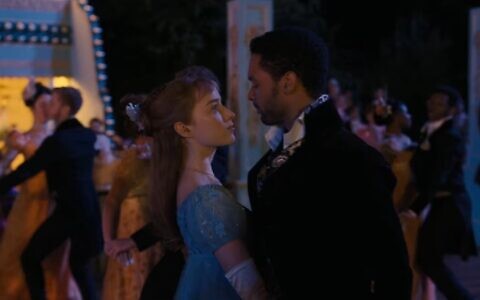 UK warns new virus variant may be more deadly, will be around ‘forever’
AP and TOI staff 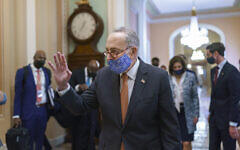 ‘There will be a trial’: US House to send Trump impeachment article Monday
MARY CLARE JALONICK and LISA MASCARO