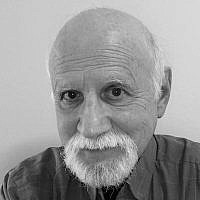 The Blogs
Martin Wasserman
Longtime pro-Israel activist, writer, speaker, blogger
Apply for a Blog
Please note that the posts on The Blogs are contributed by third parties. The opinions, facts and any media content in them are presented solely by the authors, and neither The Times of Israel nor its partners assume any responsibility for them. Please contact us in case of abuse. In case of abuse,
Report this post.

The decision by Ben and Jerry’s to not sell their ice cream in Judea and Samaria, which they incorrectly call “occupied Palestinian territory,”  is part of a disturbing and dangerous trend among liberal American Jews. Forced to choose between their identity as progressive political activists and their identity as Jews, they increasingly choose the former over the latter, showing how weak their Jewish identity really is.

But what exactly is meant by Jewish identity? What are the traits that define someone as living an authentically Jewish life?

The core of Jewish identity is God, the Torah, and the Covenant. The great contribution of the Jewish people to the world is the revelation that the world is governed by God, not Man, that He governs events on Earth to achieve His own purposes, which are not the same as Man’s purposes, and that human efforts to bring about change, no matter how noble they may appear, will prove futile in the end if they try to thwart the will of the Creator.

The experience we shared on Mount Sinai was the greatest divine revelation in history. This revelation is what has bound us together as a people and enabled us to continue as a nation, even when we were dispossessed from our land for so many centuries.

When a Jew rejects Mount Sinai, he also rejects the central precepts of Judaism, including the promise of the Land of Israel. He may then assume that Jewish claims to the Land are no better than Arab claims, and that efforts by Israelis to forcefully assert their claims are unjust, and that he in his “love of justice” must vigorously oppose these efforts, thereby turning himself into an enemy of his own people.

Nor does he have a strong reason to remain loyal to the tribe. In fact, there’s a good chance he or his descendants will eventually drop out of Judaism altogether. “Cultural Judaism” is not sufficiently compelling to maintain a Jewish identity in times of great duress, like the times we’re entering now.

But a disbelieving Jew still needs something to satisfy his idealism, his desire to improve the world, which is itself a Jewish trait. So he replaces his noble heritage with an inferior substitute, typically a “universalist” ideology rooted in Marxism, that promises to produce a utopian society by forcing everyone to work for what it defines as the “common good,” while eliminating any strong national or religious identities that could get in the way of the soon-to-be-achieved universal harmony.

Of course the promised utopia never arrives, because it’s based on false assumptions to begin with. But in embracing it, a disbelieving Jew often deludes himself into thinking that he is acting according to “true” Jewish values.

In fact, when he places his trust in the false gods of leftism, he’s likely to see actual Jewish belief as an enemy that must be fought, as it threatens his utopian fantasy of a world without religion or religious identities. He may even feel a need to direct special venom at the Jewish state itself for failing to live up to his own self-proclaimed “enlightened” values. Even if he still feels some faint kinship toward his fellow Jews, he won’t stand up for them when they’re attacked by his fellow left-wing ideologues, but will crumble under leftist pressure, as in the case of Ben & Jerry’s.

Jews who have spurned their heritage have caused us more harm throughout the ages than all of our non-Jewish enemies, by undermining us and weakening us from within. The only sure way to overcome our adversaries and secure our heritage for future generations is to remain absolutely steadfast in our commitment to God, the Torah and the Covenant despite all pressures, threats or bribes, to place our spiritual goals above our material ones, to focus less on repairing the world and more on repairing ourselves, and to concern ourselves more with pleasing our Creator than pleasing popular opinion.

When we do these things, we may at last fulfill the purpose for which the Jewish nation was created thousands of years ago, and finally fill the Earth with the knowledge of God. May it be so in our times!

About the Author
Martin Wasserman is the former producer and host of the cable TV series "Spotlight on the Middle East." A long time pro-Israel activist, he frequently writes articles on Jewish and Israeli topics. He is also a retired software developer based in Silicon Valley.
Related Topics
Related Posts
Comments