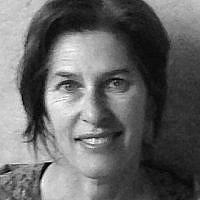 The Blogs
Esther Takac
Apply for a Blog
Advertisement
Please note that the posts on The Blogs are contributed by third parties. The opinions, facts and any media content in them are presented solely by the authors, and neither The Times of Israel nor its partners assume any responsibility for them. Please contact us in case of abuse. In case of abuse,
Report this post.

This week we begin to reread the Torah, our book of stories. After a heart breaking week of random violence, the terrible ongoing cycle of hurt, revenge and hatred, I wonder what words and images in our stories may sustain and nurture us. As a psychologist, and a writer, I believe in the power of story. For who are we but the stories we tell ourselves, about ourselves, and believe? A wise saying explains “If you don’t know the trees you may be lost in the forest, and if you don’t know the stories you may be lost in life.” But as a people we have so many stories – it’s important to know which to take into our hearts and which to let go of.

So in these troubled times I want to look into the Torah to find what our stories tell us; how Parashat Bereshit frames our understanding of the creation of the world. I am aware there are various ways of understanding the Bereshit story, different interpretations and commentaries, and so there is a need to choose which of these will shape our lives.

Many commentaries on Bereshit describe the balance, harmony and peace with which the world was created. We should be aware that not all creation stories focus on balance. The most famous of Near Eastern creation myths, the Babylonian Emuna Elish, tells of a battle between the gods of Marduk and Tiamat, the Greek legends tell dramatic tales of the gods fighting each other.

The Torah story itself does not start with balance; it begins instead with Tohu Vavohu – words that do not appear anywhere else in the Torah. “Tohu” has been understood to describe a chaotic condition, “an indistinct confused entangled mass.” Creation then involves an ordering of the chaos into opposing elements that form a harmonious balance. So the first day involves taking that Tohu Vavohu and dividing light from dark, day from night – the creation of time. R. Samson Rafael Hirsch writes poetically of the balance we all need between light and dark. “In our temporary stay on earth we cannot bear constant light. When we have used all our forces for twelve hours in the rays of light, we sink back, weary and enervated, into the old darkness, sheltered under the motherly wing of night.”

Lurrianic Kabbalah, developed by R. Isaac Luria in the 16th century, provides a unique interpretation of the creation of the first light. Explained simply, the original light of creation was contained in a vessel, but the power of this light was so intense the vessel shattered, and the light was scattered in two directions. Whilst some of this light, called Holy sparks, returned upwards to its source, to God, the other sparks, entangled with the husks of the vessel, the klipot, fell to earth, and are scattered all over the world. These sparks, which can be seen to represent positive life energy and sacredness, yearn to return to their source. The process of lifting the sparks brings about Tikkun Olam – Repairing of the World, and this is the task of humankind. These ideas provide a beautiful image of the sparks existing across different lands and peoples. Rather than sacredness being embodied in one culture only, we are reminded to be respectful of the positive life energy contained in a range of traditions. Taking on this story, an entire jewish vision of social justice – Tikkun Olan has developed.

Many commentaries, midrashim and aggadot relate to the creation of the Adam, the first person. One midrash tells that the soil for making the Adam was gathered from all four corners of the earth, underlining our belonging to all parts of the world. Another aggadah tells that the first Adam was created alone for the sake of peace among humankind. So that no man or woman may say “my father (or mother) was greater than yours”. Also this first person was created alone in order to teach that whoever destroys a life is considered as if he destroyed an entire world, and whoever saves a life is considered as if he saved an entire world. If we choose to hold these stories close to our hearts, they guide us in recognizing the equality and sanctity of each individual life, and acting accordingly.

Themes of balance can be found in the relationship between the genders in Bereshit. The verse describing the creation of the Adam has caused much discussion amongst the Rabbinic commentators. “So God created the Adam, in the image of God, male and female God created them” (chap 1 verse 27). How could God create a person who was both male and female? The majority of Rabbis, including Rashi, interpret that the first Adam was actually a man and a woman joined back to back, the woman’s face looking out one way, the man’s face looking the other. So the Adam was created with two faces “panim”. Harav Gifter explains that the “panim” –faces, also means outlooks, facets, perspectives. The original Adam contained a duality that was later separated into male and female, each with its own perspective and outlook.

This interpretation suggests that man and woman were created at the same time, allowing for an egalitarian reading of the text. There are of course other interpretations that have been used to justify woman as secondary and subordinate. We need to be aware that our understanding of Torah is culturally embedded, reliant on translations and on which midrashim we happen to know. Do we translate tzela as rib or side? Do we understand Eve’s “ezer kenegdo” role as a subordinate helpmate to Adam? Or as a helper standing opposite, balancing his aspirations with her own separateness and individuality?

The Torah even shows a balance in the different names used for God – Elohim referring to God in the attribute of justice and Hashem referring to God in the attribute of mercy. God had originally wanted to create the world with justice alone, and so the first chapter of Bereshit uses the name Elohim. But seeing the world could not survive so, God added an equal measure of mercy. This idea is clarified in an aggadah that tells of a king who had goblets made of delicate glass. The king said, “if I pour hot water into them they will expand and burst, if cold water they will contract and break. So what did he do? He mixed the hot and cold water together and poured it into the goblets so they remained unbroken. Likewise The Holy One said “if I create the world with the attribute of mercy alone, its sins will be too many, if with justice alone, how could the world be expected to endure? So I will create it with both justice and mercy, and may it endure.” In our own lives we too must learn to temper justice with mercy always.

And so these stories from Bereshit describe a world created with balance and harmony. Balance between light and dark, between man and woman, between justice and mercy, And harmony existing amongst different people, guided both by an awareness of the sanctity of each individual life and by the recognition of the holy sparks across traditions.

Whilst the commentaries above, drawn from our tradition, highlight and emphasize these themes, other commentaries focus on different themes and those stories lead us in other directions. Sadly we are all too aware of how the teachings of religious texts can be used not only for good but also for harm. I want to emphasize the fact that we choose which of our commentaries, our stories, we focus on. For there are too many – we cannot retell and teach them all. It is our responsibility to be mindful of what interpretation of our texts we keep in our hearts and pass on to our children. What stories we tell ourselves, about ourselves, and believe. For this will be our, and their reality.

But the world today has lost that balance and harmony. In our own lives we struggle to find the balance between justice and mercy, the harmony between man and woman, between different peoples and traditions. According to Jewish tradition people are the only ones who can repair the world, putting back the balance and harmony that were there in the beginning. The parasha of Bereshit, together with many of its commentaries, gives us a rich inheritance of stories; a vision of what that fixed world might look like. Words and images that may nurture us in these troubled times.

About the Author
Esther Takac is a child and adult psychologist working in private practice and as a consultant with The Lighthouse Institute delivering workshops on the effect of trauma on children and adults. She is the author of three books including "Genesis the Book with Seventy Faces" (National Jewish Book Award).
Related Topics
Related Posts
Esther Takac
Comments