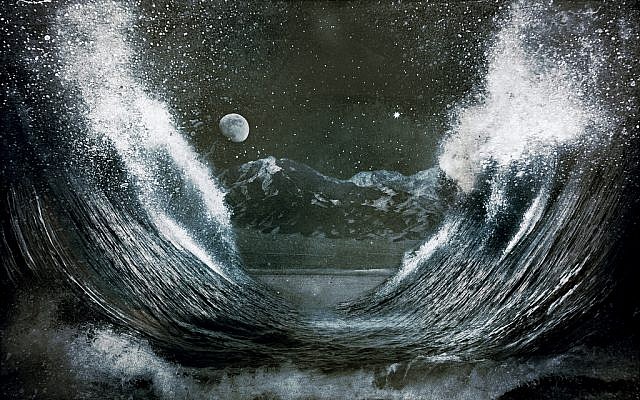 The Egyptian Empire has been pummeled by the devastating ten plagues. In a panic, after the Death of the Egyptian firstborns, Pharaoh and the Egyptian people beg the Israelite people to go; to go to the desert to worship as Moses had been requesting from the first time he confronted Pharaoh.

However, shortly after the Jews depart their homes and Egyptian cities, Pharaoh realizes that this is not a temporary religious excursion. The Jews have indeed headed to the desert, but they have no intention of ever returning to the slavery of Egypt – it was a sham. They have escaped the bondage of Egypt and mean to make way towards their ancestral home, the land of the Patriarchs, the land then known as Canaan. In a frenzy, Pharaoh organizes his army of six hundred chariots and pursues the fleeing slaves.

The Egyptian army traps the Israelite slaves between their mighty chariots and the sea. However, God is not finished with His miracles or pouring His wrath onto the Egyptians. The sea splits, the Jews enter, to come out unscathed on the other side. The Egyptians follow, to find the miraculous walls of water collapsing on them, drowning every single Egyptian soldier. The Jews, filled with joy over the miraculous salvation, break out in song, the famed Song of the Sea.

The very first line of the song states:

“And then they will sing, Moses and the Children of Israel, this song to God, and they said to say.”

The Berdichever wonders as to the repetition of the verb “to say,” and takes the opportunity to explore an aspect of joy. He states that the primary feeling of joy is in one’s heart. Joy is an internal emotional state. Why the need to sing? Why the need to outwardly exhibit this internal feeling?

He explains that there is an added enhanced component to joy when it is articulated. When we voice our joy, the joy itself is expanded. By speaking of our joy, by sharing the feelings of joy with others, the joy itself grows and multiplies beyond the original feeling.

Hence the repetition of the verb “to say.” They multiplied their articulations, their “sayings”; they repeated and expanded verbally expressing their feelings of joy. That formulation, that repeated articulation of joy, was so heartfelt, was so joyous, was so powerful, that it remains an eternal part of our heritage to this day, more than 3,000 years later.

May we always have causes for celebration with dear friends and family to articulate them together and multiply joy.

On the wedding of Esti Spitz to Meir Hess. Mazal Tov!

To the memory of a dear family friend, Efraim Steinmetz. May God console the family among the mourners of Zion and Jerusalem.