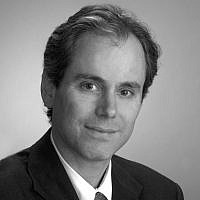 The Blogs
Rob Rosenthal
Apply for a Blog
Please note that the posts on The Blogs are contributed by third parties. The opinions, facts and any media content in them are presented solely by the authors, and neither The Times of Israel nor its partners assume any responsibility for them. Please contact us in case of abuse. In case of abuse,
Report this post.

Klein, a longtime paramedic at MDA, arrived in Kathmandu with a group of MDA paramedics a day after the earthquake devastated the city on April 25. What he saw looked hauntingly familiar.

The huge number of people in need of medical attention and the types of injuries — broken bones, crush-type compression injuries, and lacerations consistent with collapsing buildings — were the same kinds of wounds he saw five years ago after an earthquake in Haiti, when he was part of MDA’s medical-response team there. But the fact that Klein and MDA had willingly been on the scene in both catastrophes isn’t a coincidence.

“As Israelis, we’ve been blessed to live in a country with a first-world economy that has the wherewithal to weather catastrophes,” Klein said. “I think we have a responsibility to help those who are more challenged when disasters strike. As doctors and paramedics, we can make a big difference in saving lives. It’s what we do.

Increasingly, Israel, known for its high-tech sector, is exporting more than innovative software solutions these days. It’s also exporting its emergency medical response knowhow, expertise that grew out of the Second Intifada, when repeated terrorist suicide bombings between 2000 and 2005 killed more than 600 Israelis and had MDA paramedics and EMTs scrambling at times to treat dozens of seriously wounded people at the scene.

“We never had a meeting and decided that we’d become the world’s leading authority of mass-casualty incidents,” said Eli Bin, MDA director-general. “We became that out of necessity, because day after day we were faced with injured people on a scale most paramedics don’t see even once in their lifetime. And at times, our paramedics were seeing that sort of carnage several times in a month.”

Because Israel is a relatively small country, with less than 8 million people at the time (now just over 8.3 million), the bombings of the Second Intifada meant that the same paramedics were responding to one bombing scene after another. It wasn’t just that MDA was gaining experience as an organization, but individual paramedics were being exposed to repeated mass-casualty events — and learning from them.

“At first I think we were all overwhelmed,” Bin admits. “But we continually refined our protocols — for medicine, for communications, for everything — and discovered that we could function, make rational medically based decisions amid the chaos, and save a lot of lives under circumstances that would have overwhelmed a lot of other organizations, just as they had overwhelmed us at first too.”

When the bombings subsided, MDA turned its attention to teaching the world what it had learned and sent medical teams to disasters throughout the world, whether it was Thailand in the aftermath of the Indian Ocean tsunami in 2004, Haiti in 2010 (where MDA maintained a presence for more than two years), the Philippines in the aftermath of its 2013 typhoon, and now Nepal. It has trained EMTs from more than a dozen European and developing nations — including Poland, Slovakia, Nigeria, Ukraine, Kenya, and even the world’s most populous Muslim country, Indonesia. It’s even conducted training sessions for American EMS organizations, a fact that was credited by Homeland Security officials in the swift response by EMTs in the Boston Marathon bombing in 2013.

MDA was among the first foreign medical-response agencies, and the first Israeli group, to arrive in Nepal, arriving within 24 hours after the quake. MDA brought a contingent of seven paramedics and two doctors, including Klein, to treat injured Nepalese, and to treat and evacuate its own citizens from the country. Some of the Israelis they treated there had come as adventure tourists seeking to participate in Nepal’s famous treks. Others, however, some of them gay couples, had come to witness the birth of their children through surrogate mothers. It’s why one of the two doctors in MDA’s group was a pediatrician.

For MDA, these foreign missions are a chance to impart what they’ve learned about mass-casualty medicine to save lives in other countries. It’s also the manifestation of a larger sense of purpose: tikkun olam, Hebrew for repairing the world.

Half of MDA’s advance team accompanied Israelis, including more than a dozen newborns, and some preschool-age siblings, back to Israel. Six, however, remained there, taking assignments either in the Israeli Defense Forces field hospital or as part of the International Red Cross contingent, the latter option made possible by MDA being a member of the Federation of Red Cross and Red Crescent Societies.

A second team from Israel was dispatched after a second quake on May 12 wreaked further havoc on already damaged hospitals in Kathmandu. They were assigned with taking home an additional four prematurely born Israeli children.

The total number of Israeli relief workers, from MDA, the IDF, and other organizations, totaled more than 260, the largest foreign contingent in Nepal. MDA has also pledged four ambulances to the Nepalese people to help recovery efforts.

“I know MDA, its history and work,” Prasai, the Nepalese ambassador, said. “Thank you for what you did in Nepal — for the aid, the donations and means of protection for the population, and for your willingness to help and care for the Nepalese people during this difficult time.”